Singapore morning news for May 14 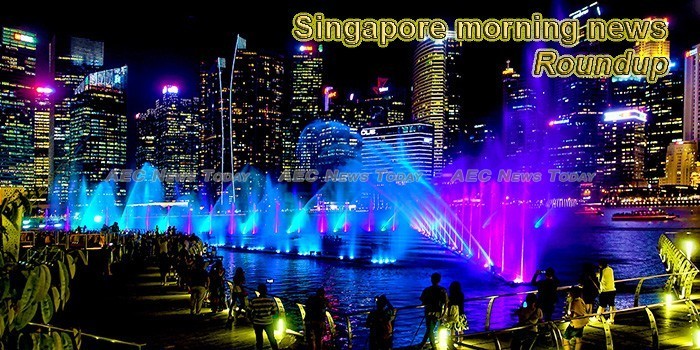 Number of Singapore billionaires falls to 39
SINGAPORE’S billionaire population declined 11.4 per cent to 39 in 2018 from 44 in 2017, largely driven by negative equity market performance, according to research firm Wealth-X’s Billionaire Census 2019.
— The Business Times

Single-payer universal insurance scheme a better alternative to the 3Ms: SDP chairman Paul Tambyah
The Singapore Democratic Party (SDP) has proposed a single-payer universal insurance scheme as a more financially viable alternative to the current 3Ms – Medisave, Medishield, and Medifund – for all Singaporeans. The proposed National Health Investment Fund (NHIF) –  which was …
— The Online Citizen

2019 Direct School Admissions and ITE early admissions exercises commence
Students interested in applying for Direct School Admission (DSA) to Junior Colleges (JCs) for admission in 2020 may do so from May 2019, the Ministry of Education (MOE) announced on Monday (13 May). It also stated that separately, applications for early admission to the Institute of Technical …
— The Online Citizen

Ayondo’s disregard of SGX order: What now?
WHEN Ayondo came to the market as the maiden pure-play fintech for the Singapore Exchange’s (SGX) Catalist platform, it was a debutante draped in a sparkling assortment of accolades as a financial services provider, trading platform and broker.
— The Business Times

Pressure on yuan may boost earnings for some SGX firms
FADING hopes of a US-China trade resolution have hit China’s currency, with some banks revising their forecasts for the currency lower as the yuan slumped to a four-month low on Monday.
— The Business Times

Man jailed 121/2 years for sexually abusing daughter
May 14, 2019 5:00 AMA Primary 2 girl who asked her father for help with her homework was made to perform a sexual act on him instead.
— Straits Times (annoying popups)

NUS student charged over latest voyeurism incident on campus
May 14, 2019 5:00 AMEven with the National University of Singapore (NUS) in the spotlight over the recent Monica Baey-Nicholas Lim issue, another one of its students was taken to court yesterday after he allegedly filmed his schoolmate showering on campus.
— Straits Times (annoying popups)

20 SMU students hurt in Vietnam bus accident
May 14, 2019 5:00 AMTwenty Singapore undergraduates on an outing after completing a service project in Vietnam were injured last Saturday when their bus hit a kerb.
— Straits Times (annoying popups)

Rain, rain, not going away
May 14, 2019 5:00 AMIt is not just the postman who has to always deliver. Even as heavy rain pelted Singapore, this GrabFood rider, struggling up the stairs near Guangyang Secondary School in Bishan yesterday afternoon, had to brave the weather to drop off food orders. As the adage goes, where …
— Straits Times (annoying popups)

Nigerians caught in KL to face charges here over love scams
May 14, 2019 5:00 AMTwo Nigerian nationals are expected to be charged in court for their alleged involvement in transnational Internet love scams.
— Straits Times (annoying popups)

Singapore surpasses China as Myanmar’s biggest investor
Singapore has overtaken China as the country’s main source of foreign investment in 2019, according to data from the Ministry of Investment and Foreign Economic Relations.
— Myanmar Times

Famous prawn noodle hawker shop looking to hire cook at S$2,500 to S$3,400
Famous 545 Whampoa Prawn Noodle hawker stall at Tekka Centre is on the lookout to employ a hardworking chef at S$2,500 to S$3,400, a salary that is above the market rate, with reasonable working hours from 5am to 2pm (9 hours, including meal breaks) for five days a week, instead of the typical six …
— The Online Citizen

Investing in Asia: Banking on Singapore
In this episode, David Kuo speaks to The Motley Fool Singapore’s Chong Ser Jing about all things Singapore, including its Big Three banks: DBS, UOB and OCBC.
— The Motley Fool

Here are Singapore’s top e-commerce apps for mobile shopping
Mobile is king in Singapore, so who was leading the e-commerce industry as of Q1 2019? When it comes to smartphones, Singapore is ranked as one of the highest globally for smartphone penetration. Various mobile app continued to rise in popularity – with the usage and need of shopping online …
— e27

Lab-grown meat that’s simply Shiok
THE future of food may lie in lab-grown cell-based meat. And it’s not just plant-based meat patties in burgers that are taking the world by storm. On March 29, Shiok Meats unveiled its first ever cell-based shrimp dumpling at The Disruption in Food and Sustainability Summit (DFSS).
— The Business Times

Singapore bank shares slide on brokers’ downgrades
DBS shares closed down 2.07 per cent, or S$0.55 at S$26.00 following Citi Investment Research’s downgrade of its shares to neutral from buy on Monday.
— The Business Times

Probation for man who groped boy in church toilet
May 14, 2019 5:00 AMA volunteer at a church student-care centre lured a 10-year-old boy to a toilet at the place of worship last July and committed an indecent act on the child.
— Straits Times (annoying popups)

Singtel’s Indonesia partner launches $54.7m fund
May 14, 2019 5:00 AMSingtel’s regional associate in Indonesia has created a new fund with an initial budget of US$40 million (S$54.7 million) to invest in start-ups around the region and undertake other initiatives.
— Straits Times (annoying popups)

Mixed reaction to the idea of banning PMDs at void decks and footpaths
Singapore – The cases of PMD-related road accidents are increasing so rapidly that citizens and the government are considering banning these personal mobility devices. Two months ago, a 70-year-old woman was almost run over by a PMD rider who passed her too closely. More recently, a 65-year-old …
— The Independent

People’s Bank of China and Monetary Authority of Singapore renew Bilateral Currency Swap Arrangement
Singapore and China have renewed the Bilateral Currency Swap Arrangement (BCSA) worth CNY300 billion (S$60 billion), which was said to strengthen regional economic resilience and financial stability. The new agreement was announced by the People’s Bank of China (PBC) and the Monetary Authority of …
— The Online Citizen

The Big Read: Run-down but not out — old iconic shopping centres find a way into Singaporeans’ hearts
Queensway, Tanjong Katong Shopping Centre and Peninsula Plaza – many have developed a unique identity and loyal following, while reinventing themselves and drawing younger customers over the decades.
— Channel NewsAsia (very annoying popups)

Cab companies could be allowed to bid for COEs
May 14, 2019 5:00 AMTaxi operators may soon be allowed to compete with car buyers for certificates of entitlement again – a move which may fuel competition for COEs.
— Straits Times (annoying popups)

Patients with chronic conditions like stroke could double by 2050: NHG report
SINGAPORE: The number of stroke patients living in the central part of Singapore could increase by 109 per cent – or more than double – by 2050 if left unchecked, according to a new report released on Monday (May 13) by the National Healthcare Group (NHG).
— Channel NewsAsia (very annoying popups)

55% of 19-year-olds in S’pore surveyed think euthanasia should be legal
They also shared their views on other contentious issues.
— Mothership

Global Times lauds PM Lee and George Yeo’s statements on China’s May 4th movement
Singapore — The Global Times, China’s nationalist media outfit, recently lauded Singapore Prime Minister Lee Hsien Loong and former foreign minister George Yeo for the remarks they both made concerning China’s May Fourth Movement. This is quite unusual for the Chinese tabloid, as it has taken …
— The Independent

Singapore morning news for May 6