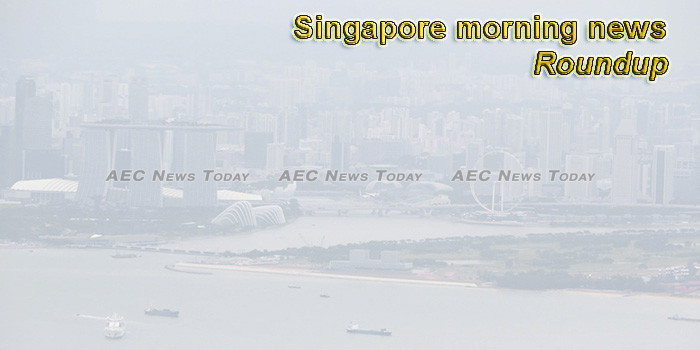 Singapore employees seek 17% pay raise when switching jobs: report
JOB seekers in Singapore are looking to get a 17 per cent bump in pay when they switch jobs, after averaging across industries and levels, said a report by RGF International Recruitment.
— The Business Times

Tag-team tack keeps Singapore businesses sustainable, fighting fit
AS companies recognise the need to innovate and transform their businesses to remain sustainable and competitive, partnerships between traditional enterprises and innovative tech startups are proving key in achieving these goals.
— The Business Times

Officer said he was instructed to push NSF, says witness
A Singapore Civil Defence Force officer who was jailed for pushing a man into a fire station pump well owned up right away when the station commander asked how the full-time national serviceman had fallen into the well, but said he had been instructed to do so by another officer.
— Straits Times (annoying popups)

More manpower support for growing aviation sector
WITH its good growth momentum even as some other sectors show weakening, aviation is an important hedge in Singapore’s diversified economy, said Manpower Minister Josephine Teo.
— The Business Times

Boy, 9, hurt by e-scooter while alighting from bus
A nine-year-old boy was getting off a bus in Jurong East when an e-scooter knocked into him.
— Straits Times (annoying popups)

Aim is for a drug-free society, not a drug-tolerant one: CNB
Drug consumption is an offence that can result in jail time and a fine, but most users here who have tested positive will be committed to treatment at a Drug Rehabilitation Centre (DRC) for their habit instead of having to face a charge in court.
— Straits Times (annoying popups)

PMD left to charge in flat bursts into flames
A personal mobility device (PMD) left to charge in an Ang Mo Kio flat yesterday exploded in the afternoon, according to an eyewitness, before a fire destroyed the flat and damaged two neighbouring units.
— Straits Times (annoying popups)

Build bridges for connectivity of ideas, tech and trade: Chan Chun Sing
The world has made tremendous progress by being connected, and the challenge facing the younger generation is to decide whether to build further bridges or erect walls that will stall development, Trade and Industry Minister Chan Chun Sing said yesterday.
— Straits Times (annoying popups)

Changi Airport Group reshapes work with digital push
Workplaces have long been rigid spaces where staff sit at fixed desks for fixed hours, doing the same role for what could feel like a lifetime – but that concept is quickly going out the window at Changi Airport Group (CAG).
— Straits Times (annoying popups)

SCDF ragging death: Trial starts for man accused of asking officer to push NSF Kok Yuen Chin into well
A man accused of instigating a Singapore Civil Defence Force (SCDF) colleague to push a full-time national serviceman into a well had been eating cake before the incident and did not hear the victim’s protests.
— Channel NewsAsia (very annoying popups)

Teo Soh Lung: Violence and peaceful protests in Singapore
Watching television yesterday about the protests in Hong Kong and the violence that erupted late in the night, I cannot help reflecting on Singapore’s history.
— The Online Citizen

2 Singapore REITs That Have Increased Dividends This Quarter
These two large REITs have grown their DPU recently as they both released solid earnings. Click here to find out more.
— The Motley Fool

3 Rock-Solid High-Yield Dividend Shares in Singapore
Want to invest in strong companies that have high dividend yields? Look no further. Here, we reveal three such Singapore stocks.
— The Motley Fool

Ex-SMRT chief: Expect, prepare for crises
Amid the massive train disruption that affected more than 250,000 commuters on July 7, 2015, then-SMRT chief executive Desmond Kuek had to make a call: should he shut down the North-South and East-West lines?
— Straits Times (annoying popups)

MBS to kick off annual charity festival in August
From Aug 2 to 4, members of the public will help to raise funds for over 80 charities in Singapore when they visit selected attractions at Marina Bay Sands.
— Straits Times (annoying popups)

Joining hands to celebrate diversity
Pupils of Westwood Primary School celebrating Racial Harmony Day at school yesterday. Racial Harmony Day, which falls on July 21, was launched by the Ministry of Education in 1997 as part of the National Education programme.
— Straits Times (annoying popups)

3 Charts to Reveal the State of the Oil and Gas Industry Right Now
Investors who are pondering if they should start looking at the oil and gas industry should take note of these three charts which provide guidance on the state of the industry.
— The Motley Fool