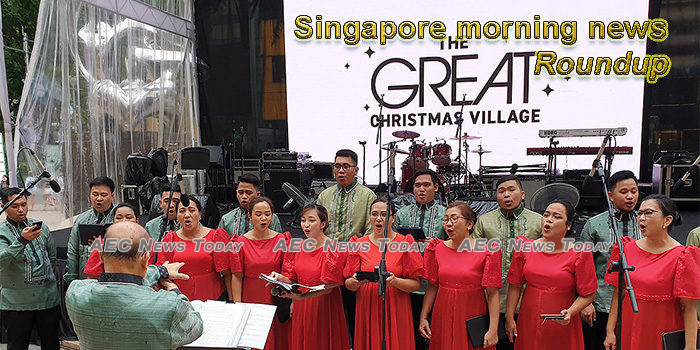 5G roll-out high on telecom industry’s agenda in 2020
SINGAPORE’S unprecedented bidding exercise for 5G network licences will be the hottest development for telcos in 2020 – even if it is unclear what hand each company plans to reveal.
— The Business Times

Wolbachia delivers a toxin-free death blow to rocketing dengue rates (video)
As the number of confirmed deaths from dengue in the Philippines this year broke through the 1,500 barrier last month, scientists and health officials meeting in Maryland, USA, were being shown compelling evidence that the days of the debilitating disease are numbered.
— AEC News Today

Which areas in Singapore have more Aedes mosquitoes? There’s an app for that
Members of the public can now use an app to check if they live in an area with lots of mosquitos, as part of the authorities’ push to tackle dengue in Singapore.
— Channel NewsAsia (very annoying popups)

Critically endangered monkey that calls Singapore home
In the small cluster of forests left in the Central Catchment Nature Reserve, a black-and-white monkey lives on the brink of extinction.
— Straits Times (annoying popups)

Singapore’s renewed love affair with Aussie property driving acquisitions
SINGAPORE investors’ love for Australian real estate was rekindled this year, with acquisitions up 20 per cent to US$3.4 billion driven by the transparent and deep market, good yields, freehold opportunities and cheap currency.
— The Business Times

Faced with PSLE anxiety, boy finds help – and joy – from therapy dogs
Animal-assisted therapy is relatively new in Singapore, but some are turning to it to help them improve their emotional well-being. On The Red Dot finds out how well it can work.
— Channel NewsAsia (very annoying popups)

Mock skyscrapers, simulated rain at Singapore self-driving test centre
The road sweeper and a golf buggy move around the track with ease, jamming their brakes on when a pedestrian steps out and negotiating sharp turns.
— The Online Citizen

‘The solution is doing right by one’s conscience and the law’: Former Auditor General publishes book
ver 30 years ago, officers from the then Singapore Customs and Excise Department took extraordinary steps to recover $8.15 from the crew member of a boat who was mistakenly given an extra day’s wages.
— Straits Times (annoying popups)

What is a digital bank?
A digital bank offers banking services such as deposits, loans, debit and credit cards like a traditional bank, except that transactions are performed online and the bank does not have a physical branch.
— Straits Times (annoying popups)

Climate change, floods and drought: Here’s how badly Singapore could be affected
Singaporeans might see the effects of the climate crisis sooner than they think, and the impact could be worse than expected, as the programme Why It Matters finds out.
— Channel NewsAsia (very annoying popups)

Malay-Muslim community to be consulted on more issues that concern them: Masagos
Malay-Muslims will get more say in Singapore’s policy-making, in line with the Government’s overall strategy for the future, said Mr Masagos Zulkifli in a media interview pertaining to issues to do with the community on Tuesday (Dec 17).
— Channel NewsAsia (very annoying popups)

Crowe Singapore sees opportunities in uncertainty
ECONOMIC uncertainty is probably the bane of most companies. But for accounting and advisory services firm Crowe Singapore, it offers a silver lining.
— The Business Times

83-year-old businessman duped of S$120,000 in gold ingot scam
The police on Friday (Dec 20) advised the public to be wary of a scam involving the sale of fake gold ingots.
— Channel NewsAsia (very annoying popups)

The flip side of heartwarming story on N-Level student who passes despite intense hardship
N-Level results were released yesterday (19 December) with students from the Normal (Academic) stream maintaining a pass rate of 99.5% while those in the Normal (Technical) stream shone with a pass rate of 98.1%.
— The Online Citizen

POFMA, a blank cheque for the government to defame?
Just last week, the Ministry of Manpower (MOM) issued three correction orders under the Protection from Online Falsehoods and Manipulation Act (POFMA), upon Singapore Democratic Party (SDP) over three online postings made by the party.
— The Online Citizen

Needy families in Woodlands get a helping hand from bikers and other groups
Every December is a trying time for Madam Flora Yong.
— Straits Times (annoying popups)

Gifts from public bring festive cheer to migrant workers
The season of giving is upon us and non-governmental organisations are helping migrant workers this festive season.
— Straits Times (annoying popups)

300 students get back-to-school gear, thanks to Sembawang youth
Nearly 300 students between the ages of seven and 21 received new school bags, stationery and $100 worth of bookstore and supermarket vouchers yesterday.
— Straits Times (annoying popups)

Abandoned Viet baby treated at KKH in 2017 dies
An orphaned Vietnamese baby who was treated in a Singapore hospital two years ago has died.
— Straits Times (annoying popups)

Bursaries for 320 children of current and former offenders
Things were looking grim for Dani earlier this year when his teacher told him he might not be able to make it to secondary school next year as he scored less than 20 out of 100 in maths, his weakest subject.
— Straits Times (annoying popups)

Time to stop blaming SGX, look beyond it
Since joining the securities industry in 1993, I’ve heard people complain about how dull and moribund the Singapore stock market is, usually blaming the regulators.
— Straits Times (annoying popups)

Pet insurance market still young in Singapore
Pets can rack up big medical bills as they get older, but few owners have plans to buy insurance for them.
— Straits Times (annoying popups)

MSF to review assistance for single-mother after report of attempted suicide for CPF monies surfaced
TOC reported earlier this week that a Singaporean woman, Ms Soo (not her real name), attempted suicide out of desperation of her dire family’s financial situation.
— The Online Citizen

S’porean solemniser did weddings in McDonald’s, HDB flats, & helped a couple avoid divorce
Pauline Sim hopes to be a wedding solemniser for as long as she can.
— Mothership

Gambas Avenue accident: GrabFood rider was working part-time to support ill wife and family
The GrabFood delivery rider who died in an accident in Gambas Avenue last Friday (Dec 20) had been working two jobs to support his family, which comprised his wife and 11-year-old daughter.
— Straits Times (annoying popups)

‘Happiness is a sin’: S’porean youth shares what it’s like to live in a neighbourhood with drug addicts & gangs
Farah was just 11 years old when she started noticing drug needles and blood stains around her block every day.
— Mothership

Locals in 1930s S’pore were barred from using the same toilet as the British
Soft truths to keep Singapore from stalling.
— Mothership

Doing away with wrapping paper and upcycling discards: How some families are reducing waste this Christmas
Ms Sheri Goh has a big family. She has an elder sister and 13 cousins just on her mother’s side.
— Channel NewsAsia (very annoying popups)

Visually impaired gear up for race to raise funds
A retina detachment may have made her vision cloudy, but Ms Ong Mei Ching hopes to defy misconceptions of those who are blind or visually handicapped.
— Straits Times (annoying popups)

Female inmates write love stories to their kids
A seedling needs sun and rain to grow into a tall tree and, to Hamizah (not her real name), her two sons are exactly what she needs for strength.
— Straits Times (annoying popups)