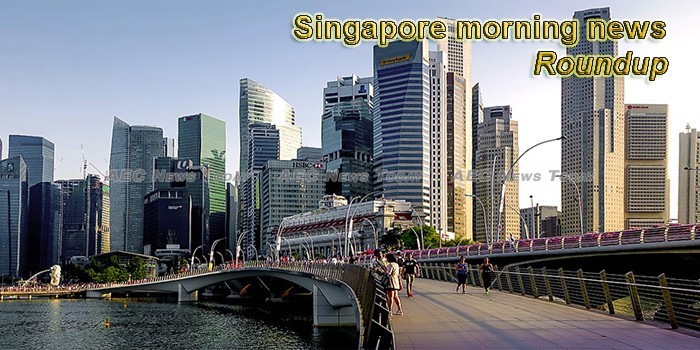 Singapore Q1 GDP growth hits decade low
SINGAPORE’S economy is growing at the slowest clip since the global financial crisis, according to flash data for the first three months of the year.
— The Business Times

Massive cost overrun in infrastructure projects in Singapore in recent years
The media reported on Thu (‘Final stage of Circle Line to cost $4.85b’, 11 Apr) that the final stretch of Circle Line which would add three more stations linking Marina Bay to HarbourFront is expected to cost $4.85 billion. But in 2015, it was projected that it should cost only $3.7 …
— The Online Citizen

$163.5m upgrading works to better fight tunnel fires
Works are under way to equip two underground roads here with the latest fire-fighting system, and the $163.5 million project is slated to be completed by 2022.
— Straits Times (annoying popups)

116 cameras for Changi’s ‘smart digital tower’ trial
There are 116 cameras along the two runways at Changi Airport, as Singapore prepares for a trial later this year – the first of its kind that could change the way major airports handle flights.
— Straits Times (annoying popups)

Growing drug scourge of new psychoactive substances
Bartender Mabel used to mix more than just drinks. After her 9am to 10pm shift at a bar in a large hotel, then waitressing from 11pm to 3am, she would go home to shoot up cocktails of drugs that she concocted herself.
— Straits Times (annoying popups)

‘Big decision for country’: Indonesians in Singapore turn up in droves to vote in elections
The neighbourhood was quiet as my ride turned into Chatsworth Road, but it was the proverbial calm before the storm.
— Channel NewsAsia (very annoying popups)

S’pore’s alleged use of too much Cambodian sand to reclaim land highlighted again in recent documentary
Thanks to a short 16-minute film put up online recently, the little red dot has come under the spotlight again.
— Mothership

WhiteCoat clinches AIA group healthcare deal
DIGITAL healthcare start-up WhiteCoat has inked a partnership with AIA to become the insurer’s exclusive telehealth provider for its corporate client base of 1.2 million employees and their dependants.
— The Business Times

Be discerning on funds’ income payouts
INVESTING with a view to generating income is a key building block for long-term portfolios.
— The Business Times

MPA pumps in S$650,000 for startups to develop innovative maritime solutions
THE Maritime and Port Authority of Singapore (MPA) is investing S$650,000 in seed funding for tech startups to develop innovative solutions to address key maritime challenges in Singapore, MPA and NUS Enterprise announced on Friday. NUS Enterprise is the entrepreneurial arm of the National …
— The Business Times

Facebook, WhatsApp, Instagram down for users globally including Singapore
Facebook and its related apps Instagram and WhatsApp went down on Sunday evening (April 14), with several users taking to other social media to say they were experiencing difficulties.
— Straits Times (annoying popups)

‘They are all winners in our eyes’: How being judged in SYF alongside mainstream schools helped Pathlight students build confidence
This year’s Singapore Youth Festival Arts Presentation was opened up to all special education schools for the first time – and they were held to the same standards as their mainstream peers.
— Channel NewsAsia (very annoying popups)

New night event to kick off on Orchard Road next month
Visitors to Orchard Road will soon be able to grab a bite from a food truck and catch a street performance under the stars.
— Straits Times (annoying popups)

Maid arrested after parents identified her flinging 5-year-old son to the ground in viral Facebook video
She did not explain or apologise for her actions.
— Mothership

The reality of voters voting out governments is not as straightforward as what some put it to be
In a state media interview with Channel News Asia (CNA), Minister of Home Affairs and Law, K. Shanmugam was quoted as attempting to assuage public fears about the abuse of power by claiming that his government is accountable because Singaporeans have the power to vote them out in an …
— The Online Citizen

Gardens by the Bay launches more public spaces, free entry for Pioneer and Merdeka generations once a month from June
Bayfront Plaza was launched on Sunday as part of efforts to expand the Gardens’ non-ticketed spaces and line-up of events and programmes for locals.
— Straits Times (annoying popups)

Singapore not origin of meth seized in Australia
A shipment of 585kg of methylamphetamine, or Ice, which the Australian authorities found concealed in fridges, did not originate from Singapore.
— Straits Times (annoying popups)

Academics Against Disinformation: Singapore’s proposed online falsehoods law may deter scholarship and set precedents harmful to global academia
Academics based in various universities have issued a joint statement to express their concerns over the proposed online falsehoods law on how it will have unintended detrimental consequences for scholars and research in Singapore, compromising its efforts to develop itself into an …
— The Online Citizen

16 weeks’ jail for site supervisor who coerced worker to take blame for fatal workplace accident
A site supervisor for construction company ZAP Piling was sentenced to a total of 16 week’ imprisonment for offences related to a fatal workplace incident on Jun 9, 2016, a press release from the Ministry of Manpower (MOM) said on Saturday (Apr 13).
— Channel NewsAsia (very annoying popups)

Why A Passive Income Is Not Just For Retirees
Generating a second income could be useful for investors whatever their age.
— The Motley Fool

The egg freezing dilemma of women in Singapore
Only women with medical grounds are allowed to freeze their eggs, even as the fertility rate drops to a record low. Talking Point looks at some of the social and moral issues.
— Channel NewsAsia (very annoying popups)

George Yeo: Retiring from overseas career. Returning to politics?
THE grape-wines and gossip mills have been running overtime ever since George Yeo shared on Facebook on Friday that he’s coming home, having finally decided to put family first over career. The former Singapore Foreign Minister, going on 65, feels it’s ripe time to call it a day as the chairman …
— The Independent

Experts welcome laws to give faster relief to victims of falsehoods
Fake news has made some companies lose business, jeopardised relationships and even put some in harm’s way.
— Straits Times (annoying popups)

Before Jewel: Remembering Changi Airport Terminal 1’s debut 38 years ago
When it opened in 1981, one in 10 Singaporeans went to check out its gardens, iconic water feature and food offerings. Some things never change.
— Channel NewsAsia (very annoying popups)

Exhibition traces Arabs’ vital role in early Singapore history
When Singapore was established as a trading port in 1819, the British were keen to attract Arab traders to these shores.
— Straits Times (annoying popups)

Business lost, safety threatened because of fake news
Ms May Liu’s halal-certified yong tau foo stall at Westgate mall was open for just six months when it was rocked by fake news alleging that it sold a pork dish.
— Straits Times (annoying popups)