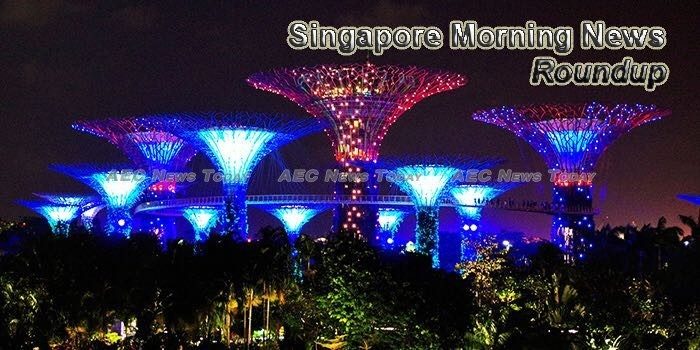 Singapore company emerges as market leader in cryptocurrency offerings
Singapore’s PLMP-Fintech is becoming the service provider of choice among ICO candidates after proving its ability to launch ten new ICOs in a single month.
— The Nation

Singapore-Brunei Security Ties in Focus with Presidential Visit
This weekend, Singapore President Halimah Yacob paid her first state visit to Brunei. Though her visit had a wide-ranging agenda, the recent high-level interaction between the two Southeast Asian states also featured the defense aspect of their ties.
— The Diplomat (paywall)

Staid Singapore prepares for historic Trump-Kim summit
Singapore, a highly manicured city-state shaped by skyscrapers and luxury hotels, is preparing for perhaps the most crucial international diplomatic event of the decade.
— News Observer

New guidelines to fight money laundering and financial crime in Singapore
TO LAUNDER money through round-tripping, a South Asian conglomerate used 10 subsidiaries to swiftly shift funds of no more than US$20 million each time over just two months between these units.
— The Business Times

MP suggests changing valuation method for ageing flats to raise demand
With owners of older HDB flats worried about the value of their homes as their leases shorten, Ms Cheryl Chan, Member of Parliament for Fengshan constituency, proposed taking a “multi-prong” approach to help sellers and buyers by changing the valuation method for ageing units and extending the lease for flats in mature towns of selected precincts.
— Today Online

New system to show commuters crowd levels on trains
A new system that can help channel commuters to less crowded train cars is being piloted along the Downtown Line by the Land Transport Authority (LTA) starting on Monday (May 14).
— Channel NewsAsia

Malaysian leaders slam The Straits Times for ‘fake news’ that aims to “drive a wedge” between new coalition govt and the people
One of the parties in the new coalition government of Malaysia has slammed The Straits Times for publishing “completely fabricated and false” claims that they believe is an attempt to “drive a wedge” between their party, the new ruling Pakatan Harapan coalition and the people.
— The Independent Singapore

Singapore must have strongest leadership team for others to ‘take us seriously’: Chan Chun Sing
Singapore must have the strongest leadership team possible for others to “take us seriously and be willing to work with us”, Trade and Industry Minister Chan Chun Sing said on Monday (May 14) during the debate on the President’s address.
— Channel NewsAsia