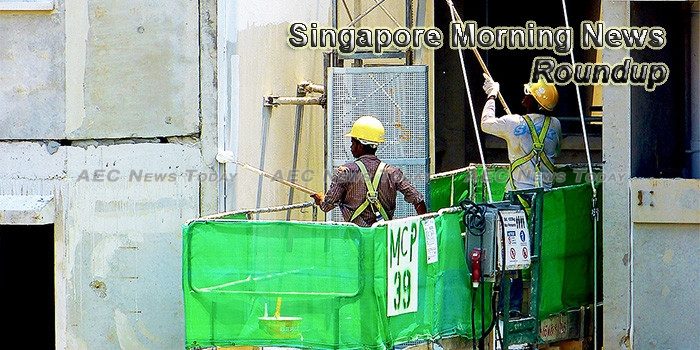 Another star showing by electronics likely to upgrade Q3 GDP growth
THE predicted slowdown of Singapore’s manufacturing output has not come in as sharply as economists feared for the month of September, as the electronics cluster continued to power ahead with double-digit growth.
— The Business Times

Singapore reinvents itself as Asia’s fintech hub
REMITTANCES to developing nations by migrants working abroad have long been an important lifeline for these countries. In Asean, which celebrates its 50th anniversary this year, remittances have contributed to the ongoing economic development and alleviation of poverty in the regional group.
— The Business Times

Singapore aims to finish its own cryptocurrency trial next year
Singapore will conclude its experiment with blockchain technology and its own digital currency next year before deciding whether to commercialize the trial, the country’s regulator has told CNBC.
— CNBC

Amazon’s latest way into your life is through the front door
FOR many online shoppers, packages often linger for distressingly long hours outside their homes, where they can be stolen or soaked by rain. Now, if customers give it permission, Amazon’s couriers will unlock the front doors and drop packages inside when no one is home.
— The Business Times

US visit has been useful; hope it will keep America ‘more focused and engaged in the region’: PM Lee
Prime Minister Lee Hsien Loong described his official working visit to the US as “useful” and said the Americans were “receptive to talking to us, hearing our views, getting a perspective of the region and what we would like the United States to do.”
— Channel NewsAsia

81% of Singapore IT Professionals concerned about email-based attacks, according to Phishing Trends Report
Today PhishMe®, the leading provider of human phishing defence solutions, released the results of its Singapore Phishing Response Trends Report, which looked at the phishing response strategies of IT security decision-makers across a variety of industries in the Singapore region.
— Business Insider

Singapore named most robust data center market
Despite a large amount of supply coming through 2015–2016, the data center market in Singapore continues to lead some of its large neighbors in the Asia-Pacific (APAC) region in a race to the top of data center location rankings.
— TelecomAsia

Singapore passport gets new design, security upgrade
The Singapore biometric passport is getting a facelift and a security upgrade, according to the Immigration and Checkpoints Authority on Thursday (Oct 26).
— Channel NewsAsia

More than S$22m lost in online scams in first half of 2017: Police
900 cases of e-commerce scams and 349 cases of love scams were reported in the first six months of the year, with victims being cheated more than S$22 million in total – and the rising trend of online scams has continued in the second half of the year, the police said in an advisory on Thursday (Oct 26).
— Channel NewsAsia

Low chance of transboundary haze: NEA
The recent hazy conditions here are due to accumulated particle matter under light winds, according to the National Environment Agency (NEA).
— The New Paper

Death penalty an important tool in drug fight: Shanmugam
The death penalty is not the solution that solves all problems, but part of a larger framework that includes reducing the drug supply and rehabilitating offenders, said Home Affairs and Law Minister K. Shanmugam yesterday.
— The New Paper

Singapore ‘well-positioned’ as bellwether of global trends: Ong Ye Kung
As a small country with an open economy, Singapore is a “bellwether of emerging trends” and can offer other countries fresh perspectives on how to tackle problems, said Minister for Education (Higher Education and Skills) Ong Ye Kung.
— Today Online

SGX chief bullish on bourse’s Saudi Aramco IPO chances
Singapore Exchange Ltd.’s chief executive officer said his company is still in the running to win a listing of the shares of oil giant Aramco, in what could be the world’s biggest initial public offering.
— DealStreetAsia