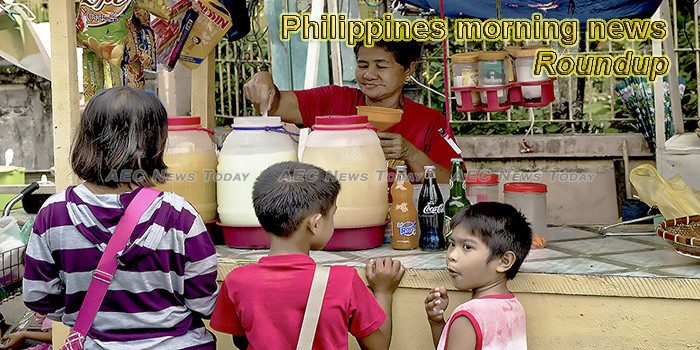 External debt service up 6% in November
The Philippines’ external debt service burden as of end-November 2018 was up six percent to $7.199 billion compared to $6.786 billion same time in 2017 on account of new borrowings to fund various infrastructure projects, the central bank’s latest data showed.
— Manila Bulletin

Philippines and Indonesia lead region in 2018 antitrust activity says report
Governments globally are stepping up efforts to ensure level playing fields and stamp out anticompetitive behaviour and regionally it is no different.
— AEC News Today

Measles cases breach 8,000-mark over a week since outbreak
A week after a measles outbreak was declared in several regions in the country, over 8,000 cases have been recorded, according to the Department of Health (DOH).
— Rappler

Journalists reiterate call to decriminalize libel
Journalists are reiterating the call for the decriminalization of libel in light of a case that has led to the arrest of a high-profile journalist for cyberlibel.
— The Philippine Star

NFA overhaul on fast track; rice tariffs set March 3
As government moves to tariffy imported rice effective March 3, it will now fast track the restructuring of the National Food Authority (NFA) in line with its goal to reduce the price of the grain as soon as possible.
— Malaya

Asean think tank expects Philippines to grow by 6.4% this year
The Philippine economy is expected to rebound with a 6.4-percent growth in 2019, faster than 6.2 percent in 2018, on the back of major infrastructure projects, the research unit of the Association of Southeast Asian Nations Plus Three said in a report.
— Manilastandard.net

Philippine economic growth to lead Asia in 2019: HSBC
The Philippine economy will continue to grow faster than its Asian peers this year, notwithstanding global and local risks, HSBC said Monday.
— ABS-CBN News (video)

Duterte calls for lifting of bank secrecy after vetoing general tax amnesty
President Rodrigo Duterte has vetoed a provision under the newly-signed Tax Amnesty Act of 2019 which provides for a general amnesty program for taxpayers with deficiencies.
— CNN Philippines

Mislatel rollout hit by lack of franchise
The Mislatel consortium’s rollout of commercial services could be delayed as both houses of Congress — currently on a break for the mid-term elections — still have to reconcile their versions of the third telco’s franchise.
— The Manila Times

Neda committee approves P1.3-billion support for PCC
The Investment Coordination Committee-Cabinet Committee of the National Economic and Development Authority approved a P1.3-billion project to upgrade the capacity of the Philippine Competition Commission.
— Manilastandard.net

Italy extends PH dev’t loan for another 2 yrs
The government of Italy has agreed to extend its development assistance for the Philippines for another two years that would benefit Filipinos working in the agriculture sector, the Department of Finance (DOF) said yesterday.
— Manila Bulletin

Senate bets blame TRAIN law, NFA mismanagement for inflation
The rising prices of goods can be attributed to excise tax imposed on fuel under the Tax Reform for Acceleration and Inclusion (TRAIN) law, senatorial candidates said Sunday.
— The Philippine Star

Arroyo moves to reinvigorate Roro shipping, lower food transport cost from Mindanao
To bring down the cost of transporting goods and commodities from Mindanao to other parts of the country via the roll-on, roll-off (Roro) shipping system, the leadership of the House of Representatives has bared the opening of seven Roro route this year.
— Business Mirror

Cagayan villages get P500k each via NTLB fund
Cagayan Gov. Manuel N. Mamba recently spearheaded the distribution of financial assistance under the “No Town, No Barangay Left Behind Program 2018 Fund” in Ballesteros town.
— Manilastandard.net

BSP sees more OFWs saving via ‘PiTaKa’ program
THE government and the private sector have joined forces to encourage more overseas Filipino workers (OFWs) to save, as only 3 out of 10 workers and their families are able to allot a portion of their funds for savings.
— Business Mirror

USAid conducts workshop on social media promotion
THE United States Agency for International Development (USAid) in partnership with the city government conducted a workshop on how to promote and improve the city’s online payment system in various social media channels.
— Sun Star

Court set to uphold martial law extension
THE Supreme Court is set to deliberate and vote on Tuesday on the petitions assailing the declaration of President Rodrigo Duterte to prolong martial law in Mindanao, and Congress for agreeing to it.
— The Manila Times

Davao City to build P5M dog pound
THE CITY government is aiming to complete before the end of the year a P5-million impounding facility in Malagos, Calinan to accommodate more stray cats and dogs.
— BusinessWorld Online

‘P10-billion fund to ease drop in rice prices’
MALACAÑANG on Monday told farmers that they will have to bear with the drop in farm-gate prices of unmilled rice, at least until the government releases the entire amount of a fund that will bankroll interventions for the rice sector.
— Business Mirror

Philippines Expands Central Bank Supervisory Powers
Amendments to the BSP’s charter will boost its capitalisation and extend its supervisory remit to all financial institutions in the country.
— Regulation Asia

Palace defends DBM amid allegations gov’t owes contractors P100B
Rep. Rolando Andaya Jr. claimed that the Budget and the Public Works departments owe contractors about P100 billion because of a system that forces them to give kickbacks for completed projects.
— Philippine Star

Death penalty ‘anti-poor, not even fit for terrorists’ — oppositition senatorial bets
OPPOSITION senatorial candidates were firm in their position against the death penalty amid moves in government to reinstate it to reduce crime rate in the Philippines.
— The Manila Times

Baguio conducts house-to-house vaccination
The City Health Services Office (HSO) is calling on the public to bring their children, ages six to 59 months old, to any health center in the city or wait for health workers doing house-to-house free vaccination that started on Feb. 18.
— Philippine News Agency

Proposal to ease bank secrecy still a hurdle for general tax amnesty
SENATOR Panfilo M. Lacson on Monday said he will support the passage of a general tax amnesty bill in the 18th Congress, but noted that lawmakers may still be “wary” of easing bank secrecy laws, as requested by President Rodrigo R. Duterte in his veto message last Friday on this measure.
— BusinessWorld Online

NFA employees going to Supreme Court
Workers of the National Food Authority are exhausting legal options before the Supreme Court following the enactment of the rice import liberalization law, which threatens the jobs of about 4,000 employees of the NFA.
— Philippine Star

World Bank sees BSP rate cuts as inflation further eases
To support economic growth, it would be prudent for the Bangko Sentral ng Pilipinas to cut policy rates once headline inflation falls below target, an economist of the World Bank said.
— The Philippine Star

Palace says Duterte has no links with complainant in Maria Ressa’s libel case
President Rodrigo Duterte had no links with the businessman who filed a cyber libel complaint against Rappler CEO Maria Ressa which became the basis for her arrest last week, Malacañang said Monday.
— GMA News

Senators question use of PCOO caravan in Europe to explain Maria Ressa arrest
Why use a government information drive to defend the government’s stance on Rappler CEO Maria Ressa’s arrest?
— Rappler

Rice retailers group fears grain imports monopoly amid passage of Rice Tariffication Law
The Alliance of Filipino Farmers and Retailers Association (AFFRA) president Danilo Garcia expressed concern on Monday over the possibility of monopoly in rice importation on the heels of the recent enactment of the Rice Tariffication Law in the country.
— GMA News

Palace tells Congress to pass new tax amnesty law that will prevent fraud
President Duterte signed the tax amnesty law last February 14 but vetoed some items including a provision that would have granted general amnesty for all unpaid internal revenue taxes.
— The Philippine Star

Families of desaparecidos slam PH plan to delist cases from U.N.
Families of victims “strongly object” to the move of the Philippine government to have official records of enforced disappearances deleted from the United Nations (UN).
— Rappler

Gov’t committed to ensure tourists’ safety
Despite the recent Jolo bombings that prompted the issuance of fresh foreign travel advisories on the Philippines last month, the Department of the Interior and Local Government (DILG) assured on Monday foreign tourists the government is committed to their safety and security in the country.
— Philippine News Agency

AMRO sees PHL resilient vs 2019 risks
PHILIPPINE economic growth will likely pick up this year, a regional think tank said in a report released on Monday, even as it advised monetary and fiscal authorities to be mindful of short-term external risks and keep interest rates “appropriately tight.”
— BusinessWorld Online

Sara to announce decision on presidency in Jan. 2021
Presidential daughter and Davao City Mayor Sara Duterte will announce in January 2021 whether she will give in or thumb down the clamor for her to seek the presidency.
— Tempo

Kenneth Dong pleads not guilty in P6.4-B drug smuggling case
The alleged middleman in the P6.4-billion shabu shipment from China appeared for his arraignment before a Manila Regional Trial yesterday afternoon.
— Tempo