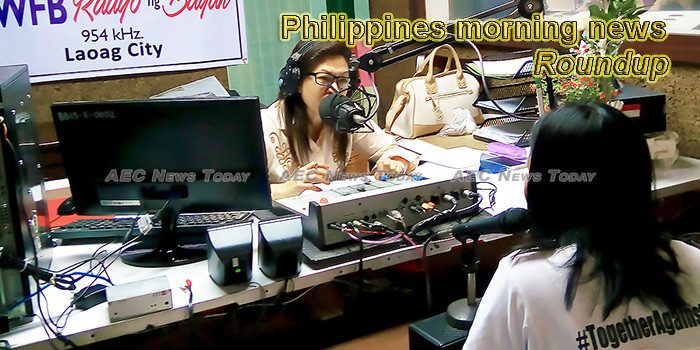 DOH: Over 4K measles cases, 70 deaths in Philippines
In just more than a month, over 4,000 people have contracted measles with 70 people reported deaths because of the disease, the Department of Health (DOH) said Monday.
— Inquirer.net

Philippines’ talent edge slips in index
THE PHILIPPINES led lower-middle-income economies in a 2019 talent competitiveness survey, in which the country nevertheless posted a lower score and rank compared to the previous year.
— BusinessWorld Online

D.O.T. retains foreign visitors goal but likely to adjust local tourism figures amid upswing
THE Department of Tourism (DOT) is retaining its foreign tourist targets, after all.
— Business Mirror

Budget qualifier scraps funding for Chinese video
Congress has qualified through a provision that the unprogrammed funds in the P3.7-trillion General Appropriations Bill (GAB) for 2019 will not be used for Chinese and other foreign-funded projects that lack feasibility studies or have been unilaterally approved by the executive branch.
— The Philippine Star

The Philippines gets P23.8 million US grant for broadband project
The US government has given a P23.8-million grant to the Philippines to assist the Department of Information and Communications Technology (DICT) in designing the P72-billion national broadband network (NBN) the government wants to build to provide internet connectivity even in the country’s far-flung areas.
— The Philippine Star

ADB ‘repackages’ $500-million Metro transport development plan
The Asian Development Bank (ADB) said it is preparing new rail-based projects for Metro Manila, as well as bridges, among others, to address congestion in the megacity.
— Business Mirror

Duterte agrees: PH should be called ‘Republic of Maharlika’
PRESIDENT Rodrigo Duterte on Monday, February 11, said he was amenable to the proposal to rename the Philippines to “Maharlika.”
— Sun Star

Measles outbreak: 70 dead
The number of dengue cases is rising even as the government scrambles to deal with a measles outbreak with 70 confirmed deaths, a Health official said Monday.
— Manilastandard.net

US, Japan commit support for PHL’s fight vs terrorism
THE UNITED STATES has committed over P300 million in “intelligence support” to the Philippines, Malacañang announced on Monday.
— BusinessWorld Online

LGUs urged to develop MICE market for tourism
The country’s meetings, incentives, conventions and exhibition (MICE) sector should be developed at the local level for the sector to thrive across the Philippines.
— The Philippine Star

Palace stresses Duterte will not allow use of any gov’t fund in poll campaign
Malacañang on Monday reiterated President Rodrigo Duterte’s stand that no government fund shall be used in support of or against any candidate running in the 2019 midterm elections.
— CNN Philippines

Get children immunized—Unicef
A United Nations agency has expressed alarm over the measles outbreak across the Philippines.
— Manilastandard.net

Hundreds hired, 2K ex-Hanjin workers apply for BBB jobs
Thousands of applicants got the opportunity to seek their next career, while hundreds were hired on the spot during the second “Build, Build, Build = Jobs, Jobs, Jobs” Caravan held at the Subic Gymnasium, Subic Bay Freeport Zone over the weekend.
— Philippine News Agency

DOH deploys teams to contain measles outbreak in E. Visayas
The Department of Health (DOH) in Eastern Visayas reported on Monday that it has already deployed health teams in some areas to help control the spread of measles as the number of cases is expected to rise in the next few weeks.
— Philippine News Agency

Duterte to Bangsamoro people: Bury your guns, join peace efforts
With the Bangsamoro Organic Law (BOL) now ratified and the Bangsamoro interim government about to be formed, President Rodrigo Duterte appealed to rebels in the region to “bury” their guns and join efforts for peace.
— Rappler

Cut in bank reserves seen this year
The Bangko Sentral ng Pilipinas is expected to reduce the amount of cash banks are required to keep in reserve this year in order to ease the tight liquidity being experienced by the local economy, according to economists of one of the country’s largest financial institution.
— Inquirer.net

Cotabato mayor wants SC to nullify BOL vote
THE legal team of Cotabato City Mayor Cynthia Guiani Sayadi is studying all options in preparation for the filing of a petition before the Supreme Court (SC) to declare the just concluded plebiscites in Mindanao null and void.
— The Manila Times

Amid measles outbreak, DOH says dengue cases also up
From January 1 to 26 this year, the reported cases of dengue reached 12,431 cases. There were only 11,865 dengue cases for the same period in 2018.
— GMA News

SC ready for ‘tele-hearing’ of cases
The Supreme Court will soon implement the new rule allowing high-risk detainees, including arrested terrorists, to stand trial in courts from their detention facilities without the need to go to the courtrooms.
— Manilastandard.net

The ANC Brief: Circus coming to town
The election circus is coming to town. The campaign for the May midterm elections has started. These are the stories ANC will be covering today:
— ABS-CBN News

Philippine bill that will assist startups nears approval
A bill that seeks to support innovative startups in the Philippines is now awaiting the approval of President Rodrigo Duterte for it to become a law following its ratification by the Senate last week.
— KrASIA

A Major Philippine Bank Just Launched Crypto ATMs and it May Fuel Massive Bitcoin Adoption
According to local publications, Union Bank of the Philippines, one of the largest commercial banks in the Philippines, has launched the country’s first crypto ATM.
— CCN

Oversupply brings down prices of eggplant, onions
Around 300 kilos of eggplants from Cabiao, Nueva Ecija are rotting away as market prices fell on Monday due to oversupply of vegetables.
— GMA News

Echiverri scores another victory at Sandiganbayan
Former Caloocan City Mayor Enrico Echiverri has secured another dismissal of his graft case at the Sandiganbayan over the alleged anomalous implementation of infrastructure projects worth P979 million.
— GMA News

Gov’t regulator gives policyholders time to study health plans before buying
The Insurance Commission (IC) has ordered all insurers in the country to give customers five to 15 days as “free-look period” for health insurance products.
— Inquirer.net

ONE Championship: MMA stars campaign to end schools bullying
Bullying has yet again become a hot topic in the Philippines when a viral video on social media, involving a martial arts practitioner made the headlines a few months ago.
— Tempo

Duterte to visit Sagay for land reform program
President Rodrigo Duterte said on Monday he will visit Sagay City in Negros Occidental next week to distribute lands there, months after the fatal shooting of nine sugar farmers that remains unresolved to this day.
— GMA news

D0LE: Kasambahay wage under review
The kasambahays or household service workers rendering services in the cities and in all first class municipalities in Central Visayas are to be paid not less than P3,000 monthly, the existing wage rate pursuant to Wage Order No. ROVII-D.W. 01, which is now under review by the Regional Tripartite Wages and Productivity Board (RTWPB-7).
— Philippine Information Agency

Duterte calls out Sison for trying to justify imposition of “revolutionary taxes”
President Rodrigo Duterte on Monday, Feb. 11, lashed out at Communist Party of the Philippines founder Jose Maria Sison after he rejected the chief executive’s condition for Communists to stop imposing “revolutionary taxes” for peace talks to resume.
— Eagle News

MRT cop doused with ‘taho’ gets medal
The Philippine National Police on Monday lauded an officer who was drenched with a cup of taho by a Chinese woman at the MRT-3.
— ABS-CBN News

DOLE-X launches tree growing project in Camiguin
The Department of Labor and Employment (DOLE)-10-Camiguin Provincial Field Office (CamPFO), in partnership with the Federation of the DOLE Integrated Livelihood and Emergency Employment Program (DILEEP) beneficiaries in Camiguin (FED-Cam) and the Department of …
— Philippine Information Agency