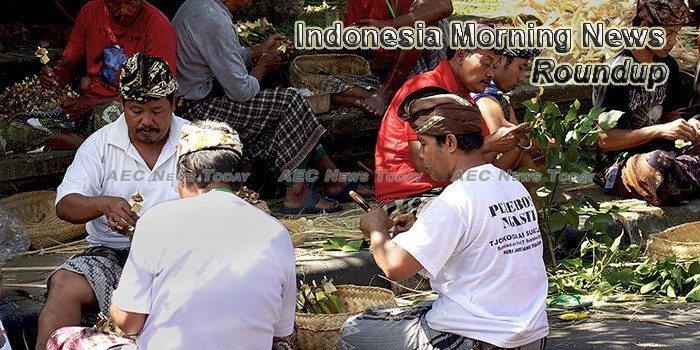 Pilgrimage travel agency under investigation for allegedly losing IDR1 trillion of customers’ money
It seems that there is no end to travel agencies in Indonesia literally robbing customers of their hard-earned money by exploiting their desire to go on the religious journey of a lifetime.
— Coconuts Jakarta

In Indonesia, a shadowy campaign to stoke unrest as elections loom
A spate of mysterious attacks on Islamic clerics, schools and mosques in Indonesia in recent weeks has ramped up tensions as the world’s most populous Muslim-majority country heads into provincial elections and a presidential poll next year.
— Channel NewsAsia

Indonesia central bank holds rates, keeps eye on rupiah
Indonesia’s central bank on Thursday kept its policy rate unchanged, as expected, saying its stance was sufficient to support the economy and pledged to keep the rupiah currency in line with fundamentals.
— The Business Times

Inspection Reveals 80 Percent Of Jakarta’s Construction Projects Unsafe
The Jakarta Manpower and Transmigration Agency has said that the majority of construction projects in the capital city are unsafe.
— Indonesia Expat

Credit Card Skimming in Indonesia: What to Do When Your Bank Account Gets Compromised
In the wake of a series of credit card skimming cases last week, lenders have taken efforts to strengthen their security systems and advise customers to take precautions.
— Jakarta Globe

Palm oil environmental issues stressed amid negative campaign fears
Joining the wave of what the industry has described as a “negative campaign” against palm oil, three documentaries on oil palm plantations have been released and two of them have garnered international recognition.
— The Jakarta Post

Here Is a Simple Guide on How to Submit Your Tax Return, Stress-Free
It is tax season, and 14 million individual taxpayers must fill and submit their tax reports. So far, 6.1 million reports have been filed, and the remaining taxpayers have until Mar. 31 to fulfill their obligation.
— Jakarta Globe

Ministry to use new technology for road repairs
The Public Works and Housing (PUPR) Ministry said it would use a new product of technology a mixture of plastic asphalt and plastic rubber for road maintenance in various regions of the country.
— Antara News

Rupee and rupiah seen vulnerable to U.S. rates, tantrums not expected
Rising U.S. interest rates are considered likely to undermine the high-yielding Indian rupee and Indonesian rupiah, but less this time around than during the U.S. Federal Reserve’s 2013 ‘taper-tantrum’.
— Reuters