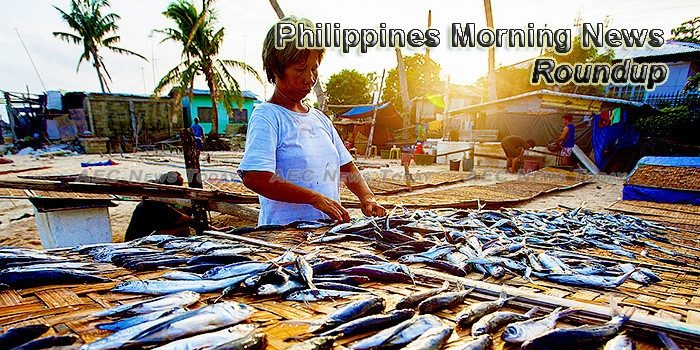 Philippines Eyes $2B Storage Facility For LNG Imports
The Philippines aims to build a $2-billion receiving and distribution facility for imported LNG, as it seeks to replace depleting domestic gas reserves that now produce a fifth of its power, the energy department said.
— Reuters

House plans takeover of casino, lotto licensing
The House of Representatives plans to take over the franchising and licensing functions of state agencies for companies going into casino, lottery, bus and mining operations.
— The Philippines Star

GIR hits 7-month high in May
The Philippines continued to build up its foreign exchange buffer, hitting a seven-month high of $82.07 billion in May due mainly to strong inflows as well as higher price of gold in the international market.
— The Philippines Star

UCPB denies negligence in Provident Plans fund
United Coconut Planters Bank (UCPB) has denied claims its negligence has been a factor which led to the poor financial condition of Provident Plans International Corp., which is now likely to be placed by the Insurance Commission under conservatorship.
— The Philippines Star

Tax reform exempts 6 million from personal income tax
Some six million Filipinos earning P250,000 and below annually would be exempted from paying the personal income tax under the final version of the tax reform bill approved last week by the House of Representatives.
— The Philippines Star

PH coco oil exports surge 73.2% in Jan-April
PHILIPPINE coconut oil exports surged by 73.2 percent in the first four months of the year purely on low base effects, despite the tight supply in raw material and tough competition in the international market, the United Coconut Association of the Philippines (UCAP) said Thursday
— The Manila Times

PH gross foreign reserves hit 7-mth high
The Philippines’ gross international reserves (GIR) hit a seven-month high of $82.06 billion in May with just a slight gain from April, but still fell below the year-earlier level, data released by the Bangko Sentral ng Pilipinas (BSP) on Thursday showed.
— The Manila Times

3 GOCCs remit P4.54B to govt
The government received P4.54 billion in dividends and other forms of remittances from three government-owned and -controlled corporations (GOCCs), the Department of Finance (DoF) said on Thursday.
— The Manila Times

PH drops to 10th place as top host for multinationals
The Philippines remains a promising host country for multinational enterprises (MNEs) for 2017 to 2019, according to a United Nations Conference on Trade and Development (Unctad) report.
— The Manila Times

Death for nine Filipinos over 2013 Malaysia invasion
Nine Filipinos who were part of an armed group that invaded and occupied part of Malaysian Borneo in 2013, in an episode that left scores dead, have been sentenced to hang.
— Malay Mail Online

Top e-commerce sites in the Philippines 2017
With a dynamic economy and a large population proficient with digital technologies, the Philippines is a fast-growing market for e-commerce in Southeast Asia. Several websites and digital applications are already fighting for market share, with global, regional and national players trying to come up to the leader.
— ASEAN UP

Back to basics
Three years ago, in a forum held by the World Economic Forum on East Asia, it was mentioned that the average age of farmers in the Philippines was 57.
— The Manila Times

BFAR eyes stricter measures to regulate eel trade
To prevent the illegal trade of glass eels and increase their commercial value for the Philippines, the Bureau of Fisheries and Aquatic Resources (BFAR) has formulated a plan to strengthen enforcement of regulations.
— The Manila Times

DOST helps upgrade PH rubber industry
A project by the Department of Science and Technology-Forest Products Research and Development Institute (DOST-FPRDI) in Zamboanga Sibugay has provided a boost to the Philippine rubber industry, helping one of the province’s two processing plants produce export-quality rubber.
— The Manila Times

Government continues processing of OFW documents for Qatar
The government continues to process documents of Filipino workers returning to Qatar, as only newly hired applicants who are still in the country will be covered by the temporary deployment moratorium.
— The Philippines Star

More moves for PCN members
The kiln shell was loaded on to a 40 ft out-of-gauge (OOG) flatrack and a 20 ft general purpose container at Slavonski Brod in Croatia, and transported to Kroper, Slovenia for shipping to the Port of Cebu.
— Heavy Lift & Project Forwarding International