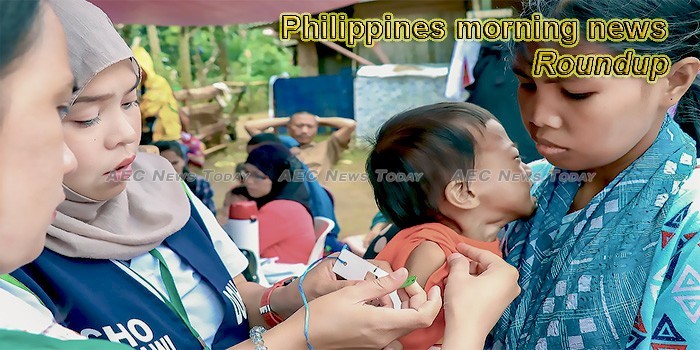 Philippines Alarmed by Roughly 200 Chinese Ships Near Disputed Island
More than 200 Chinese ships have been spotted near the Philippine-occupied Thitu Island in the South China Sea since the start of the year, triggering a diplomatic protest from the Philippines.
— Bloomberg

Measles cuts a deadly path through Asean
Once declared as eradicated from some countries and ‘under control’ in many others, measles is once gain cutting a deadly swathe through the world.
— AEC News Today

Senate, House continue bickering over budget
SENATORS and congressmen are still bickering over last-minute changes made in the proposed P3.757-trillion national budget for 2019 even if the measure has been submitted to Malacañang for President Duterte’s signature.
— Malaya

Committed investments approved by PEZA down as of Feb. in value terms
VALUE of committed investments approved by the Philippine Economic Zone Authority (PEZA) fell in value terms year-on-year in 2019’s first two months despite an increase in number of projects, reflecting what the agency’s head said was cautiousness ahead of the May 13 mid-term legislative and local elections and possible policy changes under the incoming 18th Congress.
— BusinessWorld Online

Maria Ressa posts P126,000 bail for new case
Rappler CEO and executive editor Maria Ressa on Monday, April 1, posted yet another bail of P126,000 (US$2,397) before a Pasig City court in connection with an anti-dummy case that had been split into two.
— Rappler

Marawi, Maguindanao town get P27 million from Japan to construct and repair damaged school buildings
Two schools in Maguindanao and Marawi City got P27 million in combined grant assistance from the Japan government, one set of new school building to bring it nearer to school children, the other one to repair battle-damaged building.
— Business Mirror

DoH-Davao raises alert as dengue cases in the region rises
HEALTH OFFICIALS in the Davao Region have raised the alarm after the number of dengue cases increased in the first quarter of the year, with two deaths reported due to the mosquito-borne disease.
— BusinessWorld Online

Senate made several cuts in proposed 2019 budget – Lacson
Senator Panfilo Lacson on Monday admitted that several budget cuts by the Senate in the 2019 General Appropriations Bill (GAB) had prompted him to disagree with approval and ratification of the measure in Congress.
— Manila Bulletin

Roadmap targets P130-T PH construction industry
The construction industry is projected to contribute P130 trillion to the domestic economy and 7 million skilled workforce by 2030 aided by newly completed roadmap that sets direction for a sustainable growth and development of the industry.
— Manila Bulletin

U.S. kicks off Balikatan exercise in Philippines
Balikatan 2019, an annual military exercise involving thousands of troops — and, for the first time, the F-35B Lightning II stealth fighter — began Monday in the Philippines.
— UPI

Duterte urged to restore ‘BBB’ items in 2019 budget bill
The chairman of the House Committee on Appropriations on Monday urged President Duterte to consider restoring several items in the proposed 2019 P3.757-trillion General Appropriations Act (GAA) that have been removed by the Senate.
— Business Mirror

23 incumbent officials nabbed in CIDG ops
A total of 23 incumbent elective officials were among those arrested by police authorities during the conduct of a one-time-big-time (OTBT) operations aimed at securing the mid-term elections in May.
— Philippine News Agency

Legal issues delay P4.3-billion tax refund of Meralco users
The government will have to forfeit first the unclaimed tax refund of Manila Electric Co. customers amounting to P4.289 billion in favor of the state before it can be used to reduce the power rates, the power retailer said.
— Manilastandard.net

Japanese firm set to invest P392-M in Subic
A Japanese steel company has committed to invest some PHP392.million in this premier freeport for the production of gear parts for industrial robots and specialty steel products for other companies here and abroad.
— Philippine News Agency

Trade hub plans for Tawi-Tawi pushed
Developing Tawi-Tawi’s full potential and taking advantage of its strategic location in the map of maritime business will position the Philippines firmly as an important transshipment hub and open a lot of economic opportunities for the country.
— The Manila Times

Oil companies to roll back pump prices effective on Tuesday
MOTORISTS will get a respite starting on Tuesday as oil companies reduced the prices of petroleum products after last week’s seventh consecutive increase.
— The Manila Times

Energy dep’t issues draft storage rules to support renewables
THE DEPARTMENT of Energy (DoE) has released a draft circular covering the regulation and operation of energy storage systems (ESS) after proponents of the technology raised concerns about the lack of a governing policy framework.
— BusinessWorld Online

DOE closely coordinating with power suppliers as demand goes up
The Department of Energy (DOE) assured the public of continued coordination with power industry players in view of the heightened demand for electricity during the sweltering summer season.
— Philippine News Agency

Lazada’s ‘Shoppertainment’ offer bolsters PHL, Asean sales
ELECTRONIC commerce (e-commerce) giant Lazada has proven effective its pioneering effort to bring entertainment to its trading business as it recorded over 5 million transactions during peak hours in the Philippines, or twice the number of visits to its portal on a normal day.
— Business Mirror

Ex-Quezon City officials get 30 years for 2001 hotel fire
Eighteen years after the fire that took the lives of 74 persons, the Sandiganbayan has sentenced former officials of the Quezon City government and several others to 10 to 30 years in prison for their negligence and failure to perform their duties that led to the August 2001 Manor Hotel blaze.
— The Philippine Star

Chinese envoy says fishing as usual at SCS
Fishing can “go on as usual” in the South China Sea but Chinese and Filipino fishermen must abide by certain limitations, Chinese Ambassador to the Philippines Zhao Jianhua said.
— Tempo

Analyst: China militia near Pag-asa shows prospect to take island
China’s maritime militia around Pag-asa Island (Thitu) in the West Philippine Sea (South China Sea) shows a possibility that the island could be seized with “little difficulty” if China opts to, an analyst has warned.
— Inquirer.net

Cleaner rivers, estuaries seen within 2019 – Cimatu
The Department of Environment and Natural Resources (DENR) is confident that there will be a more noticeable change in the quality of water in the rivers and estuaries leading to Manila Bay within the year.
— Rappler

NPA membership in itself not a crime under law — CHR spox
Whether one is a criminal or not depends on one’s actions, not affiliations, the spokesperson of the Commission on Human Rights (CHR) said in the wake of allegations that the 14 individuals killed by the police in Negros Oriental had communist links.
— GMA News