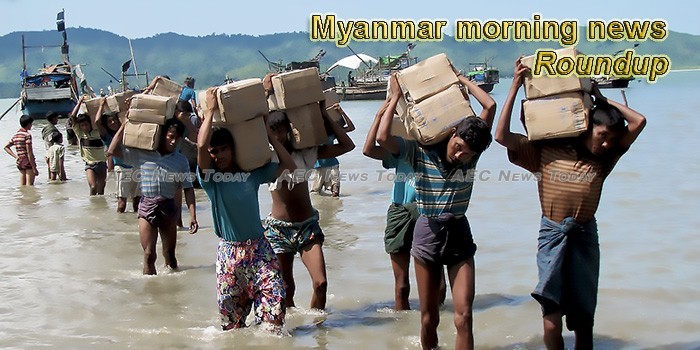 Private capital needed to fund required infrastructure
Unlocking investment from the private sector is necessary for Myanmar to fund its building of transport infrastructure, speakers at a construction sector forum said. Bankability and risk-sharing would be the two key criteria to incentivise businesses to take part.
— Myanmar Times

Myanmar revisits second airport project
Myanmar’s Department of Civil Aviation will conduct a new field study that could revive the Hantharwady International Airport that was slated for Bago.
— TTR Weekly

Risks and responses to Rohingya relocation plan
It is now clear that the Bangladesh government is all set to relocate nearly 100,000 Rohingya refugees to Bhasan Char, a remote island off its coast, starting April 2019.
— The Daily Star

New prospects in Myanmar’s oil and gas blocks
Next month, 15 offshore blocks and 18 onshore blocks will be put up for tender. It is Myanmar’s second international bidding and local and foreign oil firms are interested in participating.
— Myanmar Times

Cardinal from Myanmar: Poverty is a manmade disaster
Poverty is a “manmade disaster” that demands a response on the scale of a “third world war,” Cardinal Charles Maung Bo of Yangon, Myanmar, told a conference on Catholic social teaching.
— NCR Online

France’s ENGIE to assist with Myanmar electrification
ENGIE has teamed up with a Myanmar-focused off-grid energy specialist to help spur rural electrification across the Southeast Asian country with mini-grids combining PV, diesel and battery storage.
— Mizzima

Growth, living standards to rise as Mandalay aims to be second growth engine
Living standards in Mandalay Region are expected to rise this year with per capita GDP rising to K1.7 million compared to K1.5 million in the past, said regional chief minister U Zaw Myint Maung at the Mandalay International Trade Fair and Business Forum held on March 23.
— Myanmar Times

MYSAP ties up with Malaysian company for crab hatchery trial
The Myanmar Sustainable Aquaculture Programme will operate a crab hatchery on a trial basis in April in Labutta Township, Ayeyawady Region, with the help of a Malaysian crab farming company. Through the trial, MYSAP hopes to distribute crab larvae and share technology with breeders.
— Global Newlight of Myanmar

Vashon Rotary supports health work in Myanmar
In January, four islanders who are members of Vashon Rotary traveled to Myanmar to see work the club is supporting through a grant-funded program called Drop of Milk. Vashon Rotary is the lead club for the project, which is working to address maternal and infant health, including improving the high infant mortality rate in the country.
— Vashon Beach Comber

CBM again issues detailed rules to banks
The Central Bank of Myanmar has reiterated its commitments to ensuring stronger enforcement of banking rules and regulations in the country.
— Myanmar Times

Myanmar Authorities Seized Narcotic Drugs In Tanintharyi Region
Myanmar authorities seized over 40 billion kyats ($26.67 million) worth of narcotic drugs at sea in Tanintharyi region, authorities said on Wednesday. The seizure was made on Sunday by security personnel who were conducting patrol at sea near Kawthaung town, reported Xinhua news agency. (IANS)
— Sentinelassam

Campaign finance black holes in Yangon’s election
Campaigning for municipal elections in Yangon has revealed ambiguities around campaign finance that could open the door to corruption.
— Frontier Myanmar

Human Trafficking: Rohingyas faced horrific crimes
A transnational human-trafficking syndicate committed crimes against humanity in Malaysia and Thailand against the Rohingya from 2012 to 2015, the Human Rights Commission of Malaysia (SUHAKAM) and Fortify Rights, a nongovernment rights body, have found in a six-year investigation.
— IPS

The Obstacle to Rohingya Return Is Clear: It’s Still Myanmar.
Rohingya refugees continue to arrive in Bangladesh with stories of continued oppression by Myanmar’s security forces.
— The Diplomat

Harsh Public Criticism for Myanmar Academy Awards
YANGON—Myanmar’s own Oscars, the Myanmar Motion Picture Academy Awards ceremony, was held on Saturday at The One Entertainment Park in Yangon, and proved one of the most controversial events in the local entertainment industry so far this year. Movie lovers have denounced the academy board’s awarding decisions as unfair and biased.
— The irrawaddy

Former Blackwater contractor in Myanmar security venture
A security firm with former US military contractor Mr Erik Prince on its board has moved into Myanmar to provide protection services for international investors, the company told AFP, as it weathers backlash to revelations over planned work in China’s restive Xinjiang region.
— Frontier Myanmar

MRF decides to keep basic price of paddy at K500,000 per 100 baskets
The Myanmar Rice Federation declared on Tuesday that it will purchase paddy at the existing basic rate, which was set last year.
— Global Newlight of Myanmar

Solo anti-war protest in Thibaw
A man held a solo protest in Thibaw, Shan State, on Tuesday to call for help for people affected by the fighting in Shan and Rakhine states and to urge an end to the conflict.
— Myanmar Times

Tourism Industry Figure of the Year – May Myat Mon Win
Daw May Myat Mon Win has worked in the hotel industry for nearly 25 years. She started her career as a secretary at the Summit Parkview hotel, and worked her way up the ranks to become not only the first Myanmar General Manager of Chatrium Hotel, but also the first Myanmar woman to reach this level at any of the country’s five-star hotels. Which is no mean feat!
— Myanmore

Naga Group Leaders Charged with Unlawful Association
Police in Khamti, Sagaing Region on Tuesday charged five leaders of the National Socialist Council of Nagaland-Khaplang with violating Article 17/1 of the Unlawful Association Act. The five were detained by the Myanmar military earlier this month following a January raid on the group’s headquarters in Taga.
— The irrawaddy

Myanmar morning news for May 18