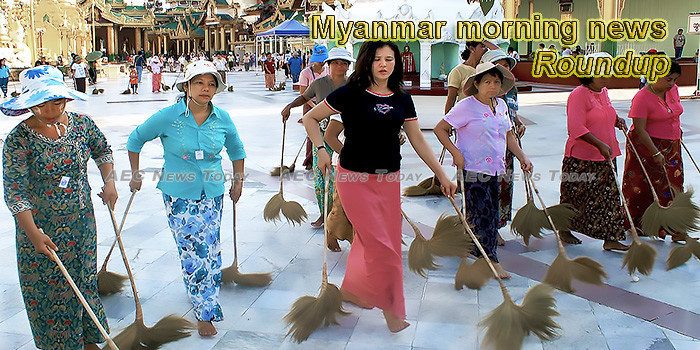 Tax revenue hits over 22 pc of target in December
Until December of 2018-2019 fiscal year, (IRD) Internal Revenue Department’s tax revenue reached over Ks 1369.958 billion, hitting 22.10 per cent of its target, according to its statement on January 16.
— Eleven Myanmar

Myanmar Military Claims to Have Seized Rebel Camp in War-Torn Rakhine State
The Myanmar military said Thursday that it seized an Arakan Army temporary camp in Rakhine state’s Buthidaung township a day earlier, where it found five dead bodies and weapons amid ongoing hostilities with the rebel forces in the region.
— Southeast Asia

Myanmar Has Returned More Than 1,700 Child Soldiers Home to Date, Defense Ministry Official Says
More than 1,700 child soldiers in Myanmar have been reunited with their parents, and about 800 military officers and other army personnel who recruited and used them have been punished, a defense ministry official said Thursday during a workshop in Naypyidaw to discuss the creation of a complaint mechanism to report instances of forced labor.
–Radio Free Asia

Rohingya long for an end to their suffering
Rohingya Muslims, forced to emigrate from their homeland to escape oppression and horrific massacres, cannot escape their painful memories.
— AA

EU tariffs on rice to have limited impact
Restoring EU tariffs on Indica rice imports from Myanmar will have an impact on the production of only 60,000 to 100,000 tonnes of Indica rice, U Lu Maw Myint Maung, joint secretary of Myanmar Rice Federation, said.
— Myanmar Times

Local banks permitted to extend more mortgages
Local banks have been permitted to allocated 5 percent of their total loan portfolio towards mortgages not exceeding three years, the Central Bank of Myanmar (CBM) said in a statement on Tuesday.
— Myanmar Times

Myanmar faces a maze of conflicts on the road to peace
The Myanmar government is eager to crush resistance in conflict-plagued Rakhine State but, as always, is fighting a war on several fronts.
— Crikey

President meets with three pillars of democracy in Kayah State
President U Win Myint attended the meeting with officials from the executive, legislative, and judiciary pillars of Kayah State held in Loikaw Township yesterday morning.
— Global Newlight of Myanmar

Motorbikes are oddly absent from Myanmar’s biggest city
Late at night Klo He Bin likes to don his biking jacket and take to the roads of Yangon on his Yamaha EasyRider.
— Economist

Myanmar suspect escapes from Songkhla police cell
A human-trafficking Myanmar suspect walked free from his cell at a police station in Bang Klam district on Thursday as it was locked only with handcuffs.
— Bangkok Post

Zingo Myanmar raises fund to expand
Ko Shwe Ventures, the Singapore firm behind oral healthcare product Zingo, announced that it had raised US$350,000 of initial seed financing from international investors to launch the product across Myanmar.
— Myanmar Times

Refugee exodus from India to Bangladesh hits 1,300: official
At least 1,300 Rohingya Muslims have crossed into Bangladesh from India since the start of the year, an official said Wednesday, as fears of deportation to Myanmar spark an exodus.
— Mizzima

The case for a holistic water management approach in Myanmar
Myanmar is a rainy country, endowed with a wealth of rivers, streams and bodies of water. And while average annual rainfall in the Dry Zone is less than 1,000 millimeters, coastal regions can receive over 5,000 millimeters of rain over the same period. In other words, Myanmar on the whole is blessed with rich resources of freshwater, with a vast majority of this water flowing into four major rivers, the Chindwin, Ayeyarwady, Sittang and Salween and their associated tributaries.
— Mizzima

Fraudster arrested for deceiving Myanmar workers into getting jobs in Thailand
The broker who obtained money from 22 Myanmar workers arriving in Thailand by tricking them into getting jobs have been arrested and the cash has been seized from him, according to a statement released by Myanmar Overseas Employment Agencies Federation (MOEAF) based in Bangkok.
— Eleven Myanmar