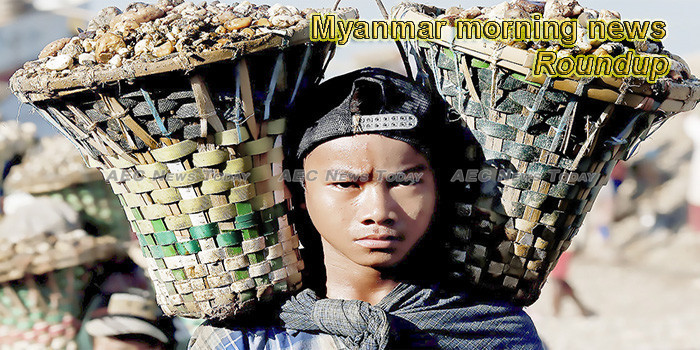 Fishery export earns over $564 mln during Oct-May period
Export earnings from fishery sector from 1 October, 2018 to 31 May, 2019 in current FY amounted to about US$564.35 million, which is an increase of $39.5 million compared to that of last FY, according to the statistics released by the Commerce Ministry.
— The Global New Light of Myanmar

Imports of CMP raw materials increase by over 270 million USD
From October 1 to May 31 of 2018-2019 fiscal year, the raw materials imported by CMP industries has reached 1.573 billion US dollars, up 273.828 million USD compared with the same period last year, according to the figures from the Commerce Ministry.
— Eleven Myanmar

WB warns Myanmar of urbanisation challenges
With more people moving to Yangon and other key destinations for better opportunities, the World Bank has warned of the challenges related to urbanisation in Myanmar at the launch of its latest report this week.
— Eleven Myanmar

Promote business opportunities through bilateral relations with Europe
The State Counsellor concluded her working visits to the Czech Republic and Hungary recently, in which she sought to boost relations with the two European countries. Myanmar only recently opened up to the rest of the world.
— The Global New Light of Myanmar

Myanmar’s Suu Kyi is turning far-right
That is, fear for my Muslim friends back home in Mandalay in particular and Myanmar’s Muslims in general, including the systematically persecuted Rohingya.
— Yenisafak

Inclusive Urbanization – Answer to Address Inequalities
The World Bank report on ‘Myanmar’s Urbanization’ released in Yangon on 6 June provides a framework and set of recommendations for an inclusive urban development that creates opportunities for all and secures peace and prosperity.
— Mizzima

Myanmar unwilling to take Rohingya back, Bangladesh says
Bangladesh’s Prime Minister Sheikh Hasina on Sunday said Myanmar is unwilling to take back hundreds of thousands of Rohingya Muslims who fled a persecution in the Buddhist-majority country in 2017.
— Daily Sabah

Agri-loans available to rice farmers
With the monsoon rain season in Myanmar, the Agricultural Development Bank has begun disbursing agricultural loans to rice farmers nationwide through its bank branches.
— The Global New Light of Myanmar

Wirathu Arrest Warrant Could Help Muslims In Myanmar
Ashin Wirathu, a leading monk in the ongoing persecution of Muslims in Rakhine State, was this week issued an arrest warrant by a Myanmar court, on the basis of “exciting or attempting to excite disaffection towards the government.”
— The owp

Up-and-coming Korean SMEs entrepreneurs we need to welcome
By Maung Thitsar (Yankin) Occupying the southern 14 percent of the Korean Peninsula in East Asia, the Republic of Korea (ROK), also known as South Korea, possesses the 4th largest economy in Asia and the 11th largest in the world, touching the border lines with China, Russia and Japan.
— The Global New Light of Myanmar

Myanmar faces the risks of climate change impacts caused by deforestation
Myanmar is facing the risks of climate change impacts as the country’s annual deforestation rate between 2010 and 2015 reached 1.72 per cent, said Ohn Win, Union Minister for Natural Resources and Environmental Conservation at a workshop on the suggestion on the analytical results of the village firewood plantation law and bylaw, at Tungapuri Hotel in Nay Pyi Taw on June 7.
— Eleven Myanmar

Development tasks gaining momentum in Taninthayi Region
A sea-crossing bridge connecting Kawthoung Township, Taninthayi Region with an island village named Pulone Toneton Village is being built by the Bridge Construction Group – 4 under the Ministry of Construction. Pulone Tonelon Village, located on an island in the Andaman Sea, consists of more than.
— The Global New Light of Myanmar

Will Malaysia finally address the human trafficking of Rohingya?
IN A FEW WEEKS, Thailand and Malaysia will again be ranked in the US Trafficking in Persons Report (TIP report) for their efforts in combating human trafficking. Many government’s rightly go to great lengths to avoid the lowest ranking – Tier 3 – as it can invite sanctions and have other punitive ripple effects, such as discouraging foreign investment.
— The Star Online

Signing ICCPR is a step towards building democracy with human dignity
Myanmar plans on signing the International Covenant on Civil and Political Rights-ICCPR. We have not yet signed the ICCPR, but we are already fulfilling those rights included in the covenant. Our willingness to sign the ICCPR reflects our commitment to promoting human rights in our country.
— The Global New Light of Myanmar

Govt block on aid to thousands of IDPs enters fourth year
The government has not permitted United Nations agencies to deliver aid to thousands of displaced persons in non-government areas of Kachin and Shan states since June 2016, the UN Office for the Coordination of Humanitarian Affairs has revealed.
— Frontier Myanmar

BPI and its new plant Inyaung
About 2 miles 5 furlong west of Hanmyintmo in central Myanmar’s Mandalay Region Kyaukse Township is Inyaung Village. Near the village is Myanmar Pharmaceutical Industry’s newest plant Inyaung. The new plant is situated on 31.57 acres of land.
— The Global New Light of Myanmar

State Counsellor arrives back in Nay Pyi Taw
State Counsellor Daw Aung San Suu Kyi who was in Hungary on a working visit left Budapest, Hungary for Nay Pyi Taw by air on 7 June at 11:45 a.m. local time. The State Counsellor and party were seen off by Hungarian State Secretary for the Ministry of Foreign Affairs and Trade Dr. Csaba Balogh,
— The Global New Light of Myanmar

Myanmar Evening Tour Promotion held in Seoul
Myanmar Tourism Federation organized Myanmar evening Tour Promotion, with the support of Ministry of Hotels and Tourism and in collaboration with Korean Embassy, at Coex Hotel in Seoul in the evening of June 8th .
— The Global New Light of Myanmar

How to embrace mental wellness in startup culture
In a world of heightened stress and anxiety, make sure you’re creating a healthy work environment where everyone can thrive The state of the world has been extremely turbulent, with people experiencing fires, war, earthquakes and other tragedies, in addition to an increasingly competitive working.
— e27