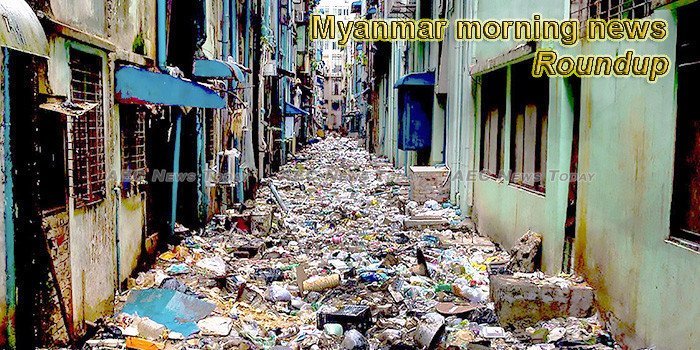 Myanmar to Send Envoys to Rohingya Camps in Bangladesh
Myanmar is sending a high-level delegation soon to camps in Bangladesh to attempt to convince hundreds of thousands of Rohingya Muslims they can return home, Myanmar’s U.N. ambassador said Monday.
— The Globe post

A Digital Nation for the Stateless Rohingya?
A team of Rohingya Muslims is using blockchain technology to forge digital identities for the persecuted minority’s diaspora.
— The Diplomat

Work on foundation of Yangon-Dala bridge begins
Drilling work for installing bored piles on the Dala side of the Yangon-Dala bridge across the Yangon River was started on 28 June. The bridge is expected to be completed by December, 2022, according to the Bridge Department under the Ministry of Construction.
— The Global New Light of Myanmar

Karen refugees return to Myanmar
A total of 151 Karen refugees from 39 families were returned voluntarily to Myanmar from their camp in Umphang district of Tak on Monday morning.
— Bangkok Post

Kargo cuts out middleman to simplify goods transport
Kargo, a Yangon-based start-up founded by Australian Alexander Wicks in September 2016, is out to simplify a fragmented transport and logistics market and an opaque pricing structure for transporting goods in Myanmar.
— Myanmar Times

Myanmar: Current Developments – Analysis
The unilateral cease fire ordered by the Army ends Sunday and there is as yet no sign whether the ceasefire will be further extended by the Army.
— Eurasiareview

Aid denied to Myanmar displaced
An armed policeman stands in front of a house with a sign reading ‘Will take part in census only with the name Rohingya’ at the Thel Chaung Muslim majority village during a census taking near Sittwe, Rakhine State, western Myanmar, April 1, 2014. (Photo by EPA/LYNN BO BO)
— La croix

Digital literacy training for Yangon teachers
Just over 10 years-ago Myanmar had some of the lowest rates of mobile phone ownership in the world. This was not surprising, given that a mobile phone license could cost the average person US$20000. The country was quite disconnected, in terms of media and technology usage.
— Myanmar Times

Myanmar university delegation joins football festival in France
A student from Hpa-an University left Yangon on Saturday for Lyon, France, to join the Streetfootballworld Festival 2019 on July 2, according to a statement from French embassy in Yangon. The head of the delegation Thaint Myat Noe is a youth leader for “Football for Good” sport for social change programme called Football United, a joint initiative by the Myanmar Red Cross Society and Australia’s University of New South Wales, operating since 2013.
— Myanmar Times

NDAA Chief Vows ‘Eternal Peace’ at 30th Anniversary Event
State Counselor urges Mong La group to join NCA as it commemorates three decades since its formation and the signing of a truce with the government.
— Irrawaddy

Union Govt Rehashes Kayah State Playbook in Mon State Dispute
Refusing to learn the lessons of past mistakes, the NLD’s backing of Gen. Aung San statues in ethnic states will hurt them in 2020 elections.
— Irrawaddy

Military Extends Ceasefire by 2 Months, Rakhine Still Excluded
The military says the move aims to foster constructive peace talks with ethnic armed groups that have not yet signed the NCA.
— Irrawaddy

Tatmadaw Commander-in-Chief’s Office urges effective peace building works during ceasefire period
Tatmadaw Commander-in-Chief’s Office issued an appeal yesterday to conduct effective peace building works during the ceasefire period. The appeal issued stated that any organization or person should demand their wishes according to democratic methods when establishing a modern developed democratic nation desired by the entire.
— The Global New Light of Myanmar

How Myanmar is smuggling gold into India
When militant outfits in the northeast started laying down arms five-six years ago, the parallel economy that depended on them took a hit. Arms smuggling had been big across the India-Myanmar border. The routes were in place. So were the networks of carriers. All that was needed was a new product. So a switch was made – from AK-47s to gold.
— Economic Times

Hong Kong Braces for Annual Handover Rally as Fresh Protests Erupt
Organizers of recent protests are confident that anger over the government’s failure to withdraw an extradition bill will boost numbers at Monday’s rally.
— Irrawaddy

Weight Loss Explained
Weight Loss Explained If you aren’t losing weight, there’s a rather high possibility that you’re not in a calorie deficit. At the start of your weight-loss process, you might find it beneficial to share your goals with friends and family who may be prepared to assist. A lot of people don’t exercise since …
— The Global New Light of Myanmar

The Insider Secrets for Hello World
The Insider Secrets for Hello World You will carry on to let it operate since you stop by this next report. Nothing might have assisted them longer. Yes, in the event that you should be doing Math. If you should be capable of going into the candidate name in the writing box and vote and …
— The Global New Light of Myanmar

Nearly Half a Million People Urge Indian Government to Declare a ‘Climate Emergency’
Two signature petitions have seen over 450,000 Indians calling for their government to take climate change at home more seriously.
— Irrawaddy