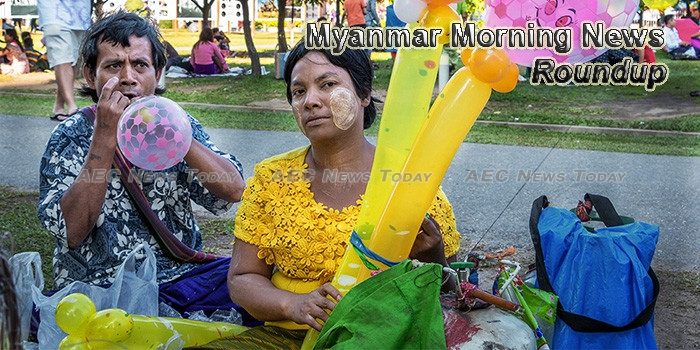 Heineken upbeat on future of Myanmar brewery
THOUGH Myanmar’s beer consumption is low at 6 litres per capita on a yearly basis, Heineken Myanmar sees it as a good opportunity for its expansion in Myanmar, according to managing director Rene Sanchez Valle.
— The Nation

Myanmar blames Bangladesh for delaying accord on repatriating Rohingya
Myanmar insisted on Wednesday it was ready to set up a repatriation process for Rohingya Muslims even as more risked their lives fleeing the country, but it voiced fears Bangladesh was delaying an accord to first get international aid money.
— Reuters

Thailand ready to share sufficiency economy experiences with Myanmar
Foreign Minister Don Pramudwinai was in Myanmar on Oct 29-30 for an official visit during which he had a meeting with State Counsellor Daw Aung San Suu Kyi and Senior General Min Aung Hlaing, commander-in-chief of the armed forces of Myanmar.
— Thai PBS

UN Assistant High Commissioner calls for humanitarian access and safe, voluntary repatriation of refugees during Myanmar visit
The United Nations Assistant High Commissioner (Protection), Mr. Volker Türk, concluded on Wednesday a two-day visit to Myanmar, during which he called for unrestricted humanitarian access for communities in need, and for the voluntary return of refugees in safety and dignity.
— ReliefWeb

MoU signed in Rakhine for mega projects
With the aim of implementing three mega projects for regional development in Rakhine State, a memorandum of understanding (MoU) has been signed between the Rakhine State Government Committee and private companies on October 30.
— Eleven Myanmar

Myanmar mine-laying is adding to the horror of Rohingya exodus
An international human rights group has called on Myanmar to stop using landmines that are killing and maiming Rohingya refugees as they continue to flee violence in Rakhine state.
— The Nation

Bangladesh/Myanmar: Rakhine Conflict 2017 – WHO Situation Report: 10, 27 October 2017
As of 26 October 2017, cumulative number of new arrivals in all sites of Ukiah, Teknaf, Cox’s Bazar and Ramu are 605,000, including over 326 000 arrivals in Kutupalong Balukhali Expansion site, 233 000 in Tekhnaf makeshift settlements/refugee camps, 46 000 arrivals in host communities and 175 000 arrivals in new spontaneous sites.
— ReliefWeb

Universities pressured to cut Myanmar ties over Rohingya crisis
Universities across the world are under increasing pressure to break ties with institutions in Myanmar in the wake of the country’s military crackdown on Rohingya Muslims.
— Times Higher Education

Myanmar struggles to fight the crimes of illegal logging
It has been a good year for U Tint Khaing, the assistant director of the Forest Department overseeing action in Yangon. His team seized an estimated 1,500 tons of illegal timber this year alone. They claim that it’s the largest amount of timber the Forestry Department has ever seized from Yangon.
— Mongabay

Muslim countries push UN to speak out on Myanmar abuses
Muslim countries led by Saudi Arabia want the United Nations to denounce serious rights abuses in Myanmar and demand an end to the military campaign against the Rohingya, according to a draft resolution seen by AFP on Wednesday.
— Free Malaysia Today

UN names new coordinator for Myanmar
The United Nations on Tuesday named a new interim relief coordinator in Myanmar as the government continues to block demands that humanitarian workers be allowed to reach Muslim Rohingya in Rakhine state.
— Mizzima

Is Facebook responsible for Myanmar’s anti-Rohingya violence?
In the past year, a single company has come to be understood as powerful enough to facilitate Russian interference in an American presidential election, ensure the integrity of Germany’s parliamentary election, and potentially cripple opposition to Cambodia’s authoritarian leader.
— Coconuts Yangon