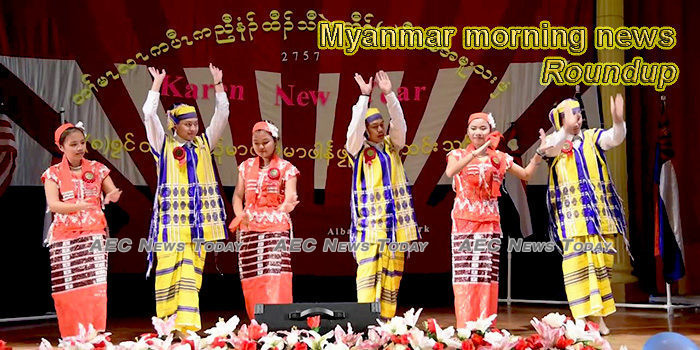 Protesters Call for Action Against Police for Revealing Toddler Rape Victim’s Identity
Hundreds of people marched in Yangon to demand legal action against police officers who revealed the identity of the toddler victim in the ‘Victoria’ rape case.
— Irrawaddy

Ships ahoy for Myanmar’s new blue-water navy
As Myanmar’s navy takes possession of its first submarine and its largest surface warship in back-to-back big-ticket acquisitions, the close of 2019 marks a striking watershed in the emergence of the Southeast Asian nation as a seriously engaged player in the strategically shifting currents of the Bay of Bengal.
— Asia times

Food Shortages in Two Rakhine Villages as Myanmar’s Military Seizes Only Bridge in or Out
A blockade by Myanmar’s military is causing food shortages for 500 people living in two sealed-off villages as fighting rages on in the country’s western Rakhine state.
— Radio Free News

IMF sees stable growth but risks lie ahead for Myanmar
Myanmar’s economy is growing steadily but held back by uncertainty ahead of next year’s general elections and weaker private demand, according to the International Monetary Fund.
— Myanmar Times

Myanmar’s Second Political Women’s Group Was Established 100 Years Ago Today
On this day 100 years ago, the Darna Thukha, an organization led by women to fight British colonial rule in Burma, also known as the Wunthanu Kumari Association, was established.
— Irrawaddy

Card. Bo urges understanding of Myanmar’s struggle for democracy
Cardinal Charles Bo of Yangon has issued a Christmas message urging for understanding from the international community. He is also calling on his fellow citizens to work for peace and reconciliation, saying “peace is possible, peace is the only way”.
— Vatican News

Myanmar Air Force Capabilities in the Headlines with Anniversary Celebration
This year’s iteration of the annual event spotlighted developments within the country’s ongoing effort to develop its military capabilities.
— The Diplomat

Landmine Use Must Be Stopped in Myanmar’s Armed Conflict
It was painful to hear that Daw Aye Ngwe, mother of three children, was injured in the leg last week when a landmine exploded in her tea plantation in Namhsan Township, northern Shan State.
— Reliefweb

Gov’t promises assistance to declining print media: MPC Chair
The government has promised that the private print media should not seek overseas assistance despite the decline and that it will provide necessary assistance to them, said U Ohn Kyaing, Chair of Myanmar Press Council, at a discussion on the sustainable development of print media, at the MPC office in Yangon, on December 22.
— Eleven Myanmar

Over 100 hospitalised for food poisoning in Ayeyawady
Over 100 people in Oakshitkalay village, Ngapudaw Township, Ayeyawady Region, were hospitalized from an outbreak of food poisoning on Sunday night.
— Eleven Myanmar

Myanmar vessel with banned drug seized
The Coast Guard has seized a vessel carrying more than 300 kg of a banned drug worth millions of dollars in the international market.
— Tribune India

Myanmar Police Seize Nearly 40 Million Kyats in Counterfeit Bills in Mandalay
Police in Mandalay have arrested five people found in possession of nearly 40 million kyats in fake bills and opened a case against them for counterfeiting currency.
— Irrawaddy

Yangon-Bagan special train to run during X’mas holidays
By Nyein Nyein The Myanma Railways (MR) will operate a special train between Yangon and Bagan during the Christmas holidays, according to the No.7 Division of MR.
— The Global New Light of Myanmar

Sourcing vulnerable women from the Kachin and Shan states
Forget the heady and romantic dream that marriage may conjure up. It is impossible not to feel sorry when the heart-breaking stories of young women who became victims of bride trafficking were revealed publicly by Human Rights Watch (HRW) in March and in The New York Times in August 2019, drawing attention to these human and gender rights violations going on in Myanmar’s Kachin and Shan states in relation to China.
— Mizzima

Downtown Yangon to get national library in 2020
By Maung Hlaing (Sarpay Beikman) Good news must be shared. Grandpa said so while I was in my childhood.
— The Global New Light of Myanmar

The Day Imperial Japanese Bombers Rained Fire on Yangon
On this day in 1941, about 3,000 Yangon residents were killed as Japanese aircraft unleashed the first-ever bombing raid on the city.
— Irrawaddy