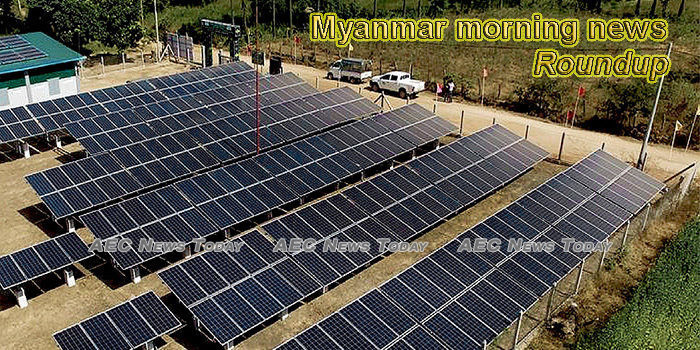 Myanmar to issue up to 10 foreign bank licences
The Central Bank of Myanmar (CBM) has kicked off a process to allow foreign banks to start retail operations in the country from 2021.
— Vantageasia

Myanmar Has Blazed a Path to Democracy Without Rights
The paradox at the heart of the Rohingya genocide has always been Myanmar’s leader Aung San Suu Kyi.
— Foreign Policy

Singapore investors explore opportunities in Myanmar construction
Over the years, the Myanmar government has stepped up its efforts to bring in foreign direct investment (FDI) to the country. Being more pro-business and open to FDI, potential opportunities for foreign companies willing to invest in Myanmar are vast, particularly in the construction industry as one of the main pillars of the economy.
— Myanmar Times

China views Myanmar as a gateway to the Indian Ocean, but concerns remain
With Chinese President Xi Jinping poised to visit Myanmar this week, questions surround what will be discussed in the closed-door sessions with Myanmar State Counsellor Aung San Suu Kyi and the Military chief Senior General Min Aung Hlaing, given the importance of the country for Beijing’s strategic outreach.
— BNI Online

Myanmar buys 10 new train carriages from S.Korea
10 new air-conditioned train carriages bought from South Korea will be up and running on the Mandalay-Myinkyina rail road in early March, according to the Ministry of Transport and Communications.
— The Star Online

Conflicts in Myanmar a challenge for businesses, says World Bank
Myanmar is expected to grow at a rate of 6.4 percent in fiscal 2019-20 from as a result of higher government spending and private investments but a rising occurrence of conflict and violence could hold investors back, according to the World Bank’s Myanmar Economic Monitor report, released Tuesday.
— Myanmar Times

What Xi wants in Myanmar may not be what he gets
If there were any doubts around China’s thinking about where to direct its money and influence in Southeast Asia, they were dispelled by the recent announcement that Xi Jinping would visit Myanmar on 17 and 18 January, the first state visit by a Chinese leader to its southern neighbour in 19 years.
— Lowy Institute

China leaves rivals in the dust with influence in Myanmar
Taiwan’s presidential election on January 11 made Chinese foreign policy look messier than it actually is. Tsai Ing-wen won a handsome victory on a wave of umbrage against China’s habit of pushing its smaller neighbors around. Her landslide suggested missteps and overreach by President Xi Jinping too.
— Nikkei Asian Review

Will India miss chance offered by Myanmar?
As China and Myanmar deepen relations, many Westerners believe that India’s strategic room in the Indian Ocean region would be squeezed. New Delhi has a similar standpoint, thinking it should strengthen cooperation with countries in the vicinity so as to neutralize the increasing strategic presence of China in the region.
— Global Times

Ports, trains and trade: Xi to offer Myanmar billion-dollar bounty
A high-speed rail line to the east, a deep-sea port to the west, and a makeover for commercial heart Yangon — Chinese leader Xi Jinping arrives in Myanmar on Friday laden with investment pledges worth billions which could reshape the country.
— Mizzima

Reform of Myanmar Human Rights Commission Lacks Transparency, Critics Say
The Myanmar government replaced its entire National Human Rights Commission (MNHRC) on Tuesday, replacing all previous members with new commissioners. But according to some observers, the re-formation comes without any changes to relevant legislation or transparency in the selection process.
— Irrawaddy

Myanmar Homeowners Arrested After Chinese Migrant Border Raid in Myawaddy
Four Myawaddy homeowners face prosecution after a raid found they were sheltering Chinese citizens amid complaints of an influx of unruly migrants.
— Irrawaddy

Japan backs Myanmar over genocide charges
The western camp finds itself divided over the Myanmar controversy. After India, Japan also maintains that there has been no genocide of the Rohingya people, but rather a counter-terrorist crackdown on the “Arakan Rohingya Salvation Army,” also known by its former name Harakah al-Yaqin, or “Faith Movement.”
— Voltairenet

State-owned steel mill seeks investors
The Ministry of Planning, Finance, and Industry is seeking expressions of interest from both domestic and foreign investors interested in participating in the recommissioning of the Myingyan Steel Mill.
— Myanmar Times

ActionAid to help spur seed production in several areas
The Agriculture, Livestock and Irrigation Ministry has linked up with ActionAid Myanmar to carry out seed production and help businesses in central plain tropical zone and Ayeyarwady Deltaadapt and ensure climate change.
— Myanmar Times

Xi Jinping Calls for ‘Concrete Planning and Implementation’ of Chinese Projects Ahead of Myanmar Visit
Chinese President Xi Jinping wrote in an op-ed in Myanmar’s state-owned newspapers that it’s time to move ahead on mutually beneficial development projects in Myanmar.
— Irrawaddy

Myanmar Court Set to Issue Warrant for US Man Who Failed to Attend Court in Cannabis Case
A Mandalay court is preparing an arrest warrant and to take the bail money for a US man accused of running a cannabis plantation, although he allegedly had a permit.
— Irrawaddy

Fresh, Affordable and Just a Little Spicy: Jana Mon Serves up Myanmar’s Mon Cuisine in Yangon
Myanmar and foreign residents of Yangon are discovering the authentic flavors on offer at Jana Mon, an excellent Mon cuisine restaurant hidden away near Shwedagon Pagoda.
— Irrawaddy

Chinese actress donates to orphanage in Mingaladon
Qiao Xin, the main actress of the Chinese drama series ‘Ode to Joy’, and crew made donations to the Andrew Youth Orphanage in Gontalapaung Village, Mingaladon Township, yesterday morning.
— The Global New Light of Myanmar