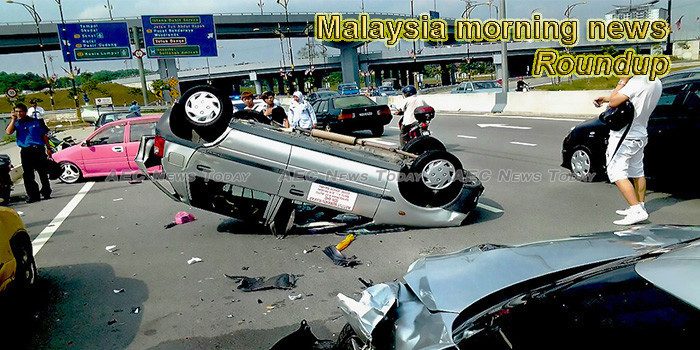 #DestinationGOOD: AirAsia helping refugees in search of home (HD video)
Often seen as “people with no choice and no voice”, refugees have been granted some valuable airtime in a new video production from low-cost regional carrier AirAsia.
–– AEC News Today (video)

Malaysia’s first ever robotics centre of excellence to set up in excellence
According to recent report, the Advanced Technologies Innovative Alliance Sdn Bhd (ATIA) will be collaborating with three local companies to set up the first Centre of Excellence For Robotics in Malaysia, which will be based in Cyberjaya.
— Opengov Asia

Malaysian developer launches KYC compliant blockchain
According to a recent report, a Kuala Lumpur-based group has launched a blockchain service that aims to help businesses cut time and cost involved in carrying out Know Your Customer (KYC) processes.
— Opengov Asia

Give Mahathir space to lead Malaysia as interim prime minister: Anwar
Parti Keadilan Rakyat (PKR) president Anwar Ibrahim said on Wednesday (Jan 2) that Malaysian Prime Minister Mahathir Mohamad must be given the space to lead the government for the duration that had been agreed upon.
— Channel NewsAsia

Labour supply to Malaysia yet to resume despite bilateral pact
Though it has been more than two months that Nepal inked the labour agreement with Malaysia, the outflow of Nepali migrant workers to the Southeast Asian nation is still uncertain.
— Himalayan Times

Dr M: Malaysia may resume ECRL project, but on smaller scale
The East Coast Rail Link (ECRL) project, which was suspended last July, could resume on a smaller scale if China agrees to the move, Prime Minister Tun Dr Mahathir Mohamad was reported by Malaysian media as saying.
— The Star Online

Nestlé Malaysia doubles sales on e-commerce space
Nestlé (Malaysia) Bhd said its sales have doubled on Shopee Malaysia e-commerce space within a year of its partnership with the online marketplace.
— The Edge Markets

Why TAR UC should still receive government funding
I read with sadness that this year, Tunku Abdul Rahman University College (TAR UC) will not be getting some of the financial assistance it received over the past 50 years.
— FMT

iflix sells off Africa business to refocus on Malaysia and Indonesia
Online content streaming site iflix has let go of its stake in the Africa market, selling its business to Econet Global.
— Marketing Interactive

Malaysia is a Leader in Islamic Finance, But Why Not Islamic Fintech?
Malaysia was named a leader in Islamic finance, producing 26% of the world’s Shariah-compliant financial assets by the end of 2017—amounting to US$528.7 billion (RM2.05 trillion). The study proclaimed Asia as the largest market for both sukuk and Islamic funds.
— Fintech

How This Leading Telecom Firm From Malaysia Is Embarking On AI Journey
Maxis is a leading communications provider in Malaysia for mobile, home and business needs on 4G and fibre, and providing easy ways to own the latest smartphones.
— Analytics India Mag