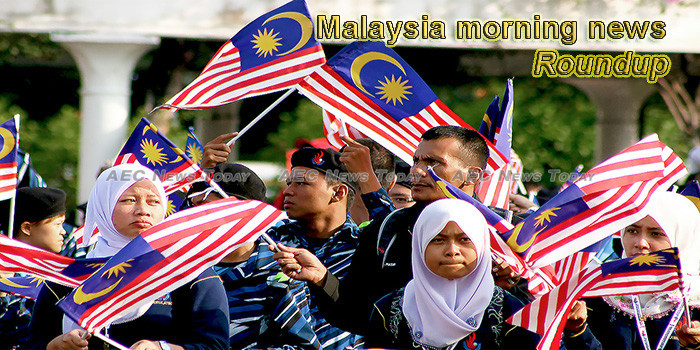 Malaysia hopes to pay for military equipment with palm oil, says minister
Malaysia is in talks with at last six countries on the possibility of using palm oil to pay for arms, as South-east Asia’s third-biggest economy seeks to replace old equipment to boost its defence capabilities.
— Malay Mail

519 arrested for terrorism activities as of July: Malaysian home minister
As of July, the Malaysian police have arrested 519 people suspected of having been involved in terrorism, said Home Minister Muhyiddin Yassin on Monday (Aug 26).
— CNA

CSC Steel posts 21.2% jump in net profit for Q2
CSC Steel Holdings Bhd registered a net profit of RM12.6 million for the second quarter ended June 30, 2019, a 21.2% rise from RM10.40 million recorded in the corresponding period of the previous year, attributed to slight increase in margins for coated steel products as well as lower marketing and administrative expenses.
— The Sun Daily

MACC investigates plotting and monopoly in govt’s project bid
The Malaysian Anti-Corruption Commission (MACC) will investigate those who plot and monopolise the bidding for government projects.
— The Sun Daily

Third-phase payments of BSH 2019 to start on Wednesday
The third phase of the 2019 Cost-of-Living Aid (BSH) payments will be credited directly into the eligible recipients’ bank accounts starting Wednesday (Aug 28).
— The Sun Daily

UOA Development’s Q2 profit up 6% to RM125.09m
UOA Development Bhd reported a 6% increase in net profit to RM125.09 million for the second quarter ended June 30, 2019 compared with RM118.03 million in the same quarter of the previous year, due to progressive recognition from ongoing development projects and sales of completed offices and residential units.
— The Sun Daily

Don’t treat Lynas like an outcast: Mahathir
Lynas Malaysia Sdn Bhd, the rare earths mining company, should not be treated like an outcast as it brings big investment and jobs, said Prime Minister Tun Dr Mahathir Mohamad.
— The Sun Daily

MOE will study use of toys to encourage mental stimulation among children
The Ministry of Education (MOE) will study the use of toys that can sharpen the minds of children in the early stages of education to produce a creative and innovative generation.
— The Sun Daily

Gobind calls for more Finas dialogues with film industry groups
Communications and Multimedia Minister Gobind Singh Deo today advised the National Film Development Corporation (Finas) to hold more dialogues with specific groups involved in the film industry in the country to find out the problems they may be facing.
— The Sun Daily

AAX expected to remain in the red in Q3
Analysts have ‘sell’ calls for AirAsia X Bhd (AAX) following its disappointing results in the second quarter (Q2), with Q3 expected to be another loss-making quarter for the carrier.
— The Sun Daily

Entrepreneurship grants only for truly qualified: Mohd Redzuan
The government, through the Ministry of Entrepreneur Development, continues to give grants to Bumiputra entrepreneurs, but the assistance would only be given to those in the target group who are truly qualified.
— The Sun Daily

Situation in KLIA under control despite non-functional FIDS at Departure Hall
The situation at the KL International Airport (KLIA) was under control on Monday (Aug 26) morning even though the Flight Information Display System (FIDS) at the Departure Hall was not functioning.
— The Star Online

Global delegates expected at STB-hosted dinner
Over 1,000 delegates from around the globe are expected at a welcoming dinner of the World Tourism Conference (WTC) 2019 hosted by Sarawak Tourism Board (STB).
— New Sarawak Tribune

MyCar clarifies: Go-Jek issue not racially or politically motivated
Go-Jek and other motorcycle ride-hailing services could be available in Malaysia soon after the Cabinet approved the proposal in principle, but reports have shown that not everyone is on board with the recent decision.
— Malay Mail

5 shows to catch at DiverseCity: Kuala Lumpur International Arts Festival 2019
A tragic love story set in a “paddy field” right at the heart of the city, a symphonic marriage between Chinese drums and Malay/Balinese gamelan in a percussion concert, a multidisciplinary concert piece conceptualised and brought to life by Lan e Tuyang, a group of cross generational practitioners from the Kenyah and Kayan community in.
— Star2.com

NGO wants cops to investigate alleged ‘kaotim’ involving state exco member
A non-governmental organisation (NGO) has urged the police to investigate an audio clip alleging that an assistant to a Perak executive council member tried to kaotim or settle a case with a police officer.
— The Star Online

PH is strong and united, says Mahathir
The Pakatan Harapan (PH) government is united and is not losing support, said Prime Minister Tun Dr Mahathir Mohamad.He said the Cabinet has stayed together for over a year and has been able to make hard decisions on critical issues.
— The Sun Daily

Faster issuance of licence, land for investors
The State Government is committed to expedite the issuance of licences down to two months or less to lure investors into Sabah, said Assistant Minister of Trade and Industries Ben Chong.
— The Borneo Post

Dego Ride okay with riders doing food deliveries with other apps
Dego Ride is open to its riders working for other e-hailing platforms to deliver food, its founder said.
— Malay Mail

Group to push for clean rivers, water sources
There is a need for people and the government to come together and make serious efforts to clean up our rivers and water sources.
— The Sun Daily