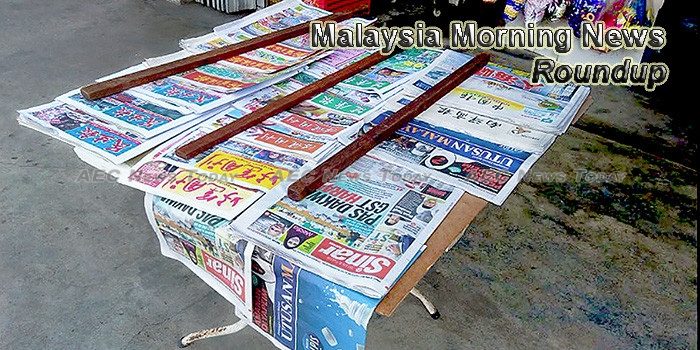 Johor attributes federal govt’s support to surging foreign direct investments
The federal government’s support was one of the factors that has enhanced Johor’s position as a choice destination for foreign direct investment (FDI) besides joint initiatives between federal and state governments, the Johor State Assembly was told today.
— Malay Mail Online

Foreign buying still robust despite pullback in April
Foreign investors pulled back from the Malaysian stock market in April 2017, with total foreign purchases of Malaysian equities dropping 32.3% to RM10.9 billion from RM16.1 billion the previous month.
— The Edge Markets

Rhone Ma sees positive returns from 2Q onwards
It’s been close to five months since Rhone Ma Holdings Bhd made its debut on Bursa Malaysia and the animal health product manufacturer has been keeping busy, having launched 14 products since the fourth quarter of 2016 (4Q16).
— The Edge Markets

A surprise from Weida
Sarawak-based Weida (M) Bhd seems to be basking in a sweet spot of growth. The low-profile company, which is already in a position to benefit from the ongoing construction of the Pan Borneo Highway project in its home state, is set to see its income prospects improve further with the hospital concession that it has just bagged over the week.
— The Star Online

Ringgit opens higher against US dollar
The ringgit rose at the opening against the US dollar today on positive spillover effect from the French presidential election, where Emmanuel Macron clinched victory over Marine Le Pen.
— New Straits Times

‘Affordable’ homes anything but affordable to build, property experts say
Affordable housing is a segment with clamouring buyers, but it is also the one that developers are not outwardly interested in supplying.
— Malay Mail Online

After facing down scandal, PM Najib vulnerable on rising costs
Malaysia’s 1.6 million public servants have long been one of the most reliable vote banks for Prime Minister Datuk Seri Najib Razak’s ruling coalition, but as he prepares to seek re-election he faces warnings that soaring living costs risk eroding that support.
— The Edge Markets

China’s capital controls behind Bandar Malaysia deal collapse
China’s new measures to control flight of capital from its shores contributed to the recent move in Malaysia where the share sale agreement (SSA) over the Bandar Malaysia project was aborted.
— Free Malaysia Today

Najib risks losing support due to rising cost of living
Malaysia’s 1.6 million public servants have long been one of the most reliable vote banks for Prime Minister Najib Razak’s ruling coalition, but as he prepares to seek re-election he faces warnings that soaring living costs risk eroding that support.
— Free Malaysia Today