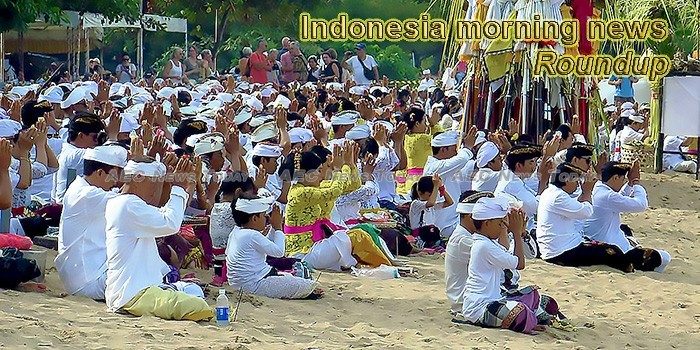 IA-CEPA to not only cover trade sector: vice president
The Indonesia-Australia Comprehensive Economic Partnership Agreement (IA-CEPA) will also cover the investment and service sectors, such as health and education, in addition to the trade sector, Vice President Jusuf Kalla stated.
— Antara News

As Trade War Bites, Indonesia Chases Deals to Push Exports
Indonesia is going all out to strike trade pacts with about a dozen countries and blocs as the U.S.-China trade war hurts its shipments and threatens to worsen a current-account deficit.
— Bloomberg

Indonesia and Australia sign long-awaited free trade deal
After more than nine years of talks, Australia and Indonesia have signed a free trade agreement. The deal had been delayed after Australia signaled its support for Israel, sparking outcry from Muslim-majority Indonesia.
— DW

Officials fear up to 100 still trapped in Indonesia mine
Indonesian authorities have warned that up to 100 people could still be trapped and feared dead inside a collapsed gold mine despite a painstaking rescue effort that has so far plucked 19 people alive from the rubble but also seen nine deaths.
— AL Jazeera

Fisherfolk told to keep distance from active Anak Krakatau
The Center for Volcanology and Geological Hazard Mitigation (PVMBG) has called on fisherfolk to stay alert and maintain a safe distance from Anak Krakatau (Child of Krakatau) in Lampung after an increase in eruptive activity was recorded in late February.
— The Jakarta Post

Indonesia’s online P2P loan sharks are driving people to suicide
PRESIDENT JOKO Widodo could not resist spouting jargon as he talked up the Southeast Asian country’s technological prowess during a recent election campaign debate, while his opponent Prabowo Subianto appeared startled by the tech-heavy question tossed at them.
— SCMP

Indonesia at a political crossroads
Incumbent President Joko Widodo offers the electorate the continued prospects of a confident, cosmopolitan nationalism founded on openness to the world as well as an assiduously cultivated religious pluralism at home.
— The Straits Times (paywall)

Prabowo Sees Deficit of BPJS Kesehatan as Small Matter
Presidential hopeful Prabowo Subianto considered an issue on the deficit of the Health and Social Security Agency (BPJS Kesehatan) as a small matter that can easily be solved if elected as the president. Prabowo made the statement during a dialogue event with seven organizations in the health sector.
— Tempo.co

Jokowi ready to launch ‘Nawacita 2.0’: Golkar
The Golkar Party has announced that a strategic program for 2019-2024, called Nawacita Chapter II from incumbent Joko “Jokowi” Widodo, was ready to be implemented should Jokowi be reelected as president in April.
— The Jakarta Post

Indonesians Urged Not to Instigate Conflicts Owing to Elections
Religious Affairs Minister Lukman Hakim Saifuddin called on the entire nation to remain united and not to instigate conflicts because of different political choices in this year`s general elections.
— Tempo.co

PPP and the Poll on Ineffective Religious Sentiment Campaign
The United Development Party (PPP) admits that they are not worried about the findings reported by pollster Indonesian Survey Circle (LSI) Denny JA on the ineffectiveness of campaigning religious sentiments.
— Tempo.co

Nearly three dozen people have been trapped for days in collapsed gold mine in Indonesia
Rescuers brought an excavator to the remote Indonesian gold mine that collapsed earlier this week, trapping dozens, hoping to speed up rescue efforts despite the risk of triggering landslides.
— Intellasia

Is Indonesia losing favorable clean energy policies?
Indonesia once had policies that supported the development of clean energy, but regulatory changes in the last 10 years seem to be the root of the problem of why abundant sources of renewable power in the country have been left mostly untouched after more than seven decades after the country’s independence.
— The Jakarta Post

‘Open prison’: The growing despair of refugees stuck in Indonesia
Earlier this month Sajad Jacob, an asylum seeker from Afghanistan who had been living in an Indonesian detention centre for nearly two decades, died in the hospital.
— AL Jazeera

Indonesia to see more mergers, acquisitions of banks this year
Mergers and acquisitions in Indonesia’s banking industry are projected to flourish this year as foreign investors, mainly from Japan and South Korea, have begun to acquire local banks, while big state-owned and private lenders have also shown interest in acquiring the smaller ones.
— The Jakarta Post

In small gathering, Islamists say ready to ‘jihad’ against enemies
Hundreds gathered outside the National Mosque here today to protest against purported anti-Islam elements they claimed were flourishing under Pakatan Harapan (PH).
— Intellasia

Hunting Pasar Jakarta, capturing human life in traditional markets
It was pouring rain at 8 a.m. on Sunday. While most Jakartans chose to stay under the warmth of their blankets, some 30 young men gathered in Senen Market in Central Jakarta and blended in with the trading there.
— The Jakarta Post