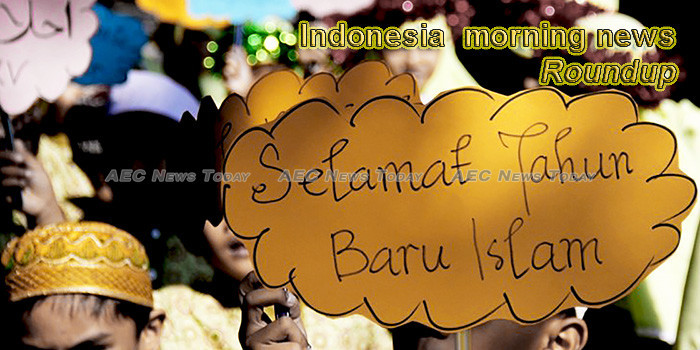 Jokowi Says New Capital Will Cost Rp466tn, 19pct from APBN
President Joko “Jokowi” Widodo has announced the new capital city will be built in the regencies of North Penajam Paser and Kutai Kartanegara, East Kalimantan. He said the relocation would cost up to Rp466 trillion.
— Tempo.co

Indonesian minister clarifies no deal struck between China’s Ping An and national health insurer
A senior Indonesian minister in charge of ties with China was forced to clarify over the weekend that Jakarta had not struck any deal with Ping An, China’s biggest insurer by market value, to improve the national health insurance agency’s information technology systems.
— South China Morning Post

Authorities Warn Burnt Ship Wreck May Endanger Sea Traffic Near Masalembu Islands
The Transportation Ministry issued a warning to ship captains on Saturday to steer clear of the burnt wreck of KM Santika Nusantara, a passenger ship that had caught fire while at sea near Masalembu Islands in East Java on Thursday night, killing three people.
— Jakarta Globe

Cargo ship sailing in Maluku waters loses contact
A Cessna aircraft was deployed Monday to search for cargo ship MV Nur Allya, which has been without contact since communication was cut off on Aug. 20 near Buru Island in Maluku.
— The Jakarta Post

You Can Now Pay for Your Passport on Tokopedia, Bukalapak or Finnet
Paying for your passport could be a bit of a chore since after submitting all the complicated paperwork at the Immigration Office, you still have to find an ATM or a post office to wire the fee.
— Jakarta Globe

Graft watchdogs cry foul over ‘conflict of interest’ in KPK leadership race
The selection committee for the next Corruption Eradication Commission (KPK) leaders is once again in the spotlight following its announcement of a 20-candidate shortlist on Friday.
— The Jakarta Post

Forest preservation prioritized in capital city transfer to Kalimantan
The government has made assurance that relocation of the capital city from Jakarta to East Kalimantan will ensure that the province’s preserved forest remained intact.
— Antara News

Abdul Somad Faces Charges on Blasphemy; Ahok: Just Pray
Former Jakarta governor Basuki Tjahaja Purnama or Ahok suggested Muslim preacher Abdul Somad pray a lot in dealing with charges of alleged blasphemy. As a Christian, he claimed that he did not have any issue regarding Somad’s remarks.
— Tempo.co

Albanese calls for Indonesia white paper, more tourists to Australia
Labor leader Anthony Albanese has called on the Morrison government to commission a white paper on Australia’s economic relationship with Indonesia, as parliaments in both nations move towards ratifying a free trade deal.
— The Sydney Morning Herald

Telkomsel Preps Telecommunication Infrastructure in New Capital
Telecommunication operator firm PT Telkomsel stated its readiness to welcome the relocation of the capital city to East Kalimantan that has been finally announced by President Joko “Jokowi” Widodo as the new administrative hub.
— Tempo.co

Time’s up: Outgoing councillors leave deputy governor seat vacant, pass fewer bylaws
With new Jakarta city councillors being inaugurated on Monday for the 2019-2024 term, their predecessors are leaving office with a substandard track record for producing bylaws and having failed to select a new deputy governor.
— The Jakarta Post

Ministry persuades SMEs to boost productivity, quality
The Industry Ministry has highlighted the importance of technology application for small- and medium-scale enterprises (SME) to boost productivity and quality while increasing access to the global market.
— Antara News

Government sets sights on world’s top varsities for HRD collaboration
The Indonesian government is eyeing the world’s leading universities to collaborate with national universities to boost the competency of human resources in the face of the Industrial Revolution 4.0.
— Antara News

Goodbye West Java, hello Jakarta: Bekasi, Depok want to merge with the capital
A resident of the satellite city of Bekasi, Randa Gusti says he spends more time in the nation’s capital for work and leisure than other areas in West Java – Bekasi’s administrative region.
— The Jakarta Post

Police officer burned during protest dies after days of treatment
A police officer who suffered severe burn injuries when dealing with a recent protest in Cianjur, West Java, died in the early hours of Monday after a few days of intensive medical treatment.
— The Jakarta Post

Puffing on cigarettes in smoke-free areas still rampant, survey finds
Air pollution in Jakarta is not only happening outdoors but also indoors, as tobacco smoking is still widely done within smoke-free area in shopping malls and markets in Jakarta.
— The Jakarta Post

Public gallery to honor Tjong Yong Hian, Medan philanthropist who shaped the city
It has been six years since the Medan administration in North Sumatra officially renamed what was previously known as Jl. Bogor after its first Chinese community leader, Tjong Yong Hian (1850-1911). Yong Hian, who was granted the title of majoor (major) by Dutch colonial rule in the early 1900s, the highest rank for an ethnic community leader, came to be recognized as a notable figure in the city’s history for his contributions in the fields of education, health and culture.
— The Jakarta Post

Suspected sex abuser released after victim settles out of court
A man arrested for allegedly molesting an underage girl on a commuter train has been released from detention after the victim’s family decided to settle the case out of court.
— The Jakarta Post

Two unidentified bodies found in burnt-out car in Sukabumi
The police in Cidahu regency in Sukabumi, West Java, are trying to identify two bodies discovered in the wreckage of a burned-out car on Sunday.
— The Jakarta Post

Man denied ambulance, carries nephew’s dead body on foot
Supriyadi, 40, was forced to carry home on Friday the body of his 9-year-old nephew, Muhammad Husen, who was found drowned in the Cisadane River in Tangerang, Banten, after a local community health center (Puskesmas) refused to provide an ambulance.
— The Jakarta Post

Lao Morning News For May 31