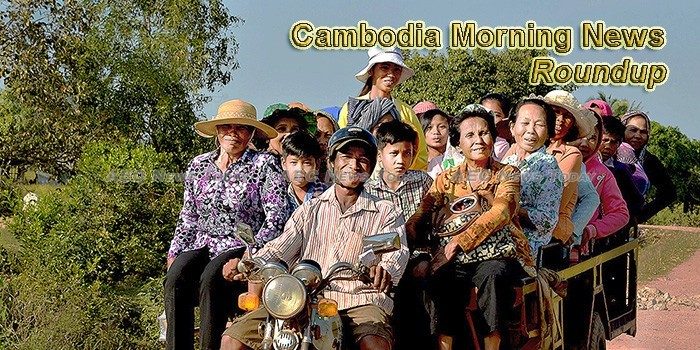 Western rail line to be fully restored by July: Minister
With the last section of the railroad expected to enter into service in early July, the restoration of the western rail line will be complete ahead of the general elections in July 29, the Minister of Transport said yesterday.
— Khmer Times

Japanese Investors to Invest More in Industry and Services in Cambodia
Speaking with Cambodian Minister of Labor Ith Sam Heng on Tuesday at the Ministry of Labor, President of Japan-Cambodia Interactive Association (JCIA) Fumio Yamada said that JCIA will bring its members as major investors in Japan to invest more in industry and service sectors in Cambodia in the next three months.
— Fresh News

CamAir gets first aircraft
Cambodia Airways, which started operations in the Kingdom this year, has announced the arrival of its first aircraft, an Airbus A319 that it expects will contribute to increasing air traffic to and from Cambodia.
— The Phnom Penh Post

Thailand, Cambodia pledge to strengthen tourism ties
With relations between the two countries at a high point, Cambodia and Thailand have agreed to boost cooperation in tourism to bring more tourists to their markets.
— Khmer Times

Farmers worry about effect of pesticide ban
The agriculture industry is waiting to see the potential impacts after the import and trade of pesticides were put on hold in the Kingdom.
— The Phnom Penh Post

Jailed Opposition Members in Cambodia ‘Suffering’ From Poor Treatment in Prison
Fifteen Cambodians imprisoned on charges widely viewed as politically motivated are suffering as the result of undue punishment in jail, according to two opposition officials who visited them Tuesday.
— Radio Free Asia

Floating Village of Chong Khneas: Read This Before You Go
Did you know that Siem Reap contains the largest freshwater lake in all of Southeast Asia, called the Tonle Sap Lake? It’s one of the richest inland fishing grounds in the world, home to not only over 200 different species of fish but also to over one million people.
— Wanderluluu