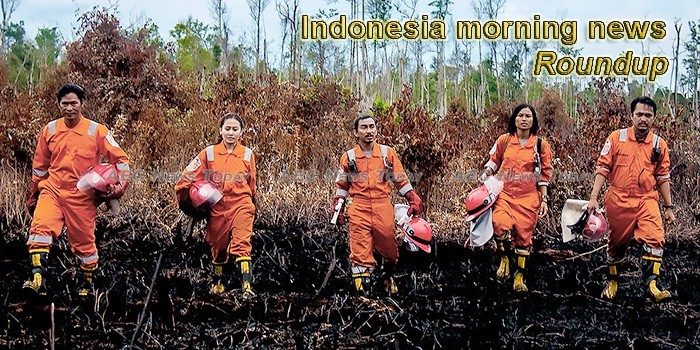 Flash Floods, Earthquake in Indonesia Kill Over 80
The number of people killed after torrential downpours triggered flash floods and mudslides that tore through mountainside villages in Indonesia’s easternmost province has climbed to 79, with dozens of others missing, officials said Monday.
— VOA

Dilemma for Widodo as China casts shadow on Indonesia polls
Joko Widodo, the president of Indonesia, faces an election next month in the world’s largest Muslim-majority country, and presenting himself as defender of the faith is central to his campaign strategy.
— Financial Times

Indonesia warns EU on palm oil draft, says “examining” relations
Indonesia slammed on Monday the European Commission’s adoption of a draft regulation to phase out the use of palm oil in renewable transportation fuel and warned the move could hurt relations with EU members backing the proposal.
— Reuters

Govt Eyes US$17.6mn Foreign Exchange from Tourism
Bank Indonesia Governor Perry Warjiyo said the government and the central bank had pegged the target for the tourism sector’s foreign exchange this year at US$17.6 million.
— Tempo.co

Election countdown / Government’s anti-communist raids echo Indonesia’s brutal purges
Bookseller Yanto Tjahaja was tending to his shop when soldiers burst through the door and confiscated a dozen titles over claims they violated one of Indonesia’s most sensitive taboos: communism.
— Southeast Asia Globe

Water tanks improving the lives of families in Indonesia
NTA East Indonesia Aid works to reduce poverty in the rural communities of Indonesia’s East Nusa Tenggara province, one of the poorest parts of the Indonesian archipelago. In the islands of West Timor and Flores, where NTA works, 30% of people live below the national poverty line.
— Relief Web

KPK Seizes Hundreds of Millions of Cash from Minister’s Office
The Corruption Eradication Commission (KPK) has seized hundreds of millions of cash in rupiah and dollar during its search in the office of Religious Affairs Minister Lukman Hakim Saifuddin today, March 18.
— Tempo.co

Minister: Link and Match Program as Basis of Education Reform
Industry Minister Airlangga Hartarto said that the ministry’s link and match program between vocational schools (SMK) and the industry would be a basis of education reform at SMK that was expected to open up bigger job opportunities for their alumni.
— Tempo.co

Indonesia urged to invest in understanding Papuans
Australia-based anthropologist Yamin Kogoya said there is too much emphasise on ramming the Indonesian state ideology down Papuans’ throats.
— Radionz

What Thai generals can learn from Indonesia’s military: Jakarta Post columnist
On April 17, Indonesians will also exercise their constitutional right to directly elect their president and vice president, as well as members of the House of Representatives, the Regional Representatives Council and various local councils.
— The Straits Times (annoying popups)

Same old issues slow Indonesia’s digital economy
The British like to drink tea and the Brazilians love to play soccer. Every country has stereotypes attached to it, and while we must take each stereotype with a pinch of salt, there is usually a grain of truth behind why a country is perceived in a certain way.
–– The Jakarta Post (paywall)

Indonesia, Malaysia to Protest against Palm Oil Ban to EU
Coordinating Minister for Economic Affairs Darmin Nasution said Indonesia and Malaysia had agreed to send their envoys to protest the European Union’s plans to ban palm oil as biofuel by 2030 as noted in the draft of EU’s Delegation Act.
— Tempo.co

Footwear exports to expand this year
Industry Minister Airlangga Hartarto is optimistic the exports of footwear products will increase to US$6.5 billion this year and reach $10 billion in the next four years.
— The Jakarta Post

Experts, activists disappointed with ‘non-debate’
In what has become a pattern for this year’s series of presidential election debates, observers and activists have expressed their disappointment with the lack of attention that many key healthcare, education, manpower, and sociocultural issues received.
— The Jakarta Post