‘Final’ round of RCEP talks fail to reach agreement, but it’s not over yet 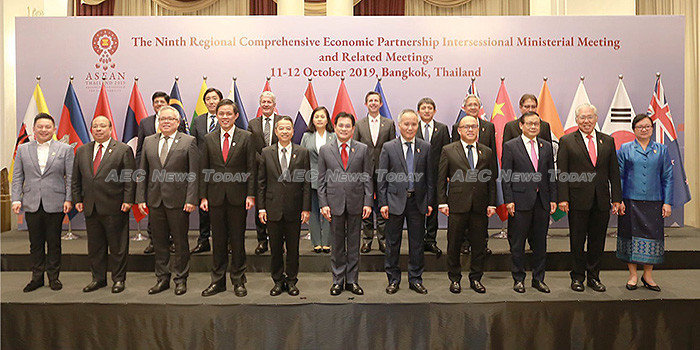 Trade ministers and negotiators in Thailand for what was scheduled as the final round of negotiations on the establishment of what will become the worlds largest free trade agreement (fta) once implemented, yesterday (Oct 12) failed to reach an agreement on the text of a joint declaration to bring it into effect.

The disappointing conclusion to yesterday’s meeting followed two days of intense negotiations between representative of 16 countries attempting to give birth to the Regional Comprehensive Economic Partnership (RCEP), to offset some of the damaging spill-over effects of the US-China trade war.

Comprising the 10 Asean member states and its six FTA partners — China, Japan, India, South Korea, Australia, and New Zealand — the RCEP will cover almost half of the global economy if finalised.

There were signs early on that yesterday’s meetings may have met an in-pass when proceedings to open the 9th Ministerial Meeting on the RCEP did not get underway until just after 6pm; more than one hour after the meeting was scheduled to end.

Chaired by Thailand deputy prime minister and Minister of Commerce, Jurin Laksanawisit, the meeting had hoped to finalise details related to investment, e-commerce, rules of origin, and trade remedies. The latter is of particular concern to India whose inefficient, heavily taxed, and heavily subsidised industry sectors fear a deluge of cheap Chinese imports.

By the time the meeting concluded late last night 14 of the trade pacts 20 chapters had been agreed, with India reported to still be the lone holdout on the remaining six.

A report in Japan Today, said India’s recalcitrance drew criticism (not for the first time) from Singapore, with one trade official quoted as saying, ‘“the meeting was very serious in the afternoon. They had almost banged the table”’.

The Indian government is under intense pressure at home to withdraw from the RCEP.

On Thursday (Oct 10) a coalition of more than 180 farmer organisations from across India burnt an effigy of India’s Minister of Railways and Commerce & Industry, Piyush Goyal, in Delhi ahead of his trip to Bangkok.

After the meeting yesterday Mr Goyal tweeted that he had ‘participated in deliberations to promote trade & investment to achieve mutual economic growth, while safeguarding the interest of our domestic industry and farmers’.

Two-way trade between India and China hit a high of $95.54 billion in 2018, but of this India’s exports comprised only $18.84 billion. The trade deficit has long been a significant concern of India, with or without the RCEP.

According to Chinese government mouthpiece Global Times ‘the two leaders agreed that China and India should respect and learn from each other so as to jointly achieve common development and prosperity’.

A statement issued by India’s Ministry of External Affairs (MEA) said that the two leaders ‘shared the view that an open, inclusive, prosperous and stable environment in the region is important to ensure prosperity and stability. They also agreed on the importance of concluding negotiations for a mutually-beneficial and balanced RCEP’.

Separately The Times of India reported that China had agreed to discuss India’s long-standing trade concerns, including on pharma and software, to reduce the trade deficit, while also considering New Delhi’s quest for a balanced deal in the RCEP negotiations. A senior minister from both sides has been appointed to lead the review.

Pursuit of the ‘holy grail’ continues

Describing the day’s meetings at a media briefing afterwards as “very tough and serious”, Mr Laksanawisit said he remains “optimistic” that the six remaining chapters of the pact can be finalised before the RCEP ministerial meeting as part of the 35th Asean Summit and Related Summits in Bangkok early next month.

Finalising the RCEP has become somewhat of a ‘holy grail’ for successive Asean chairs since talks begun in 2013. From an initial goal of concluding the pact within two years, the kudos that will go with getting an agreement have so far eluded Malaysia (2015), Lao PDR (2016), the Philippines (2017), and, last year, Singapore.

With the end in site it is fair to say that Thailand, one of Asean’s founding members, can almost ‘taste’ the victory almost within its grasp.

In an attempt to close the gap and seize the coveted prize, Mr Laksanawisit said the RCEP Trade Negotiating Committee (TNC) will meet in Bangkok between Oct 14 and 19 in an attempt to find a solution to the remaining sticking points: trade remedy measures, trade competition, trade in service, rules of origin, investment, and e-commerce.

As with the doomed Trans-Pacific Partnership Agreement, (TPPA), negotiating the worlds largest fta has proved more problematic than originally imagined. Meanwhile, Beijing, in desperate need of new, tariff-free markets, has floated the idea of an alternative trade deal that will leave India out of the picture.