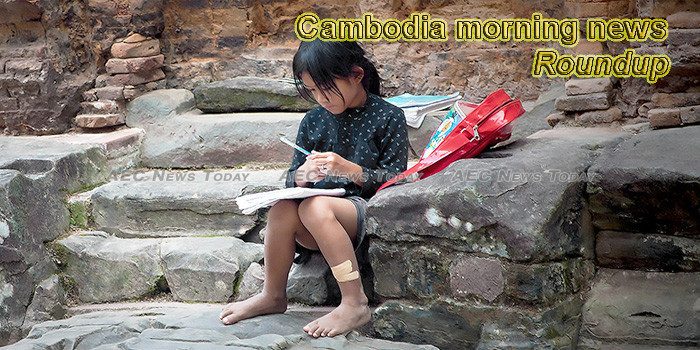 US Is Obliged to Demine Cluster Munitions in Cambodia, Says US Embassy Phnom Penh
US Embassy in Cambodia’s Chargé D’Affaires Michael Newbill, acknowledged that demining landmines (massive contamination), cluster munition remnants (heavy contamination), and other unexploded ordnance (UXO) in Cambodia is the US’s obligation, speaking in a meeting with First Vice-President of the Cambodian Mine Action and Victim Assistance Authority (CMAA) Ly Thuch on Wednesday.
— Fresh News

A Pillar of the Paris Peace Accords, on “Seeking Justice in Cambodia”
One of the greatest disappointments of my public life has been the international community’s failure – and my failure, the failure of all of us – to match the achievement of peace in Cambodia, which so many of us worked so hard to achieve, with any comparable achievement in relation to democracy and human rights.
— VOA Cambodia

Cambodia – North Korea ties still in the woods
Cambodia is among the five Southeast Asian countries that have an embassy in Pyongyang. The bilateral relationship has fluctuated over time, due to three factors: leadership, economics, and geopolitics.
— Khmer Times

Cambodia’s Democracy and EU Trade Privileges: Taking a Long-Term View
Withdrawing Cambodia’s EBA privileges might not do more harm than good.
— The Diplomat

Metfone revenue tops $2.2 billion over 10 years in Cambodia
Metfone, the first telecommunications brand of Viettel in an overseas market, posted an accumulated revenue of more than US$2.2 billion in its first 10 years of operation.
— Vietnam News

Cambodia Is Able to Retain EBA Preferential Scheme
In the last couple of days, I have heard a lot of debates among Cambodian politicians, academicians, and ordinary citizens regarding the withdrawal from Cambodia the European Union’s Everything But Arms preferential scheme.
— Fresh News

Kingdom not yet ready for LGBT laws: Hun Sen
Prime Minister Hun Sen yesterday said the Kingdom is not ready yet to create legislation to allow same-sex marriages because the issue is still causing controversy in some countries.
— Khmer Times

A return to Cambodia’s Koh Russey island
Despite being one of the first stops on China’s new Belt and Road Initiative, the roads in southern Cambodia still leave a lot to be desired.
— The National

PM to opposition: ‘I am not going to die any time soon’
Prime Minister Hun Sen told members of the opposition on Wednesday not to wait for his death before starting a movement to take power because he wouldn’t be dying anytime soon.
— The Phnom Penh Post

Cambodia Sees Opportunity to Present its Potentials to Investors in Jiangsu of China
China has proposed Cambodia to send a working group to present the Kingdom’s tourism potentials, especially in Preah Sihanouk province, to Chinese investors in Jiangsu province.
— Agence Kampuchea Presse

Ministry confirms Angkor Gold oil and gas aspirations
A senior official with the Ministry of Mines and Energy confirmed yesterday that Canadian firm Angkor Gold Corp is seeking to diversify its operations in the Kingdom into oil and gas and that the company is now applying for exploration licenses.
— Khmer Times

NEC names three key tasks
The National Election Committee (NEC) has identified three key tasks to be completed simultaneously this year as it prepares to hold the third mandate district, provincial and municipal council elections in May.
— The Phnom Penh Post

Cambodian Diplomat Chief to Attend HLS of 40th Session of Human Rights Council in Geneva
His Excellency Prak Sokhonn, Deputy Prime Minister, Minister of Foreign Affairs and International Cooperation, will lead a Delegation to attend the High Level Segment (HLS) of the 40th Session of the Human Rights Council (HRC) from 24-26 February 2019, in Geneva, Switzerland, according to the ministry’s press release dated Thursday.
— Fresh News

‘Activities aimed at destroying peace’ must be halted
Minister of Interior Sar Kheng on Wednesday ordered provincial administration officials and the armed forces to be ready to prevent and intercept all activities by outlawed and (self) exiled groups that attempt to push Cambodia into war and chaos.
— The Phnom Penh Post

Japan aid totals $135 million
Minister of Foreign Affairs and International Cooperation Prak Sokhonn on Wednesday said the Japanese government had provided the Kingdom with $134.38 million in aid packages in the past 12 months – $19.42 million in grants and the remaining $114.96 million in loans.
— The Phnom Penh Post

Public bidding opens for 60-megawatt solar project
With the Kingdom aiming to increase its energy output, the government is calling on private firms to enter the bidding process for the construction of a 60-megawatt solar plant project in Kampong Chhnang province.
— Khmer Times

Government prioritising national working group over CPP’s
The government has been adjusting the national level working group more than the Cambodian People’s Party’s working group to help promote its rectangular strategy and better provide services to the people at the sub-national level, said Deputy Prime Minister and Minister of Interior Sar Kheng.
— The Phnom Penh Post

30 Years for Belgian E Importer
A Cambodian woman was sentenced to 30 years in prison and fined 40 million riel over a drug importation case.
— Cambodia News English

Push for cultural icons to join UN heritage list
The Ministry of Fine Arts and Culture is hoping to have Cambodian musical theatre Lakhon Yike, traditional silver handicrafts and other art forms placed on Unesco’s cultural heritage list, it announced on Wednesday.
— The Phnom Penh Post