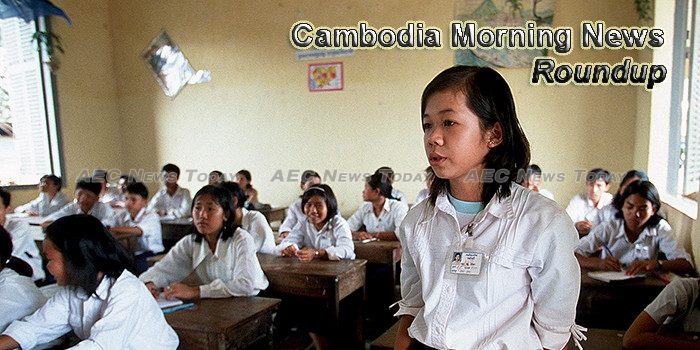 Cambodia beaten by Thailand in heated annual rice contest
For the third year in a row Cambodia has failed to take the top spot in the World’s Best Rice contest, instead earning second place after Thailand.
— The Phnom Penh Post

Agriculture law suspended after PM criticism
The Ministry of Agriculture announced the suspension of a controversial draft law to regulate the agricultural sector yesterday evening, hours after Prime Minister Hun Sen tore into the proposed law and called on the ministry to “drop it”.
— The Phnom Penh Post

In Cambodia, push to end maternal deaths in remote areas
In the remote farming village of Sakreang, in Cambodia’s far north-east, Romam Pcheuk visits pregnant women in their homes.
— UNFPA

Government asks South Korea for police training
Cambodia on Monday requested assistance from experts in South Korea to provide training to police forces on how to “crack down” on criminals, an official said yesterday.
— The Phnom Penh Post

PM Hun Sen to Attend ASEAN Summits
Prime Minister Hun Sen will lead a high- level delegation to attend the ASEAN Summit and related Summits, under the theme “Partnering for Change, Engaging the World”, to be held from 12 to 14 November 2017 in Manila, Republic of the Philippines, at the invitation of His Excellency Rodrigo Roa Duterte, President of the Republic of the Philippines.
— Fresh News

‘Eclectic unity’ is served up at Intégrité café
Over the last five months, Sabrina Wong and Paul Sitai have been building a stylish and eclectic new café, restaurant and bar with a key component as its foundation – integrity.
— The Phnom Penh Post

Apple’s iPhone X to launch November 24 in Kingdom
US tech giant Apple announced yesterday that the new iPhone X will officially hit Cambodian shelves on November 24, giving grey market importers in the Kingdom nearly a month of a head start to sell the latest model that was released in 50 major countries last week.
— The Phnom Penh Post