Accolades for Thailand in wake of Saudi asylum-seeker decision 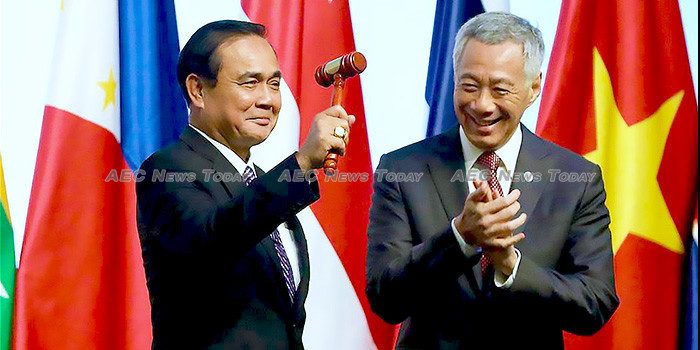 Since AEC News Today first broke details of Ms al-Qunun’s predicament on Sunday, Jan 6, news of her detention and pending return to an almost certain execution has engulfed the globe. Her less than seven-day-old Twitter account now has more than 94,000 followers.

While Thailand’s Ministry of Foreign Affairs (MFA) remains mute on the matter, the order to divert from Thailand’s standing procedure could only have come from the highest level of the Thailand government. Thailand historically has neither allowed asylum requests to be made in the country, nor recognised the legal status of refugees entering the kingdom.

Whether the exception provided for Ms al-Qunun indicates a softening in official policy is yet to be seen. However, when accepting the gavel signifying Thailand’s beginning as Asean chair, Prime Minister General Prayut Chan-o-cha specifically mentioned aiming to have all sectors of society collaborating to “help Asean become a people-centred community that leaves no one behind”.

The “leave no one behind” mantra is one that the Thai Prime Minister has repeated over and over again over the past 12 months, repeatedly committing Thailand to assisting its less developed neighbours in particular. An integral part of Thailand’s Eastern Economic Corridor (EEC) project is based on neighbouring countries being suppliers of parts and components to those driving the Thailand 4.0 programme.

Either way, the bold decision brought a quick and positive reaction from Phill Robertson, deputy Asia director, Human Rights Watch (HRW), who said “Thailand deserves credit for recognising the true nature of Rahaf’s predicament and the very serious harm she would face if they sent her back to be controlled by her family.

“Letting UNHCR (United Nations High Commissioner for Refugees) have access to her so they could arrange for refugee protection was the right thing to do to resolve this crisis and set it on a different track that will respect her decisions and her human rights.

“We’ll be following up with the Thailand government and UNHCR to help ensure that Rahaf can be resettled to a safe and secure place in the near future”, he added.

Similarly Giuseppe Vicentiis, UNHCR’s representative in Thailand said his organisation was “very grateful that the Thai authorities did not send back Ms Al-qunun against her will”.

Mr Vicentiis said UNHCR consistently advocates that refugees and asylum seekers – having been confirmed or claimed to be in need of international protection – cannot be returned to their countries of origin according to the principle of non-refoulement.

Mr Vicentiis said that the principles, which prohibit the return of anyone to a territory where they face a real risk of torture or ill-treatment are enshrined in Thailand’s other treaty obligations, including the UN Convention against Torture and Other Cruel, Inhuman or Degrading Treatment or Punishment

In recent years Thailand has applied significant effort to improving its human rights record, particularly in relation to migrant labour. On the political scene freedom of expression remains suppressed.

Last year a Thai government initiative set out to register every undocumented migrant worker in the country. In just three months 961,946 migrant workers were registered and verified. An additional 360,222 were registered, but needed to complete document verification processes, for which extra time was allowed.

The registration drive came ahead of new harsher penalties for undocumented migrant workers caught working illegally in the kingdom, as well as for those who employ them.

As part of efforts to rid itself of a warning from the European Commission of Directorate-General for EU marine and fisheries (DG Mare), though not a part of illegal, unreported, and unregulated (IUU) fishing infringements, multi-language websites, hotlines, and regional assistance centres have been established. Migrant workers with grievances now have a multitude of avenues through which they can seek assistance.

Last year Thailand saw its ranking on the US Traffic in Persons report issued by the US State Department increase from the Tier 2 Watch list where it had sat for two years, to Tier 2, reflecting “increasing efforts compared to the previous reporting period”.

One thorny issue that Thailand has vowed to assist with in its year as Asean chair is the ongoing Rohingya crisis in Myanmar. While many may take Thailand’s often repeated claim of being “friends with everyone” as a glib cliche, the country has an impressive record of often finding unique “Thai solutions” to complex situations.

Former Asean secretary-general and former Thailand minister of foreign affairs, the late Surin Pitsuwan was a renowned diplomat, humanitarian, and skilled negotiator who believed fervently in finding a solutions to every problem.

Having shown that it is prepared to make exceptions to a previously firm policy will only strengthen the country’s standing when Thailand Minister of Foreign Affairs, Don Pramudwinai, gets together with his contemporaries next week in Chiang Mai for the Asean Foreign Ministers’ Retreat.

This story was last updated at 14:15 on January 9: The spelling of Ms Alqunun’s name was changed to al-Qunun.