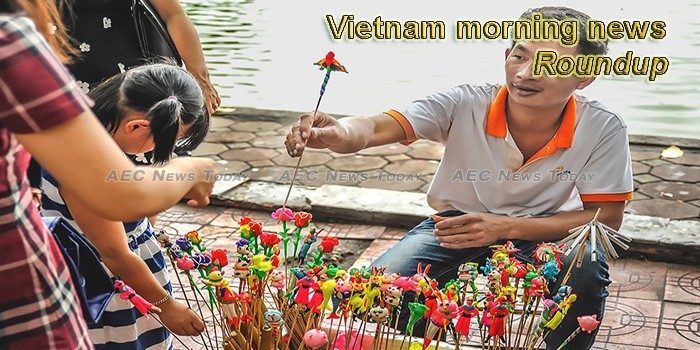 Supply overhang threatens condotel market
According to the Viet Nam Real Estate Brokers Association last year around 23,000 units of condotels, or condo-hotels, were offered for sale, and 65-70 per cent of them were snapped up.
— VietnamNet Bridge

IFC Said to Seek Buyer for Stake in $4 Billion Vietnam Bank
The World Bank’s International Finance Corp. is seeking a buyer for its stake in Vietnam Joint Stock Commercial Bank for Industry & Trade, the country’s third-largest lender by market value, according to people with knowledge of the matter.
— Bloomberg

ANZ Vietnam reports 75 pct fall in profit in H1
ANZ Vietnam’s profits fell 75 percent in the first half of this year following the sale of its retail arm to Shinhan Bank.
— VnExpress

E-payment continues to go mainstream in globalizing Vietnam
Electronic payments are becoming more and more common in Vietnam, according to Visa.
— VnExpress

Soi Dog congratulates the Hanoi people’s committee ban on dog and cat meat trade
Barely 24 hours after urging citizens to stop eating dogs and cats, Hanoi’s authorities have announced that the sale of dog meat will be banned from the central districts of the city from 2021.
— The Thaiger

Is Sony, LG leaving Vietnam?
The move to slash prices of Sony’s models has raised doubts that Sony is trying to dump stock before leaving Vietnam. But Sony has denied this.
— Vietnam Insider

Vietnam’s large banks to end cross-ownership soon
Favorable stock market and positive economic growth have helped large banks to step up divestment from other peers to meet the central bank’s regulation on holding shares at other credit institutions.
— The Hanoi Times

Facebook Faces a Challenge in Vietnam
Vietnam has enacted a law that would require technology companies to store personal data on its citizens locally.
— Market Realist

Vietnam needs to adapt to digitisation, meet hears
VIETNAM needs to improve the quality of its technical and vocational education and training to meet the requirements of digitisation and industry 4.0, a conference heard in Ho Chi Minh City.
— The Nation

JSR starts operation in Vietnam to address automotive demand
Vietnam—Japanese materials supplier JSR Corp. has invested $862,000 to establish trading operations in Vietnam, citing the exponential economic growth in the region as a primary reason for doing so.
— Rubber News

Huge HCMC urban area back on front burner after long delay
HCMC authorities might auction a huge, long-delayed mixed-use property development which will also include a golf course.
— VnExpress

HCM City uses Zalo mobile app to help users monitor traffic
HCM City Department of Transport announced on September 18 that it was working to integrate the urban traffic information portal into the Zalo mobile app in an attempt to reduce congestion.
— Vietnam Insider

Hundreds of shiny new BMW cars rust away at HCMC port
The cars are reportedly worth $17.6 million and cost the importer another $264,172 for leaving them at Saigon Port for two years.
— VnExpress (video)

VN food sector lures foreign investors
Viet Nam has a diverse and well-developed agricultural and food industry that offers vast opportunities to companies in the food industry, from sourcing to processing, a Hong Kong speaker said at a forum held on Wednesday in HCM City.
— Bizhub

Lam Dong leads in attracting FDI in hi-tech agriculture
Located in the Central Highlands, Lam Dong province is blessed with a mild climate and fertile soil suitable for agriculture. The province has made good use of its advantage to attract foreign investment in developing hi-tech farming.
— Nhan Dan Online

Vietnam Is One Of The Most Resilient EMs
While Vietnam hasn’t entirely insulated itself in the least from the EM turmoil YTD, as the headline Ho Chi Minh Stock Index remains 21.49% below the high reached at the beginning of April, the market remains one of the few EMs which maintains positive performance year-to-date at pretty much breakeven +0.34%.
— Seeking Alpha

Transparency critical for SOEs
Transparency is critical to enhance the efficiency of State-owned enterprises (SOEs) as Viet Nam enters a new phase of equitisation which will focus on quality rather than quantity.
— Bizhub

VN-Index back over 1,000 points
The VN-Index broke through the 1,000-point mark for the first time in more than three months on September 20.
— Vietnam Insider

Philippines Morning News For May 19