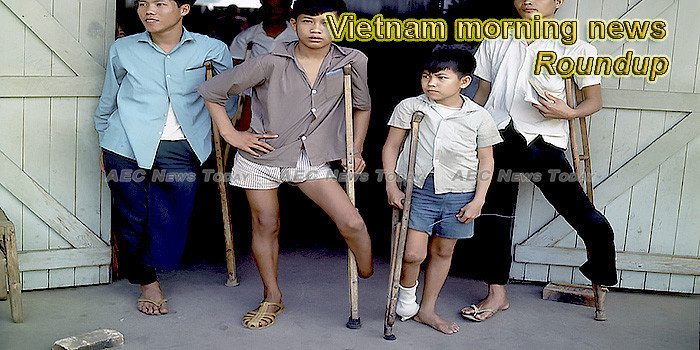 Enterprises’ observance of import-export laws to be evaluated
A workshop took place in Hanoi on December 4 to collect feedback from enterprises on a draft circular to evaluate the level of law observance in imports and exports and transit of goods.
— VNA NET

Vietnam launches crooked cop hotline amid corruption crackdown
Vietnam has set up a telephone hotline for people to report accusations of police corruption, state media said on Tuesday, amid a crackdown on graft in the Southeast Asian country that has jailed dozens of officials.
— Reuters

VNA, Thailand’s Public Relations Department deepen cooperation
The Vietnam News Agency (VNA) and the Public Relations Department (PRD) of Thailand will increase the exchange of information, especially in-depth reports on cultural and socio-economic affairs, with a view to affirming their role in providing official information in the era of digital technology.
— Vietnam+

Steps taken to draw foreign investment in Vietnam’s infrastructure
Vietnam needs about US$480 billion for infrastructure investment by 2020, with additional projects in the pipeline including around eleven power plants with total capacity of 13,200 MW and about 1,380 km of highway.
— Viet Nam Net

Investors rush to develop solar power projects
Vietnamese manufacturing business conditions improved to one of the greatest extents in the country’s almost eight-year survey history during November amid strong and accelerated expansions of output and new orders.
— Viet Nam Net

Concerns for Vietnam amid rising Chinese investment inflow
Experts said that the government and domestic firms must take actions against Chinese firms, which ship their unfinished products to Vietnam and then export them to the US through a Vietnam-based firm as an intermediary to avoid tariffs.
— Viet Nam Net

VN spends $260 m to import cars in November
About 13,000 cars worth US$260 million were imported to the Vietnamese market in November, up 2,000 units and $27 million compared with previous month, according to the most recent General Statistics Office (GSO) report.
— Viet Nam News

Prince Andrew’s visit gives boost to Vietnam-UK ties: Deputy PM
Deputy Prime Minister and Foreign Minister Pham Binh Minh had a meeting with the Duke of York, Prince Andrew, in Hanoi on December 4, expressing his belief that the guest’s visit will create new momentum for Vietnam and UK to optimize their complementary advantages.
— VNA NET

Hanoi puts the brakes on congestion
Hanoi is trying to implement measures to restrict the number of personal vehicles in the inner city in an effort to reduce traffic congestion and pollution.
— Viet Nam Net

Exhibition of old maps, photos shows Saigon of 200 years ago
An exhibition of old maps and panoramic pictures of Saigon is on at Nguyen Van Binh Street in the city’s District 1 from November 30 to December 9. It has 15 ancient maps, both printed and hand-drawn, created between 1799 and 1922.
— VN Express

Slow privatization hinders Vietnam from luring more foreign investment
The government will intensify inspections over not only all SOEs and state-funded projects, but also over the heads of these enterprises about how they have obeyed state regulations about privatization and divestment.
— Viet Nam Net

Retail, services sales hit $156b
The country’s total retail sales and services revenue reached US$156 billion in the first 11 months of the year, rising 11.5 per cent over the same period last year, or 9.34 per cent with inflation excluded.
— Viet Nam News

Red carpet for FDI, grey carpet for Vietnam’s environment
he great achievements in attracting large amounts of FDI have been overshadowed by concerns about pollution risks.
— Viet Nam Net

Việt Nam considered gateway for RoK to enter ASEAN: forum
Việt Nam is seen as a gateway for businesses from the Republic of Korea (RoK) to enter the ASEAN market, said experts at a forum in Hà Nội on December 3.
— Viet Nam News

Festival to celebrate Vietnam-France diplomatic ties
The Vietnam- France Festival will be held at the Institute of Cultural Exchange with France (IDECAF) in Ho Chi Minh City on December 5 as part of the city’s cultural activities to celebrate 45 years of diplomatic relations between Vietnam and France.
— VNA NET

Inspections up in Lào Cai ore trade
The General Department of Market Surveillance is examining the transportation of ore and minerals in border areas in the northern province of Lào Cai after the media reported ore was being smuggled from the province into China.
— Viet Nam Net