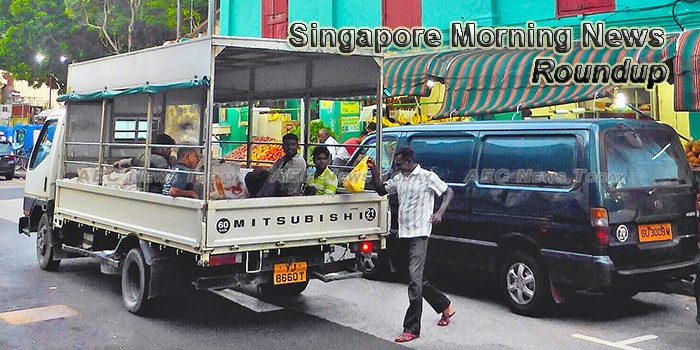 Debt collecting a brisk business in tough times
NOTWITHSTANDING Singapore’s slow economic growth in recent years, which has hit many industries, the debt collection sector stands out as one that is enjoying brisk business with debt collecting companies that The Business Times contacted reporting a significant increase in the number of clients who have engaged their services over the last three years.
— The Business Times

NetLink Trust sets Singapore IPO market off to a strong start
NetLink Trust is the biggest IPO in six years and is expected to boost total funds raised this year to S$2.8 billion.
— Channel NewsAsia (video)

Licensed to hack: Singapore looks into registration scheme for ethical hackers
Ethical hackers in Singapore could soon require a license to get their hands dirty, so to speak. The small Asian nation is currently requesting feedback on a proposed cybersecurity bill which will see ethical hackers having to obtain a license to do their work, and although it could seem quite restrictive, both the hacker and the company that developed the buggy software can benefit.
— Neowin

Grab raising $2b from SoftBank, Didi Chuxing at a $5b valuation, says WSJ
Grab, Uber Technologies Inc’s biggest rival in Southeast Asia, is raising as much as $2 billion in funding from Japan’s SoftBank Group and China’s top ride-hailing firm Didi Chuxing, the Wall Street Journal reported on Friday.
— DealStreetAsia

Eco-systems a must for developing technologies: ST Electronics head
ST Electronics believes that there is a need to develop industry eco-systems with the participation of government agencies, industry, research institutions, SMEs (small and medium enterprises) and startups.
— The Business Times

Halimah Yacob indicates she may run for President
SPEAKER of Parliament Halimah Yacob said on Sunday that she is considering standing in the coming presidential election in September.
— The Business Times

Asia under-insured against cyber threats: study
A REPORT by insurance market specialist Lloyd’s and risk modelling platform Cyence has found that even though losses from cyber attacks can potentially be as large as those caused by major hurricanes, Asia continues to be under-insured and economically vulnerable to such attacks.
— The Business Times

MyRepublic is pressured to get 2% of MVNO market share
Following its failure to secure Singapore’s fourth mobile operator license in December 2016, MyRepublic now plans to offer mobile services as a mobile virtual network operator (MVNO) in Singapore from October 2017 by buying wholesale capacity from any of Singapore’s three mobile operators – Singtel, Starhub or M1 – and offering services over their networks.
— Singapore Business Review

Semiconductor segment to keep fuelling manufacturing demand
Based on the advance estimates by the Ministry of Trade and Industry of Singapore, the manufacturing sector expanded its growth from the first quarter of the year to Q2 with its 8% increase.
— Singapore Business Review

Analysis: Singapore’s MFM mandate helping to clear dark clouds over bunkers
Singapore’s move to make mass flow meters mandatory for fuel-oil deliveries, starting this year, is not only helping to bring pricing transparency to an otherwise opaque market, but is also helping to weed out malpractices, a move that could send signals to other global bunker hotspots to follow suit.
— Hellenic Shipping News

What Singapore Employers Want From Gen Z – And How Far They’ll Adapt
Given that 30% of Singapore’s resident population is now made up of Gen Z’s who are digital-native post-millennials born from the mid-nineties onwards, a vast majority of them are now entering the world of work in Singapore. What do employers expect of this generation and how far will organizations adapt for them?
— CMO Innovation

Singapore gets on board China’s Silk Road push as ties get back on track
Singapore’s rocky relations with China are “on track” with plans for high-level official visits and upgrades to a free-trade pact.
— South China Morning Post

Singapore regulators apply ‘sandbox’ to support local fintech start-up
The “regulatory sandbox” system, which suspends regulations on a trial basis at the request of businesses, is a key part of the growth strategy the Japanese government worked out this year. Similar systems are already in use elsewhere in the world.
— Nikkei Asian Review