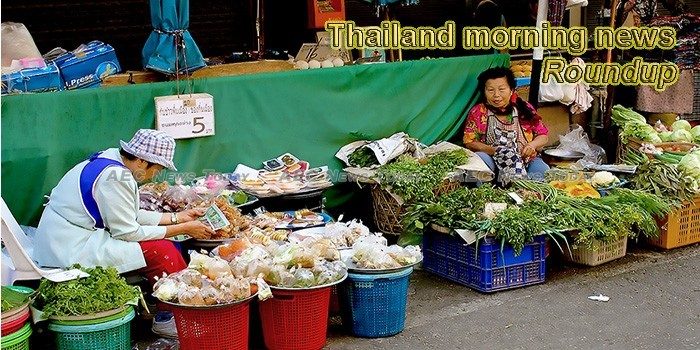 THAI to deploy larger planes to HK for stranded passengers
Thai Airways International will use larger aircraft to transport its passengers affected by flight cancellations in Hong Kong as Typhoon Mangkhut ripped through the city.
— Bangkok Post

Thailand in need of 53,000 in fishing industry
The government considers labor shortages in the fishery sector an urgent issue and is serious about easing this problem, as Thailand is one of the top exporters of fishery products in the world.
— News Today (video)

ToR for slate of transport projects set for fast track
With poll countdowns starting, the government has vowed to rev up approving terms of reference (ToR) for the planned infrastructure projects worth 300-400 billion baht within four months.
— Bangkok Post

Avalanche of bills seeking NLA approval
The Finance Ministry is pushing about 80 bills, including those involved with imposing taxes on digital platform operators and the land and buildings tax, to lawmakers for passage before next year’s general election.
— Bangkok Post

Copyright owners to get piracy relief
The Intellectual Property Department (IPD) is seeking to amend the Copyright Act to allow copyright owners to remove pirated content from websites without having to go through time-consuming court proceedings.
— Bangkok Post

Call for revamp of new motorway blueprint
The Ministry of Transport should revise the design of the elevated six-lane road on the Bangkok-Chon Buri motorway to reduce costs, construction time, pollution and land expropriation, an academic at King Mongkut’s Institute of Technology Ladkrabang (KMITL) says.
— Bangkok Post

Four years is all we have
HUMANITY HAS only about four years left to stabilise global temperatures and save the world from environmental catastrophe stemming from extreme climate change, scientists have warned.
— The Nation

More than 20 sea turtles killed by debris
Big piles of garbage floating in the sea have become a killing zone for 23 sea turtles, which were found dead or nearly dead on two beaches in Phuket and Phangnga provinces over the past two months, according to the Department of National Parks, Wildlife and Plant Conservation.
— Bangkok Post

Fishing for new workers
The Labour Ministry’s recent move to recruit additional migrant workers through a memorandum of understanding (MoU) system is a boost for the commercial fishing sector, which has suffered from a labour shortage.
— Bangkok Post

REPORT: Family clinics inject hope for stressed public health system
IT’S COMMON enough when seeking outpatient services at large public hospitals to arrive at 5am for a queue token for an appointment to see a doctor sometime around 2pm.
— The Nation

Government continues debt settlement program
The government is committed to helping the low-income earners especially those in the agricultural sector get out of debt.
— News Today (video)

Mixed reactions to Digital ID draft law
CYBER EXPERTS are weighing the pros and cons of a draft law about digital identification that will allow government agencies to collect citizens’ digital ID.
— The Nation

Thai parties cleared to ‘organise’ but still no gatherings allowed
Thailand’s leader on Friday relaxed the ban on political activities, paving the way for the general election tentatively set for next February.
— South China Morning Post

Roadmap to digital society in the work
The Ministry of Digital Economy and Society is drawing up a road map towards creating a “paperless and cashless society” in line with government policy.
— The Nation

Government offices doing away with the need for ID photocopies
Officials have announced that in keeping with the Thailand 4.0 agenda and national development strategies, photocopies of identification cards and home registrations will no longer be needed when engaging with state offices.
— Pattaya Mail

Over 20 sea turtles dying off Phuket and Phang-Nga in two months
One of Thailand’s best known marine biologists is alerting us about the carnage for Phuket’s turtle population over the past two months.
— The Thaiger

Coral reefs: divers volunteer as ‘gardeners’ to restore dying corals in Thailand
In contrast to many of Thailand’s most popular islands, Koh Ha’s charms lie exclusively beneath the water.
— South China Morning Post

Retailers urged to gain consumer insights via technology
Retailers need to create more value for consumers by using the proper equipment, data and technology, according to Will Yunfei Wu, project manager for RetailEX Asean, the largest annual international trade exhibition and conference in Southeast Asia.
— The Nation