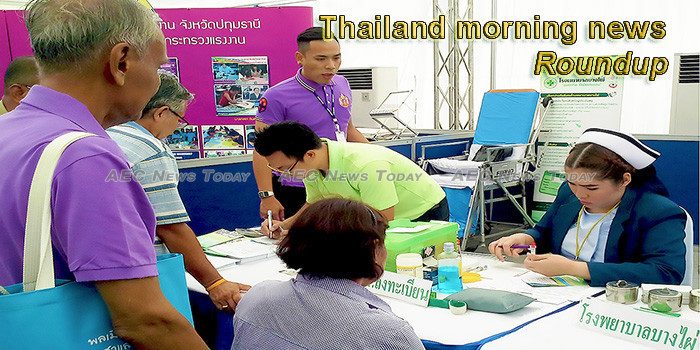 Thai central bank seen holding key rate, but hike possible next month: Reuters poll
Thailand’s central bank is widely expected to leave its key interest rate near a record low on Wednesday, though there was a good chance that the first rate hike in years could come in December, a Reuters survey showed.
— Reuters

Anti-graft body launches fresh probe into scandalous rice deals
The National Anti-Corruption Commission has launched a fresh investigation into rice deals committed under the government of former prime minister Yingluck Shinawatra which were suspected to be plagued with corruption.
— Thai PBS World

Myanmar forum targets chemicals as Asean awash in synthetic drugs (video)
Senior counter-narcotics officials from around the world met in the Myanmar capital Nay Pyi Daw last week in an attempt to thrash out policies to stem the flood of synthetic drugs throughout the region.
— AEC News Today

Blood is thicker than water: Rookie investigator arrests the man who murdered his father
The year 1998 was annus horribilis for a family in Chumphon province. On the night of Dec 5, Prasit Sae-ue, the sole breadwinner of the family was killed while his wife was pregnant with their son.
— The Phuket News

Marijuana patent bid shot down
The Commerce Ministry has allayed fears it will put the brakes on developing marijuana extracts for possible medicinal usage, saying the project has the backing of the government.
— Bangkok Post

Park department agrees to scrap concrete road plan to Panern Thung
The Department of National Parks, Wildlife and Plants Conservation has bowed to pressure from green groups by agreeing to scrap a plan to pave the 21.9 kilometre route leading to Panern Thung mountain peak in Phetchaburi province with concrete.
— Thai PBS World

Fetco proposes 10-year fund to replace LTF boon
The Federation of Thai Capital Market Organizations (Fetco) has proposed to Deputy Prime Minister Somkid Jatusripitak the idea of a new investment fund as a substitute to the long-term equity fund ((LTF), with a 10-year investment period and tax credit of no more than 100,000 baht.
— Bangkok Post

EU delegation to Thailand issues clarification on poll observers
The European Union on Sunday offered a clarification over a media report that it has asked to send an army of observers to monitor the upcoming general election expected in February next year.
— Thai PBS World

‘Very poor’ school students to be given additional financial aid
ABOUT 600,000 “very poor” students will soon receive an extra Bt800 per semester from the state, as the Equitable Education Fund (EEF) is stepping in to help reduce the educational disparities.
— The Nation

Thailand loses WTO dispute over cigarette imports
Thailand has failed to comply with a World Trade Organization ruling against its regulations on cigarette imports, a WTO dispute panel said on Monday, the first of two legal cases brought to the Geneva-based watchdog by the Philippines.
— Reuters

JWD does well in Q3, lifts 2018 revenue target
JWD InfoLogistics Plc earned revenue of Bt848.6 million and net profit of Bt70.1 million in the third quarter of the year, up 32.2 per cent and 24.1 per cent respectively from the same period of last year, chief financial officer Eakapong Tungsrisanguan said on Monday.
— The Nation

Rough seas challenge mission to salvage ‘Phoenix’
Singapore and Thai divers are expecting unfriendly cooperation from nature as they will soon kick off another attempt to lift the deadly “Phoenix” boat from the seabed off the resort island.
— Bangkok Post

Thai man arrested for pouring acid on wife, who dies after allegedly being refused treatment
A Bangkok man was arrested in the wee hours of this morning for allegedly splashing acid on the face of his wife in a fit of jealousy — an attack that led to her death within hours.
— Coconuts Bangkok