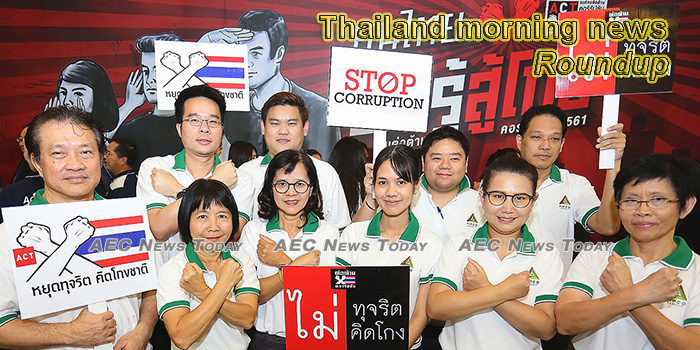 GSB: Startups continue bleeding confidence in Q3
Startup entrepreneurs’ confidence has continued to fall, dipping to 51.85 for the third quarter because of the faltering economy, cautious consumer spending and intensified competition, according to a Government Savings Bank (GSB) survey.
— Bangkok Post

School merger plans worry teachers, parents
The Education Ministry on Tuesday admitted that a proposed plan to merge 5,447 small-sized schools into larger ones over the next three years is worrying the many teachers and parents who will be affected.
— Bangkok Post

EC’s Office claims it has not yet made its ruling on Thanathorn’s loan controversy
The Office of the Election Commission (EC) has dismissed a claim, by the Future Forward spokesperson Pannika Wanich based on a leaked document, that the commission had already made a decision to rule against party leader Thanathorn Juangroongruangkit for the 191 million baht loan he extended to the party before the March 24th general election.
— Thai PBS News

Unemployment inches higher
The unemployment rate in Thailand inched higher to 1.1% in November, up from 1% in the corresponding month last year, the Bank of Thailand reported on Tuesday.
— Bangkok Post

Stray bullet hits minivan, kills female passenger
A 27 year old woman has died after a stray bullet hit the minivan in which she was travelling and penetrated the right-hand side of her body. The incident appears to be an accident. Thai Residents reports that the shooting took place around 1.30am yesterday morning.
— The Thaiger

Foreign investment in Thailand rises 106%
Though the number of foreigners given work permits in Thailand under the Foreign Employment Act of B.E. 2542 has dropped by 23%, the total value of foreign investment from last January to November has grown to 22.15 billion baht, amounting to a 106% increase.
— Pattaya Mail

Thammasat Establishes Connection with CLMV Countries by Bringing CLMV’s Elites to Links Thai-ASEAN Connections
The existence of ASEAN is not only for economic benefits but also for the connections between member countries. It also increases opportunities in the labor market to exchange human resources.
— QS Wow News

Thailand’s Fading Democracy
In 2019 democracy continues to elude Thailand. The country’s 2014 putsch overthrew an even more democratic system which, among other things permitted a half-elected Senate and elections at the local level. The coup produced five years of authoritarian military control.
— ISPI

MTEC pushes biodegradable plastic bag research commercialization
The National Metal and Materials Technology Center (MTEC) has joined forces with private companies and SMEs in Thailand to develop bags made from tapioca starch, which are capable of being completely decomposed in four months.
— Newsline (video)

B10bn lottery prizes ‘unclaimed’
More than B10.4 billion in prize money has gone unclaimed over the past 10 years, a Government Lottery Office (GLO) source says.
— The Phuket News

Thailand tops sepak takraw; PH 2nd overall
Thailand completed a double win in the men’s and women’s regu event of sepak takraw Tuesday, while the Philippines settled for a decent pair of podium finishes in the 30th SEA Games at the Subic Gym.
— Manilastandard.net

Thailand plans to upgrade airports nationwide
The Department of Airports (DoA) of Thailand is planning to spend 5.8 billion baht (191 million USD) upgrading airports across the country next year.
— Vietnamplus

Reservists flock to first day of army recruitment drive
A large number of reservists turned up to apply for officer training on Monday under an extended temporary contract on the first day of the army’s recruitment push, which will run until Jan 19.
— Bangkok Post

Central caves in to Phuket taxi drivers’ demands
Central Phuket has agreed to no longer operate its free shuttle service to bring tourists to the island’s main shopping mall following a protest by some 50 taxi drivers yesterday afternoon (Dec 9).
— The Phuket News

Bangkok air pollution on the rise again
Flimsy paper face masks will be the only winner in the latest round of air pollution smoking up Bangkok at the moment.
— The Thaiger

Study finds wage rise won’t carry over into higher prices
Manufacturers will not be allowed to raise the price of their goods after a Commerce Ministry study found the daily minimum wage hike of 5-6 baht, approved by the national wage committee last Friday, will only marginally affect their production costs.
— Bangkok Post

Academics call for “Dream Constitution” that truly reflects people’s aspirations
Speaking at a panel discussion on Constitution Day today, Mrs. Sunee Chairos, a former member of the National Human Rights Commission, and director of the Centre for the Promotion of Equality and Justice, said that a people’s constitution, which truly reflects the will of the people, would ease conflicts between them and the state because people will have free expression and the right to participate in decision making, from inception, of all state projects.
— Thai PBS News

Thailand marks Constitution Day
On the occasion of Constitution Day in Thailand, which falls on December 10 each year, civil servants and members of political parties are paying homage to His Majesty King Prajadhipok (Rama VII), who granted the first permanent charter to the Thai people on this day in 1932.
— The Pattaya News

Phuket’s high season delayed until after Christmas
The Hotel Specialist “Diversifying Phuket’s market to rely less on Chinese tourists is key to improving tourism in the province.” It will be a quiet Christmas in Phuket as the island’s high season will come late for hotels this year, with most reservations are for after the Christmas celebration.
— The Thaiger

Pattaya Police launch tripled renewed patrols, new zones, inspections in response to negative foreign press on tourist safety
In a stated response to a German documentary that painted Pattaya in a negative light and has caused Thailands interior ministry to order authorities to increase security local authorities have done just that.
— The Pattaya News

Chiang Rai Utd to face Beijing Guoan in 2020 Asian Champions League
Chiang Rai United will make their debut in the Asian Champions League competition in Group E against China’s Beijing Guoan and a pair of playoff winners, while Saudi Arabia’s Al Hilal did not have long to savour their 2019 triumph before discovering they will face 2015 finalists Shabab Al Ahli Dubai and Uzbekistan’s Pakhtakor in next year’s competition after the group stage draw on Monday.
— Bangkok Post

Pattaya chef gets wrist stuck in mixing machine in horrific accident caused by long sleeved jacket
Rescue services were called to a sweet maker’s kitchen after she got her right wrist caught in a mixing machine.
— The Pattaya News

Chiang Mai – the wellness destination
Wellness Tourism Resorts in Northern Thailand are quick to adapt, as wellness tourism is on the rise. Many operators now offer packages that include anything from ancient spas, yoga in the forest, and monastery stays to farm-to-table produce, local cooking, Thai kickboxing classes, and mineral hot springs.
— The Thaiger

Cancer in the workplace: Innovative diagnostic devices and treatments
Cancer itself is a very broad based topic. There are various forms of cancer and many different types of diagnostics and treatments that are currently available. In our earlier articles, we have touched on various aspects of cancer
— Bangkok Post

UPDATE: Polish and Thai kayak pair still missing off Phuket
As we enter day four of the search for 26 year old Mateusz Juszkiewicz from Poland and his female Thai friend, 23 year old Werakan Sirirakon, there is no update other than the pair are still missing.
— The Thaiger

One Bangkok’s intricate launch strategy
The developers behind One Bangkok, the 120-billion-baht megaproject being built next to Lumpini Park, are placing big bets on standing out in an area seeing a notable uptick in mixed-use development.
— Bangkok Post

Film review: Heartbound – Isaan migration through the lens of love
Filmed over ten years, a remarkable documentary offers a fresh and nuanced view on transnational marriages as it chronicles the lives of Isaan women who married Danish men and moved abroad.
— Isaan Record

Driver sees red, smashes window of car parked in disabled zone
A driver who’s had enough of able-bodied people parking in disabled parking bays has vented his frustration by smashing the car window of one such offender.
— The Thaiger