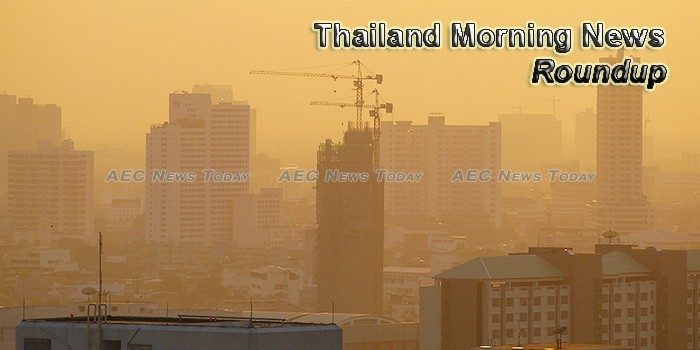 BoT expects Thai economy to grow 4% in first quarter
The Bank of Thailand (BoT) has forecast that the economic growth in the first quarter of this year will be similar to the last quarter of 2017 at 4%.
— NNT

PM calls for increased efficiency of public services
The Prime Minister has called on a government committee to accelerate its efforts to enhance public services and resolve the controversy over the housing project for judges at the foot of Doi Suthep.
— News Today (video)

12% boost in March car sales: Toyota
AUTO SALES in Thailand grew by 12.1 per cent in March with 95,082 vehicles sold, according to figures from Toyota Motor Thailand Co Ltd (TMT).
— The Nation

SCB prepares for earnings decline
Infrastructure investment over the next few years to prepare for digital transformation is expected to continue to deal a blow to Siam Commercial Bank’s (SCB) earnings, its chief says.
— Bangkok Post

Cabinet gives nod to sugar-cane hike
The cabinet has decided on the final sugar-cane price for the 2016-17 milling year of 1,083.86 baht a tonne, higher than the initial cane price.
— Bangkok Post

Death sentence to Pattani blast defendants
The Pattani provincial court sentenced six men to death and four others to imprisonment in relation to a noodle shop explosion in the southern border province two years ago.
— Bangkok Post

Germany grants Bt690m, will work with Thailand on climate-change projects
GERMANY has granted Bt690 million for a four-year climate change programme intended to help Thailand achieve its goal of reducing greenhouse gas emissions and adapting to climate change
— The Nation

RID begins releasing water into 12 retention fields
The Royal Irrigation Department (RID) has started to draw water from the Chao Phraya River and direct into 12 empty fields for agricultural purpose in a bid to allow for an early start to the crop season.
— NNT

Egat aims for revamp to tackle disruption
The Electricity Generating Authority of Thailand (Egat) plans to revamp its organisational structure and administration to prepare for disruptive technology in the country’s energy sector.
— Bangkok Post

PRD moving toward 4.0 era with use of big data system
The Public Relations Department (PRD) is seeking to establish connectivity within its organization through the adoption of big data in accordance with the Thailand 4.0 policy.
— News Today (video)

Pattaya tour boat operators continue to use beachfront
Many boats have continued to use the beachfront area to pick up and drop off tourists despite being ordered to resume using Chon Buri’s Southern Pattaya Pier (Laem Balihai) from today (Tuesday).
— The Thaiger/ The Nation

Destination Properties sees GDP growth as platform for expansion
DESTINATION Properties Group, a hotel and restaurant developer, has revealed an aggressive investment plan for its food and beverage (F&B) outlets in Thailand that draws on the country’s sustained economic growth and the company’s own deep roots in the market.
— The Nation