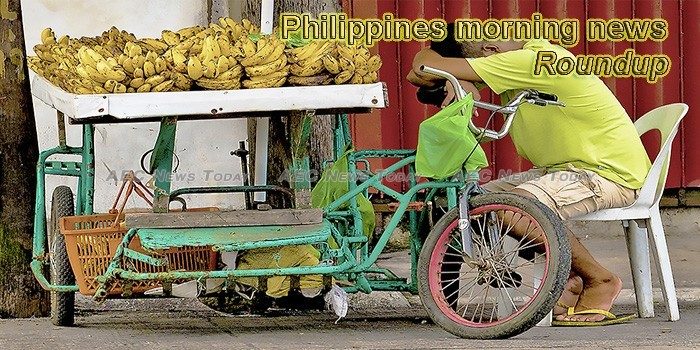 Foreign reserves rise to 28-month high of $82.9 billion
The gross international reserves climbed to $82.9 billion in February, the highest in 28 months, boosted by the inflows from the foreign exchange operations of the Bangko Sentral ng Pilipinas.
— Manilastandard.net

Senators nix last-minute changes in budget bill
CONCERNED senators said on Thursday the final version of the P3.7-trillion budget bill for 2019, having been “already ratified” by both chambers of Congress, can no longer be altered.
— Business Mirror

Dengue cases rising
WHILE public attention is focused on measles, the number of dengue cases is rising.
— Malaya

Growth to stay above 6% in Q1 on spending, slower inflation
THE BANGKO SENTRAL ng Pilipinas (BSP) expects economic growth to remain above six percent this quarter, with the view that strong government spending will prop up domestic activity despite budget delays and as inflation slows.
— BusinessWorld Online

March inflation seen at below 4%
THE Department of Finance (DOF) said inflation in March will remain below 4 percent if the average month-on-month (MoM) change in the prices of goods will not breach 0.6 percent.
— Business Mirror

Oil import bill jumps nearly 32% in 2018
THE COST of oil imports in 2018 hit $13.48 billion, up 31.8%, due to the combined effects of higher fuel prices and increased import volumes, the Department of Energy (DoE) said on Thursday.
— BusinessWorld Online

Require aliens to get work visa first before coming to PH: Bello
The government plans to require foreign nationals to secure working visas before coming to the country.
— Philippine News Agency

SSS plans actuarial study on second pension hike
The Social Security System (SSS) is planning to conduct an actuarial study next year to determine if it would be able to implement the second tranche of pension hike following the enactment of its new charter, a top official said.
— The Philippine Star

Duterte wants to cut COA red tape, simplify audit rules
After moving to speed up land conversion procedures, President Duterte now says he wants to meet with lawmakers, Office of the Ombudsman and Commission on Audit (COA) officials to simplify auditing rules and procedures in the government.
— Business Mirror

Beware of China ‘debt trap’, Malaysia’s Mahathir tells the Philippines
Malaysian Prime Minister Mahathir Mohamad cautioned the Philippines on Thursday (March 7) over falling into a “debt trap”, as the country banks on China to bolster growth.
— The Straits Times

Maynilad putting up P2-billion sewage plant
West Zone concessionaire Maynilad Water Services Inc. has started the construction of its P2.05-billion sewage treatment plant, expected to be its largest facility in terms of capacity.
— The Philippine Star

Mahathir: Malaysia to support peaceful Bangsamoro transition
Malaysian Prime Minister Mahathir Mohamad said that he looks forward to a peaceful Mindanao, as it could lead to the prosperity of both the Philippines and Malaysia.
— CNN Philippines

Philippines, Malaysia to ink health accord
The Philippines and Malaysia will soon to sign an agreement to boost health cooperation between the two Southeast Asian nations.
— Inquirer.net

MisOr school board earmarks P9-M to improve techvoc
The provincial school board of Misamis Oriental has allocated at least PHP9 million for the improvement of school facilities and equipment for technical, vocational, and livelihood (TVL) education.
— Philippine News Agency

Gov’t info on narcopoliticians should only serve as leads, not for publication –IBP lawyer
Integrated Bar of the Philippines (IBP) president Abdiel Dan Fajardo said on Thursday that the government’s information on supposed narcopoliticians in the country should primarily serve as leads for investigations, and not for the publication of a list of names without evidence.
— GMA News

Church asks investors to shun coal-fired power
THE CATHOLIC Church and other non-government organizations are calling on financial institutions to divest from coal-fired plants and focus on investing in renewable energy.
— BusinessWorld Online

Greenpeace: Air quality report highlights need for more air monitoring systems in Philippines
“The good ranking… is not a cause for celebration as [the country has the region’s] least average number of monitoring stations per city.”
— The Philippine Star

AboitizPower to enhance environment management program
The AboitizPower said it continues to pursue ways to enhance its environmental management and marine protection programs following the discovery of another sea turtle nest at the shoreline of the Therma South, Inc.
— Philippine News Agency

PLDT spending P78.4-B in capex this year
PLDT Inc. will be spending a total of PHP78.4 billion in capital expenditures (capex) this year to finance the expansion of its network and information communication technology capabilities.
— Philippine News Agency

Free transport services, museum admissions for women on March 8 –Commission on Women
The management of various public transport modes, museums, and agencies in the country announced that women may avail of free rides and services on March 8, 2019, in line with the celebration of the International Women’s Day.
— GMA News

DA Caraga braces for El Niño
To ease the effects of the El Niño phenomenon in the region, the Department of Agriculture (DA) in Caraga has allocated buffer stocks to assist farmers who will be affected by the weather phenomenon.
— Philippine Information Agency

Soccsksargen records 40 new measles cases
The Department of Health (DOH) in Region 12 (Soccsksargen) said the measles incidence in the region remain under control even as it recorded at least 40 new cases since last week.
— Philippine News Agency