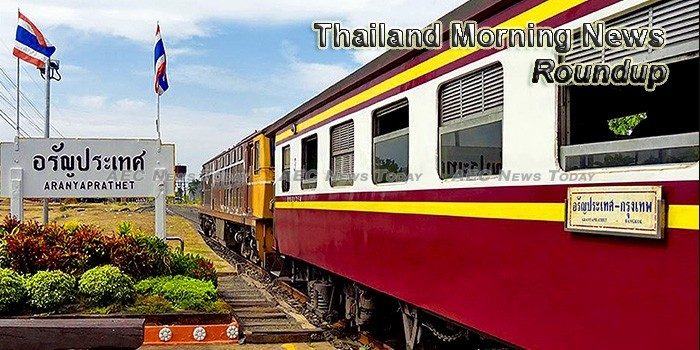 Thai economy to receive boost from mid-year state budget
The Joint Standing Committee on Commerce, Industry and Banking (JSCCIB) has indicated that the Thai economy will benefit from an influx of 150 billion baht from the mid-year government budget.
— NNT

Strong baht, higher wages may slow Thai 2018 export growth to 3.5 pct-shippers
Thailand’s exports may grow at a much slower pace of 3.5 percent this year due to a strong baht and higher wages, after expanding nearly 10 percent in 2017, a group of Thai shippers said on Tuesday.
— Reuters

Government asked to postpone wage hike for one year
The Thai National Shippers’ Council (TNSC) has called on the government to consider postponing the wage hike plan for a year, allowing businesses to have more time to adjust to the rising costs.
— NNT

ITD tycoon in crosshairs after arrest
Construction tycoon Premchai Karnasuta could face a maximum of 28 years in jail if he is found guilty of illegally poaching wildlife in the World Heritage Thungyai Naresuan sanctuary in Kanchanaburi province.
— Bangkok Post

SMEs fret over wage hikes, energy costs
Small and medium-sized enterprise (SME) optimism fell for the three months to March as firms worry that the imminent minimum wage hikes and rising energy costs will push up their operating costs, according…
— Bangkok Post

Deputy Education Minister meets on education reform for the EEC
The Deputy Minister for Education traveled to Rayong to meet with a committee handling reform of education in the eastern region to accommodate the Eastern Economic Corridor (EEC) with plans to have the effort reviewed by the Cabinet.
— NNT

Web watch targets 50 sites with South, ISIS links
Authorities are keeping a close watch on around 50 websites with alleged links to the Islamic State (IS) for possible connections with violence in the restive South, a senior police officer said Tuesday.
— Bangkok Post

US Navy sails in for Cobra Gold exercises
US Navy ships have arrived in Chon Buri’s Sattahip district for the 37th annual Cobra Gold military exercise which will kick off next week.
— Bangkok Post

Phuket airport GM addresses hours-long queues
Phuket International Airport General Manager Petch Chancharoen told The Phuket News today (Feb 6) that Airports of Thailand (AoT) are in the process of resolving long departure queues, which they say have been brought on due to a shortage of immigration officials, after claims from some passengers that they waited over three hours in queues yesterday (Feb 5).
— The Phuket News

Peace TV faces 15-day broadcast ban
The Thai media regulator has suspended the broadcasting licence of a TV station run by the red shirts. This is the fourth time the channel has been banned under the junta.
— Prachatai English

TAT aims to lure more Japanese visitors
The Tourism Authority of Thailand (TAT) is engaging the Japanese market through a series of activities and events, hoping to draw more than 1.6 million Japanese arrivals to Thailand this year.
— Bangkok Post