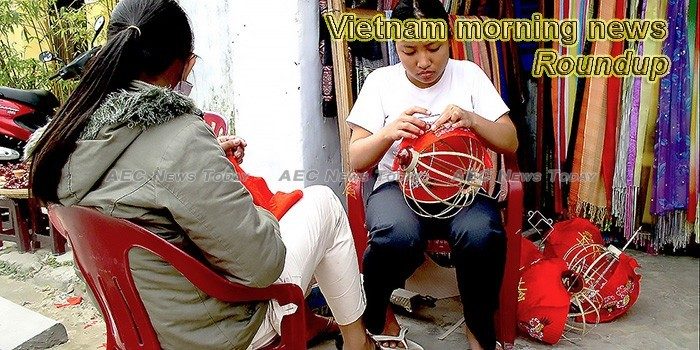 Vietnam firm starts building US$42.7 million solar power plant in Binh Thuan
Once completed, the plant is expected to supply around 80 million kWh of electricity for the national power grid annually.
— The Hanoi Times

Vietnam Gets First Female President, But Just For A Short While
Vietnam’s national assembly appointed Dang Thi Ngoc Thinh as interim president of the Socialist Republic of Vietnam after the death of President Tran Dai Quang on September 21. Thinh will hold office until the next special plenary session in which a new head of state will be elected. She thus becomes the first woman to assume the presidency of the country.
— Investvine

Vietnam targets $1 billion of seafood exports to ASEAN
The region has become increasingly important for Vietnam in the past 10 years.
— IntraFish

Vietcombank steps up divestments to meet cross-holding limit
Once completing both auctions, the lender will no longer be a major shareholder in Military Bank (MB) and Vietnam Export Import Commercial Bank (Eximbank).
— The Hanoi Times

Is Vietnam headed for another economic crisis?
Vietnam has endured an economic crisis every 10 years over the past 4 decades. While the country has enjoyed an enviable growth trajectory in the two decades since the 1997–1998 Asian financial crisis, consistently ranking among the world’s fastest-growing economies, local firms are increasingly accumulating risky loans to expand their businesses and private credit growth is significantly outpacing GDP growth.
— Focus Economics

New decree removes barriers for rice exporters
According to a new governmental decree, rice-exporting businesses will no longer be required to own rice storage, paddy milling and grinding facilities with processing capacities of 5,000 tonnes of rice and 10 tonnes of paddy per hour, respectively.
— VietnamPlus

Minister: Economic shake-up crucial for fulfilling socio-economic targets
Economic restructuring should be channelled more specifically to realise the socio-economic targets set by the National Assembly, not only for 2018 but also for the following years, said Minister of Planning and Investment Nguyen Chi Dung.
— VietnamPlus

Vietnam urged to use Hong Kong to extend international reach
Vietnamese firms can overcome their internal limitations by doing business in and with Hong Kong, experts say.
— VnExpress

Southeast Asia Capital Group Signs Contracts to Provide Copper to Vietnam
PHI Group, Inc. (www.phiglobal.com) (OTCQB: PHIL), a U.S. diversified holding company focused on mergers and acquisitions and investments in select industries and special situations, today announced that Southeast Asia Capital Group, Inc., (“SEA Capital Group”) a Nevada company established in 2004 and engaged in finance, international trade and project investment, has signed a contract with a Vietnam-based company to provide 5,000 MT of copper sheets per month to Vietnam for the next twelve months after the initial trial shipment of 3,000 MT.
— Global Newswire

British Council in Vietnam announces launch of IELTS on computer
IELTS, the world’s most popular English test for higher education and migration can now be taken on a computer from 9 October 2018 onwards.
— AEC News Today/ PR Newswires (media release)

On the hunt for Vietnam’s best banh mi
Walking through Hoi An’s Old Town, in central Vietnam, the omnipresent buzz of motorbikes fills the air.
— CNN

Vietnam Has First Female President, But Activists Unimpressed
Vietnam’s appointment of its first female president belies a deep gender imbalance in the communist country’s politics and society and will do little to improve women’s rights, advocates said Monday.
— VOA

Vietnam urged to use Hong Kong to extend international reach
Vietnamese firms can overcome their internal limitations by doing business in and with Hong Kong, experts say.
— VnExpress

Vietnam cafe is ankle deep with water and fish
Who needs a cat cafe when you can have fish? At this coffee shop in Vietnam, you can sip on a cup of joe while fish swim around your feet.
— USA TODAY (video)

Hospitality sector will further develop: executives
With its still huge untapped potential, the Vietnamese hospitality market has become a hot destination for many local and foreign investors. Viet Nam News reporters Thu Ngan and Vu Hoa spoke with experts from consultancy and companies to ask about the potential of the market, foreign investment flows and how to develop it further.
— Bizhub

Coats expands its Vietnam presence
Coats, a leading industrial thread manufacturer, has unveiled the latest expansion to its global operations with the opening of a new development in Vietnam. The extension to its site in Hung Yen, near Hanoi, was formally opened by Rajiv Sharma, Group Chief Executive, at a ceremony on 21 September.
— Knitting Industry

Nutifood joins hands with Swedish partner to boost export
The Vietnam Nutrition Food JSC (NutiFood) and Swedish Backahill Company have joined hands to boost export of Vietnamese dairy and organic nutrition products to European and Asian markets under a Memorandum of Understanding (MoU) inked between the two sides on September 11.
— VietnamPlus