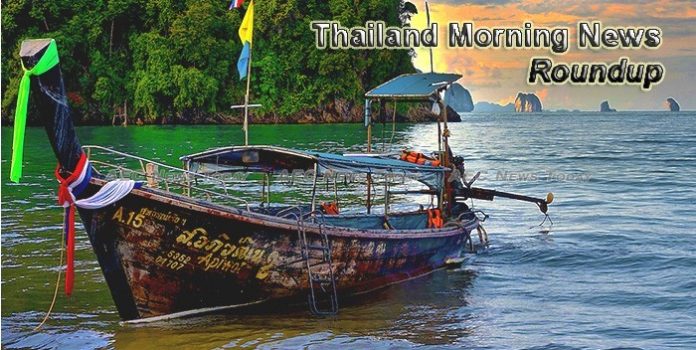 Phuket beachfront businesses at Layan, Leypang ordered: ‘Get out, or be demolished’
Vendors who do not vacate the beachfront plots they occupy at Layan and Leypang on Phuket’s west coast in defiance of a Supreme Court judgement face having their businesses demolished after March 5.
The Phuket News

BOT digs in against digital currencies
THE BANK of Thailand (BOT) is pressing the country’s financial institutions to steer clear of involvement in transactions that relate to cryptocurrencies.
— The Nation

Gen Prawit asks NACC for one more week to clarify about his wristwatches
Deputy Prime Minister Prawit Wongsuwon has asked for another week to clarify to the National Anti-Corruption Commission (NACC) about the sources of his expensive wristwatches and a diamond ring.
— Thai PBS

MiFID II limits smaller firms
Many small and mid-cap listed firms will experience difficulty in meeting foreign investors through roadshow events once the Markets in Financial Instruments Directive II (MiFID II) comes into effect, due to the use of investors’ preference selection.
— Bangkok Post

Six locals a day get HIV, says City Hall
More than 2,000 people in Bangkok are new HIV infected person each year, or around six people a day, according to City Hall’s Health Department.
— Bangkok Post

KBank expands K Plus app offerings
Kasikornbank (KBank) has launched an e-commerce platform on its mobile banking app, K Plus, in a move to broaden services and fend off banking competition from platform giants.
— Bangkok Post

Construction of Phuket ‘eyesore residences’ halted again as officials deem land claim illegal
Construction of the luxury residence at Krathing Cape, overlooking Nai Harn Bay on Phuket’s southwest coast, has been ordered to stop following an inspection yesterday (Feb 12) that deemed the site to be on protected forest land.
— The Phuket News

Thailand demonstrators in hunger strike to protest coal power plants
In Thailand, protesters are staging a hunger strike outside the United Nations headquarters in Bangkok. Their demands are for the government to shut down two coal-fired power plant projects.
— Channel NewsAsia (video)