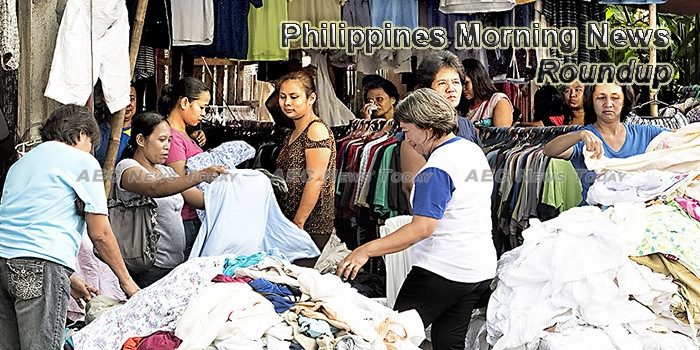 ADB: 7 PH cities most vulnerable to flooding
Typhoons and flooding as a result of climate change will damage more houses in the Philippines by 2085 as seven cities are seen vulnerable to the rise in sea levels, the Asian Development Bank (ADB) said on Friday.
— Philippine Daily Inquirer

PH eyes bilateral FTA with US
After going through the failed proposal for sectoral free trade agreement (FTA) with the US and other forms of useless exercise to further open up access for Philippine goods in the world’s largest market, the Philippines is now eyeing the possibility of forging a comprehensive bilateral FTA with the US.
— Manila Bulletin

CA junks Marcos victims’ claim for $2-B damages
Over 10,000 human rights victims during the regime of president Ferdinand Marcos have lost a bid to collect nearly $2 billion in damages from the dictator’s family.
— The Philippine Star

CEZA remitted P1.42B to nat’l treasury since ‘05
The Cagayan Economic Zone Authority (CEZA) has remitted more than P1.427 billion to government coffers since it started earning in 2005.
— The Manila Times

Competition watchdog to start imposing sanctions
THE PHILIPPINE Competition Commission will impose starting Aug. 9 penalties on entities found violating Republic Act No. 10667, or the Philippine Competition Act, after the two-year transitory period under that law will have lapsed by then.
— BusinessWorld Online

Philippines rising
One year under the Duterte administration, the Philippines appears to be continuing the economy’s upward momentum. It has registered GDP growth for more than 70 consecutive quarters since 1998.
— Manila Bulletin

House to probe Del Monte’s P29-B tax liability
Speaker Pantaleon Alvarez vowed to leave no stone unturned when the House of Representatives investigates reports that the Bureau of Internal Revenue (BIR) allowed a multinational company to get away with its supposed P29-billion tax liability.
— The Philippine Star

LTFRB to impound Uber, Grab cars lacking franchise
Before the end of the month, the Land Transportation Franchising and Regulatory Board (LTFRB) will start apprehending drivers accredited by ride-hailing companies and impound their cars if they continue to operate as public conveyances without franchises.
— Philippine Daily Inquirer

2018 budget for OP slashed
THE PROPOSED budget for the Office of the President (OP) has been slashed in the proposed expenditure program next year, Budget Secretary Benjamin E. Diokno said in an interview at Malacañang on Thursday, July 13.
— BusinessWorld Online

Farm output likely grew 5% in Q2 — Agri chief
FARM OUTPUT growth for the second quarter likely matched the first quarter’s pace to remain supportive of the economy during the period, the country’s agriculture chief said over the weekend.
— BusinessWorld Online

Gov’t spends P78.4 B to settle debt in May
The government spent P78.39 billion in May to settle its liabilities, data from the Bureau of the Treasury (BTr) showed.
— The Philippine Star

NEDA pushes nat’l ID system, end to ‘endo’
A committee under a legislative-executive advisory council has identified 13 priority bills as urgent, including a national identification system, the Traffic Crisis Act and a measure prohibiting labor-only contracting schemes, the National Economic and Development Authority (NEDA) said over the weekend.
— The Manila Times

PHL meat imports down 16.33% in Jan-May
Philippine meat imports in January to May declined by 16.33 percent as local traders were discouraged from buying more expensive meat products from abroad.
— Business Mirror

BOI investment pledges hit P273-B in mid-July ‘17
The Board of Investments (BOI), the country’s leading investment promotion agency (IPA), has approved a total of PHP272.7 billion from January to mid-July 2017.
— Philippine News Agency

Sea ruling now global law, inspite of Beijing
Despite Beijing’s attempts to undermine it, the UN maritime ruling favoring the Philippines already is part of world law. Manila tactfully must defend it and lead other lands in that effort, for Filipino and global interest.
— The Philippine Star

LEDAC lists 13 bills as ‘urgent’
THE CORE committee of the Legislative-Executive Development Advisory Council (LEDAC) has endorsed 13 bills — including a tariff on rice imports to replace the quota system — as legislative measures needing the certification by President Rodrigo R. Duterte as “urgent” such that they should be passed in the next five months.
— BusinessWorld Online

Gov’t to abolish HGC
The Duterte administration is looking to abolish the Home Guaranty Corp. (HGC), similar to its action on the Quedan and Rural Credit Guarantee Corp. (Quedancor).
— The Philippine Star

Indonesia morning news for May 26