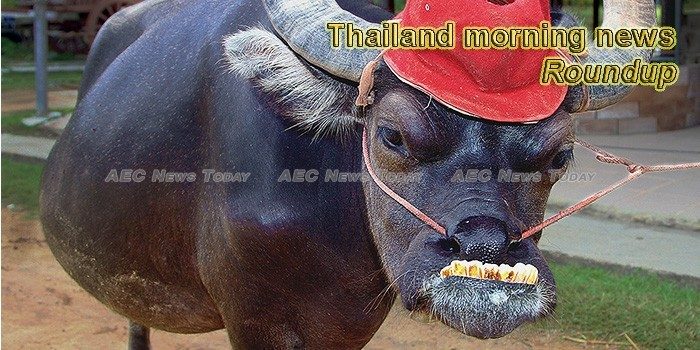 Private sector fears trade war hit on exports next year
THE nation’s peak private-sector advisory grouping has voiced fears that the escalating trade conflict between the United States and China could harm the export sector – a standout performer in the Thai economy – next year.
— The Nation

Thailand braces for floods, residents lay bricks, sandbags
Businesses in Thailand’s southwestern Petchaburi province blocked doors with sandbags and bricks against possible flooding on Tuesday as heavy rains threatened to cause a dam to overflow.
— Reuters

Thailand Decision Guide: Laying the Groundwork for a Rate Hike
The Bank of Thailand is moving closer toward raising near-record low interest rates as officials try to create some policy space for the next downturn.
— Bloomberg

Corruption watchdog faults 4 ex-officials of malfeasance related to temple fund fraud
Four former senior officials of the National Office of Buddhism (NOB) have been faulted by the National Anti-Corruption Commission (NACC) for malfeasance in office and disciplinary violations in connection with allocation of fund for temple repairs and renovation totaling six million baht.
— Thai PBS

BMW expanding EV assembly
BMW Group Thailand is ready to expand local assembly of electric vehicles (EVs) after the German carmaker was granted investment privileges by the Board of Investment (BoI) on July 25.
— Bangkok Post

Corporate giants jockey to form alliances for high-speed rail bid
SOME of the country’s biggest companies are manoeuvring to team up for joint bids on a proposed high-speed train project linking three international airports.
— The Nation

PM orders formation of R&D ministry
Prime Minister Prayut Chan-o-cha yesterday ordered the creation of a new ministry overseeing R&D and innovation, to be established before the next election.
— Bangkok Post

Vietnam, Thailand strengthen political and security cooperation
Minister of Public Security, Sen. Lieut. Gen. To Lam, hosted a reception in Hanoi on August 6 for Secretary-General of the National Security Council (NSC) of Thailand Gen. Wanlop Rugsanaoh, who is also head of the Vietnam-Thailand Joint Working Group (JWG) on politics and security.
— Nhan Dhan

DSI mulls reopening B30m fraud case
A group of 10 people from Phayao petitioned the Department of Special Investigation (DSI) on Tuesday asking it to reopen an investigation into a fraud case as a lower court ruling has not been honoured and damages not paid.
— Bangkok Post

Lecturer, probation official among alleged paedophiles
Eight suspects, including a well-known university lecturer and a probation official, have been arrested for buying online sex services from underage boys, but senior figures asked that their names not…
— Bangkok Post

RapidzPay gears up by expanding payment system
RapidzPay is partnering with Payment Platform Solution, an approved MasterCard company, improving the system by using RapidzPOS to introduce a new payment solution for first time in Thailand.
— The Nation

PM alters itinerary to support Petchaburi flood measures
The Prime Minister has decided to change his itinerary for August 8 due to concern over the water situation in Petchaburi province, diverting plans to meet with authorities and citizens there.
— News Today (video)

EC organizes training to prepare for election
The Election Commission of Thailand has organized a training session to help its staff get ready for the upcoming general election.
— News Today (video)

TBA: Transfer glitch refunds shortened to 1 day
The Thai Bankers’ Association (TBA) has agreed to shorten the period for unmatched fund transfer returns in the event of mobile app glitches to one day from a few days.
— Bangkok Post

Commerce Min forms sub-committees to increase trade competitiveness
Commerce Minister Sontirat Sontijirawong has held a meeting with representatives of the Federation of Thai Industries (FTI) and related agencies to look for ways to shield Thailand from the impact of a global trade war.
— NNT

Thai-Myanmar border commerce to double by 2026
The value of border trade between Thailand and Myanmar is expected to double to UScopy2 billion by 2026, says the assistant spokesman of the Prime Minister’s Office.
— Bangkok Post

NCH to expand under EEC
NCH Thailand has budgeted UScopy million (33.2 million baht) for 2019 to expand its chemical plant in Chachoengsao province after seeing an uptick in demand from industrial plants because of the government’s flagship Eastern Economic Corridor (EEC) scheme.
— Bangkok Post

Japanese laud local business environment
Japanese companies operating in Thailand are upbeat about the business climate because of the recovery in the automobile sector and its spillover effects to other sectors, with a key diffusion index or the second half of 2018 reaching the highest level in six years.
— Bangkok Post

Parts retailer Burson sets up Thai shop to fill market void
Burson, a leading Australian auto parts supplier, is to open its first store outside Australia in Bangkok, in partnership with the Sammitr Group.
— Bangkok Post

Government launches competition to help turn fashion designers into entrepreneurs
The Department of Industrial Promotion and Institute for Small and Medium Enterprises Development have collaborated to develop Thai fashion designers by arranging a competition under the Thailand Creative Economy project.
— News Today (vdeo)

Chiang Rai to open chemical-free vegetable and fruit market in 2019
Chiang Rai province is set to open the largest market for fresh fruit and vegetables in the upper part of the northern Thailand next year.
— NNT

Over 300 Bangkok markets given certificates of cleanliness
In an effort to upgrade the quality of markets across the capital, the Bangkok Metropolitan Administration (BMA) has awarded over 300 markets throughout the city with Premium Market and Hygienic Market certificates.
— NNT

Expedia vows hotel discounts for users of newest service
Expedia Group, the operator of the travel booking website, has announced plans to further penetrate the Thai market with the launch of a new booking solution that promises to help travellers save money on hotel rooms.
— Bangkok Post