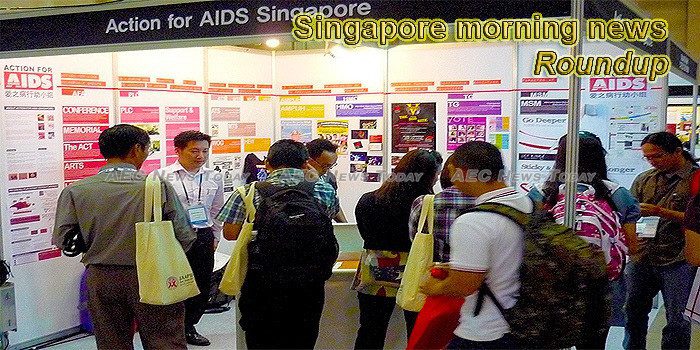 Bilateral trade between Singapore and Shanghai climbed 33.8% to $24.11b in 2017
Shanghai firms invested about $8.27b in Singapore as of end 2017. Singapore’s bilateral trade with Shanghai jumped 33.8% YoY to $24.11b US$17.5b in 2017, Monetary Authority of Singapore (MAS) deputy managing director Jacqueline Loh revealed.
— Singapore Business Review

State Courts plugs electronic loophole that allowed access to case files
THE Singapore State Courts has identified and fixed a vulnerability in its electronic case management system used in conducting criminal proceedings, which has allowed a few accused persons to gain unauthorised access to more than 200 e-case files, it said in a media statement on Wednesday.
— The Business Times

3 Singapore MPs grill Facebook senior exec on fake news at international hearing
Senior Minister of State for Law and Health Edwin Tong, taking part in a first-of-its-kind international hearing on fake news and disinformation in London, questioned a senior Facebook executive as to why his company initially refused to take down a hate post in Sri Lanka during a period of religious violence and anti-Muslim riots in March.
— Asia One

Ex-PUB staff cheated Govt water agency into awarding 718 contracts worth nearly $2 million to his wife’s companies over 7 years
A former Public Utilities Board (PUB) Technical Officer was sentenced to 3 years and 9 months jail yesterday after he was convicted for abusing his position within the Government’s water agency and cheated the board into awarding a hefty 718 contracts worth $1.9 million to companies registered under his wife’s name over a period of seven years.
— The Independent

In the works: Enhanced protection against sexual violence, harassment for singles
Singles in intimate partner relationships may soon find it easier to apply for protection orders against their abusive partners, Law and Home Affairs Minister K Shanmugam said, as the Ministry of Law works towards enhancing the Protection from Harassment Act (Poha) next year for unmarried and married individuals.
— Today Online

Go-Jek’s going places, but is it leaving its riders behind?
The Singapore-bound ride-hailing provider is Indonesia’s most valuable technology start-up, last valued at about US$5 billion, so why do some of its motorcycle riders claim that they’re struggling?
— Channel News Asia

SkillsFuture fraud: First syndicate member who stashed S$6.6 million in cash, 11kg of gold at home sentenced
The first of five individuals in a syndicate behind what is believed to be the largest defraudment of a public institution was sentenced to five years and eight months’ jail on Tuesday (Nov 27).
— Today Online

US-China trade war a tussle for global dominance: Panel
To see the ongoing tensions between the United States and China as merely a trade war would be to miss the point. It is, in fact, a tussle for dominance on the global stage, speakers at The Straits Times Global Outlook Forum said yesterday.
— Straits Times

Vietnam overtakes Singapore in IPO fund market
Singapore fell short of Vietnam’s initial public offerings (IPOs) making up more than half or $6.2b of the total $12b raised across Southeast Asia, according to professional services firm Deloitte.
— Singapore Business Review

EDB eyes investments in tech, ICT, healthcare
AS a Singapore-based investor, self-proclaimed to be “Singapore-first” and to have a “unique” position in the venture capital and private equity community, EDBI has identified deep tech, ICT (information and communications technology) and healthcare as industries to watch.
— The Business Times

EY’s audits on Noble unit under review
THE audits conducted by accountants from the Singapore arm of EY on a subsidiary of commodity trader Noble Group for five financial years from 2012 to 2016 have come under review in a criminal probe.
— The Business Times

Complaints against banks and insurers climb: FIDReC
THE number of complaints filed with Singapore-based Financial Industry Disputes Resolutions Centre (FIDReC) rose to 1,266 for the financial year ended June 30, 2018, up from 953 the year before.
— The Business Times

Ex-director of NTU subsidiary charged with cheating
The former director of an innovation and enterprise company under Nanyang Technological University (NTU) was on Wednesday (Nov 28) accused of cheating organisations, including his then- employer, of $225,000.
— Straits Times

Lawyer struck off the rolls over role in PIC scam
A lawyer who was convicted for his role in trying to defraud the government by abusing the Productivity and Innovation Credit scheme was on Wednesday (28 November) struck off the rolls by the Court of Three Judges.
— Yahoo News

Hot hires in 2019: Professionals changing jobs can expect a 7-15% pay rise
Professionals can expect an average pay increment of 7 to 15 per cent when switching employers next year, and workers with strong industry expertise and the relevant digital skills will remain highly sought after.
— Today Online

Safety, security key to a nation’s well-being and prosperity
Despite all we hear and see, there is some very good news – global prosperity is at its highest level ever. The Legatum Prosperity Index tracks prosperity in 149 countries and we see prosperity continuing to rise in the world, both over the last year and over the last 11 years. More countries are becoming prosperous and more people are living more prosperous lives. This is to be celebrated.
— The Business Times

Coming soon: A one-stop app for HDB residents
Residents will soon have a mobile device application that allows them to make appointments with banks or clinics in Housing Board estates or apply to use public spaces such as void decks. It will even prompt them when shops nearby are having promotions.
— Straits Times

Making sure that the nation’s taps do not run dry
More than 50 years ago, Singapore had to undergo water rationing when there was a prolonged dry spell.
— Straits Times

Ascendas Hospitality Trust acquires 2nd Seoul hotel for $95 mil
Ascendas Hospitality Trust (A-HTRUST) is acquiring Ibis Ambassador Seoul Insadong for KRW77.5 billion ($94.5 million). Completed in 2013, the 363-room hotel is located near Jung-gu, one of the major business districts in Seoul. The hotel also has a restaurant, a bar, two meeting rooms, a gym, a sauna, as well as 24 carpark spaces.
— The Edge

South Africa Mulls Singapore as Reference for Basic Fuel Price
South Africa’s Department of Energy proposed changes to the structure of the nation’s basic fuel price as it seeks to reduce the cost of gasoline and diesel.
— Bloomberg

Should You Sell Your Shares When The Market Falls, And Buy Them Back Later When The Market Recovers?
We can quickly lose substantial amounts of our money when the stock market crashes. For example, during the Great Financial Crisis (GFC) in 2008 and 2009, the Straits Times Index (SGX: ^STI), Singapore’s stock market benchmark, plummeted by more than 50%. By incurring a 50% loss on a stock, we would need a gain of 100% just to break-even. Even if we were to lose “just” 25%, we still require the stock to gain 33% to recover our loss.
— Motley Fool sg

In Singapore–low fertility rates, but booming baby businesses
Singapore’s birth rates are at an all-time low, with only 39,615 recorded births last year. This figure is the lowest its been in the last seven years, and the country’s fertility rate, currently at 1.16 is lower than the necessary percentage of 2.1 in order for the population to remain stable. Read related: Decline in number […]
— The Independent sg

Citation for the winners
While much of Asia has been fixated on geostrategic issues for most of the year, many in the region have tended to overlook the significance of the threat posed by disasters. Like blows to the back of the head, they have often surprised us, stunning in their savagery.
— Straits Times

Netizens slam Financial Times journalist for indicating Singapore is inflexible
A Financial Times journalist has been criticised online after she wrote that the “impeccable planning and a reverence for rules” in Singapore “leave little room for spontaneity or mental elasticity” and shared an example of being refused three scoops of ice cream at a local shop to illustrate this point.
— The Independent