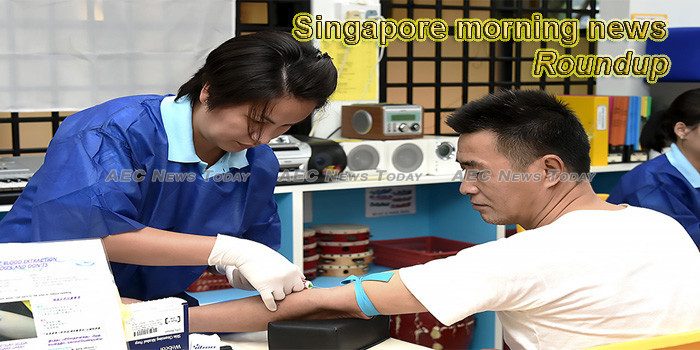 China-backed RCEP trade pact in ‘final stage,’ deal eyed in 2019: Singapore
Negotiations for a major China-backed trade agreement have moved to a final stage and Southeast Asian states involved in the talks are determined to wrap up the deal in 2019, Singapore, current chair of the 10-nation group, said on Wednesday.
— Reuters

Asean fintechs attracted 25% more funding this year: report
Fintech firms based in Singapore attracted 25 per cent more funding in the first 10 months of 2018 over the funding captured in the full year of 2017, with the US$222 million of funding taken up so far making up nearly half of the funding earmarked for fintech within Asean.
— The Business Times

Not born here, but completed national service like every Singaporean son
National service (NS) is often viewed as a rite of passage for all males born here but full-time enlistment in Singapore also comprises thousands of foreign-born men.
— Straits Times

Zipping through MRT fare gate in a wheelchair
Ten-year-old Parry Tan getting a first-hand experience of how wheelchair users can use hands-free MRT station fare gates yesterday.
— Straits Times

Cut cables disrupt fibre broadband in eastern Singapore
Fibre broadband was disrupted in the eastern part of Singapore yesterday, affecting about 10,000 customers and some might get their services back only today.
— Straits Times

New system to speed up legal aid for the needy from next year
Poor people in need of legal aid may soon get help more quickly.
— Straits Times

China, Singapore agree to deepen ties in various areas
Singapore-China relations have been progressive, forward-looking and strategic, and leaders from both countries have committed to working closer together in a wide range of areas, from science and technology to trade and culture.
— Straits Times

AMKTC bribery trial: Partner had ‘misgivings’ about company’s morals
A company director being tried for bribery became furious when his business partner wanted to withdraw his shares from their firm, and allegedly wanted to report him to the authorities.
— The New Paper

Analogue TV will go off air in less than 50 days
With under 50 days to go until analogue TV signals are turned off, most Singapore households have switched to digital TV – though around a fifth have still yet to do so.
— Straits Times

Teenager scams S$14,000 from Carousell users by pretending to sell tickets to Universal Studios, Bruno Mars concert
A 19-year-old teen has been arrested for allegedly cheating Carousell users of some S$14,000.
— Today Singapore

Paedophile admits sexually assaulting 2 sisters after luring them to his flat
Posing as a Housing Board officer, a 52-year-old paedophile and career criminal tricked a 16-year-old neighbour to his flat, where he sexually assaulted her and recorded the abuse on his mobile phone.
— Straits Times

Employers rank NUS grads No. 10 in global poll
Graduates from the National University of Singapore (NUS) are among the most employable in the world, a global survey of recruiters published today has confirmed.
— Straits Times

Singapore courts stick to rule of law: Chief Justice Sundaresh Menon
Singapore courts, unlike United States courts, are “leery” of going outside the text of the Singapore Constitution in declaring unspecified rights, as it is dissimilar to the US Constitution, which preserves rights not specified in text.
— Straits Times

Vegetarian food stall in Shenton Way gives discreet 50% discount to workers in cleaning staff uniform
Here’s a nifty, discreet way to do some good without drawing too much attention to the cause:
— Mothership

Singapore family businesses upbeat on growth but need better succession plans: PwC
WHILE family businesses in Singapore are optimistic about growth and are keen to keep the business in the family, few have a robust succession plan in place compared to their global counterparts, according to the Global Family Business Survey 2018 released on Wednesday by professional services firm PwC.
— The Business Times

Cyber security not just a ‘technical issue’ for IT personnel to handle: CSA CEO
Cyber security should be viewed like the brakes of a car, in that one could “go fast” if one had “good brakes”, said the chief executive officer of the Cyber Security Agency of Singapore (CSA) on Wednesday (Nov 14).
— Today online

Australia’s Belles Hot Chicken pops up in Singapore on Nov 17 and 18
The letters G, B and D are everything to chef Morgan McGlone. Together, they stand for Golden Brown Delicious, what the 44-year-old works hard to achieve in Belles Hot Chicken, his chain of seven fried chicken shops in Sydney and Melbourne
— The Business Times

Singapore Airlines has hard time persuading people to fly economy on world’s longest flight
Singapore Airlines is facing no problem selling business-class tickets on its ultra-long nonstop flights to the United States but is having to price premium economy seats very attractively, a senior executive said on Wednesday.
— Business Insider

CSA chief: IHiS’ IT processes need review
Cyber security should be viewed not as a technical issue but a management issue handled at senior levels, stressed Singapore’s Commissioner of Cybersecurity.
— The New Paper

Drink-driver jailed 10 months for killing woman in crash
Man who killed rag-and-bone collector had been drinking for 9 hours before crash.
— The New Paper