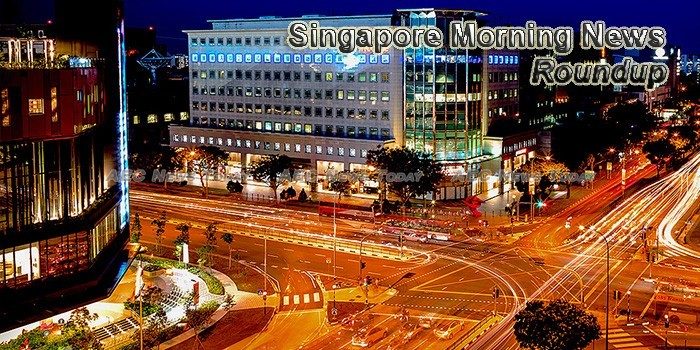 Singapore needs to go beyond tax perks and develop new trump cards, says Heng
SINGAPORE needs to develop its competitive advantages beyond tax incentives, given the trend of lower tax rates around the world, said Minister for Finance Heng Swee Keat in Parliament on Monday.
— The Business Times

New law to strengthen public sector governance passed
A new law that looks to strengthen the governance of statutory boards as well as formally introducing a data sharing regime in the Singapore Government was passed in Parliament on Monday (Jan 8).
— Channel NewsAsia (video)

Police seize S$3.05 million, 12,000-tonne tanker in operation against fuel syndicate
A syndicate suspected of stealing fuel from Shell Bukom has been arrested by the police in an island-wide operation.
— Today Online

Singaporean filmed beating dog in viral video fined RM8,000
A Singaporean in Malaysia was fined RM8,000 (S$2,700) in default of eight months’ jail for an act of animal cruelty on Monday (Jan 8).
— Asia One

Local tech start-ups can carve niche in China: IE Singapore
As tech giants like Google and Uber can attest, China is a brutal place for global start-ups, but it could be a promising one for ambitious Singapore firms, said IE Singapore.
— The Straits Times (paywall)

Singapore’s sagas subvert public perceptions of leadership
For a nation that prides itself on efficiency and strong leadership, Singapore had an unusual 2017 as both qualities were tested.
— East Asia Forum

Keppel O&M graft case: Global resolution achieved more than what S’pore alone could, says Indranee
THE global resolution that Keppel Corporation’s rig-building unit reached with the authorities across three countries over a corruption scandal achieved more than what the Singapore government would have been able to attain if it had prosecuted the company solely under Singapore laws, Senior Minister of State for Law Indranee Rajah said in Parliament on Monday.
— The Business Times

MAS puts more scrutiny on bank loans for property development
A SPATE of aggressive land deals by developers last year has prompted the Singapore central bank to take a closer look at the way banks are financing development projects.
— The Business Times

Why Asean is good for Singapore
Singaporeans should be more positive about the regional grouping, given the many benefits it offers – not just its huge market potential but also the less immediately obvious ones like peace, without which economic growth would be impossible
— The Straits Times (paywall)

Singapore seeks assistance to move ‘as expeditiously as possible’ on Keppel O&M case: Indranee
The Government’s intention is to move as “expeditiously as possible” on investigations relating to Keppel Offshore & Marine (Keppel O&M) and the Attorney-General’s Chambers (AGC) has sought assistance for evidence from authorities in other jurisdictions, said Senior Minister of State for Finance and Law Indranee Rajah in Parliament on Monday (Jan 8).
— Channel NewsAsia