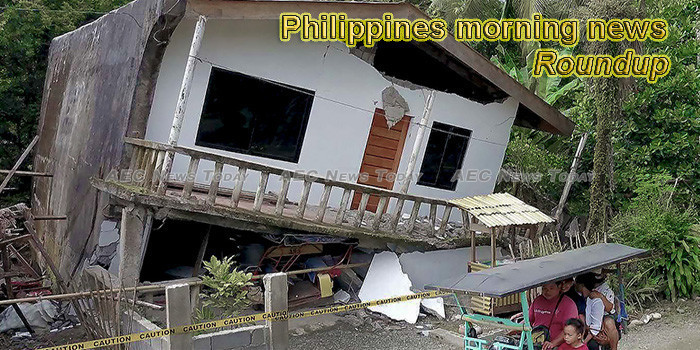 Duterte calls on Western countries to cease from dumping trash in Asia
Western countries should stop making developing countries as dumping ground for their garbage, including those labeled for recycling, President Duterte declared Monday.
— Manila Bulletin

Duterte back in PHL from 35th ASEAN Summit
President Rodrigo Duterte returned to the country Monday night after attending the 35th ASEAN Summit in Thailand, according to a report by Ralph Obina for Super radyo dzBB.
— GMA Network

‘Nothing new’ in Chinese warship shooing away Filipino-manned vessel from Panatag Shoal –Cayetano
Although not necessarily agreeing to the act, Speaker Alan Peter Cayetano on Monday said there is nothing new with a Chinese naval warship telling a Filipino-manned Greek-owned vessel to veer away from the Panatag Shoal in the West Philippine Sea.
— GMA Network

Government outstanding debt rises 10.4% at end-Sept.
THE Department of Finance (DoF) said it is studying proposals to tax salty food as a health measure, including the practicalities of such a scheme and its possible impact on inflation.
— BusinessWorld

No pork, no corruption in 2020 budget bill, House leaders assure Lacson
Speaker Alan Peter Cayetano assured Senator Panfilo Lacson and the public that even in their deliberations in the bicameral conference committee, there will be no parked funds, no pork and no corruption in the 2020 national budget.
— GMA Network

DA to release ASF zoning plan
The Department of Agriculture will soon release an African Swine Fever zoning plan as an added measure to stop the spread of the hog disease.
— GMA Network

Locsin refuses to call out China ship harassment in West Philippine Sea
Foreign Secretary Teodoro Teddyboy Locsin Jr refused to call out China over its harassment of a Filipino-crewed commercial ship near Scarborough Shoal (Panatag Shoal) in the West Philippine Sea, saying that doing so would compromise the employment of thousands of seafarers.
— Rappler

GOCC subsidies rise 3-fold in September
The national government extended P54.7 billion in subsidies to state-owned corporations last September, bulk of which went to Philippine Health Insurance Corp. (PhilHealth) to support of its health insurance program, data from the Bureau of the Treasury (BTr) showed.
— The Philippine Star

Manila urges closer tie-up against China
The Secretary of the Philippines’ Presidential Communications Operations Office (PCOO), Martin Andanar, urged Asean to increase its cooperation against China’s growing assertiveness in the South China Sea and ramp up counter-terrorism efforts against the Islamic State (IS) group within the region.
— Bangkok Post

DoF’s Dominguez sees 2019 GDP at low end of 6-7% target range
FINANCE Secretary Carlos G. Dominguez III said economic growth in 2019 will come in at the lower end of the government’s target range of 6-7%, ahead of the third quarter GDP announcement this week.
— BusinessWorld

Roadmap supporting natural capital accounting developed: NEDA
The country has developed an institutionalization roadmap for management of natural resources that contribute to development, as the economy is in sharp upward trajectory of growth.
— Philippine News Agency

Noisy tailpipes banned in Pasay, mayor reiterates
Pasay City has ordered that noisy tailpipes—those that are intentionally made or altered to emit a loud sound—are not allowed on motor vehicles, both private and for public transport, plying the streets of the city.
— Manilastandard.net

BSP to review regulation on sustainable finance
To address the threats of climate change head on, the Bangko Sentral ng Pilipinas (BSP) is set to review the groundwork for an environmentally sustainable financial system before the end of the year.
— Manila Bulletin

DA, Pampanga hand out P7.7 million in loans to 500 local rice farmers
About 500 farmers from two cities and three towns of Pampanga have received cash cards with P15,000 each under the Department of Agriculture’s Expanded Survival and Recovery Assistance Program for Rice Farmers.
— Manilastandard.net

Senate sets target for 2020 budget OK
SENATE plenary deliberation on the proposed P4.1-trillion national budget for 2020 will begin on Nov. 11 as the chamber eyes bicameral approval by the first week of December, Senate leaders said on Monday.
— BusinessWorld

PLDT gets $1M training grant from USTDA
The US Trade and Development Agency (USTDA) is supporting PLDT, Inc.’s preparations for the rollout of its fifth generation (5G) network by providing the telecommunications giant with a $1-million (around P50.5 million) training grant.
— BusinessWorld

Salty food next on tax authorities’ radar
THE Department of Finance (DoF) said it is studying proposals to tax salty food as a health measure, including the practicalities of such a scheme and its possible impact on inflation.
— BusinessWorld

With masterplan, Davao hopes to avoid pitfalls of rapid urbanization
AN URBAN planner wants to transform Mindanao into the “front door” of the Philippines, beginning with the development of the Davao Region.
— BusinessWorld

Parked funds the new pork? Lacson asks DBM to explain outlays sans purpose
Senator Panfilo Lacson on Monday said that he would ask the Department of Budget and Management to explain the parked funds worth over P20 billion in the proposed P4.1-trillion national budget for 2020 it submitted to Congress.
— GMA Network

Comelec not surprised by postponement of barangay, SK polls
The House of Representatives on Monday approved on third and final reading a bill postponing the May 2020 Barangay and Sangguniang Kabataan elections, a move that did not surprise the Commission on Elections (Comelec).”This does not come as a surprise.
— Philippine News Agency

Labor officer gunned down in Manila
THE Department of Labor and Employment condemned the killing on Monday of a labor officer in Manila. Unidentified gunmen opened fire on the car being driven by Ellen Dacanay late Monday afternoon.
— Manila Times

Good governance seal elates poor Eastern Samar town
Receiving the Seal of Good Local Governance (SGLG) from the Department of the Interior and Local Government (DILG) is motivating a poverty-stricken and rural town in Eastern Samar to improve its delivery of basic services.
— Philippine News Agency

New anti-drug agency? Aquino says why not just modernize PDEA, DDB
Philippine Drug Enforcement Agency Director General Aaron Aquino is more in favor of the government modernizing the agency and the Dangerous Drugs Board instead of a new body meant to curb the drug menace.
— GMA Network

Greece shouldn’t be deprived of protecting its own ship: Palace
Malacañang insisted that the government of Greece and not the Philippines should take a stand on the incident involving a Greek oil tanker with an all-Filipino crew allegedly harassed by a Chinese warship near the Scarborough Shoal (Panatag Shoal) last Sept. 30.
— Philippine News Agency

Antique hopes to boost food security with guv back at RDC helm
Antique is hoping to boost its food security plan with the re-appointment of Governor Rhodora Cadiao as chairperson of the Regional Development Council (RDC) from 2019 to 2022.
— Philippine News Agency

DICT to set up free Wi-Fi zone in NegOcc Capitol
The Department of Information and Communications Technology (DICT) is preparing to set up a free Wi-Fi service within the provincial capitol building and lagoon here.DICT-Negros Occidental Romeo Tome said the first access point has already been installed inside the building, as of Monday.
— Philippine News Agency

Regular pay for village execs seen to perk up service delivery
Giving regular salaries and benefits to barangay officials will empower them to perk up delivery of basic priority services down to the grassroots in the country’s 42,045 villages, the top presidential aide in the Visayas on Monday said.
— Philippine News Agency

DOLE field officer shot dead in Manila
An employee of the Department of Labor and Employment (DOLE) Manila field office was shot dead on Monday afternoon, November 4, in Malate.
— Rappler

MRT train emits smoke, 530 passengers unloaded
SOME 530 passengers had to be unloaded when a north-bound Metro Rail Transit 3 (MRT-3) train emitted smoke at Santolan-Annapolis station on Monday. In a statement on the train line’s social media platforms, a driver reported smoke emitting from one of its trains at 4:08 p.m. on Monday.
— Manila Times

2 Filipino doctors chosen among next generation of IAP Young Physician Leaders
The next generation of physician leaders has already been selected for this year’s InterAcademy Partnership’s (IAP) Young Physician Leaders (YPL) Programme. Two Filipino physicians made the cut and will join 20 other outstanding early career physicians in Berlin, Germany, on October 22 to 24, 2019, in conjunction with the leading international forum for global health, the World Health Summit.
— Rappler

Robredo asks PET for extension of deadline to submit memorandum on manual recount results
Vice President Leni Robredo has asked the Supreme Court, sitting as the Presidential Electoral Tribunal, to give her time to file her memorandum in relation to the poll protest filed by former Senator Bongbong Marcos against her.
— Eagle News

Cayetano has ‘personal complaint’ over ABS-CBN franchise renewal
Speaker Alan Peter Cayetano said he has a personal complaint against the bill that would renew ABS-CBN Corporation’s franchise, but he promised the House of Representatives would be fair in tackling the measure .
— Rappler