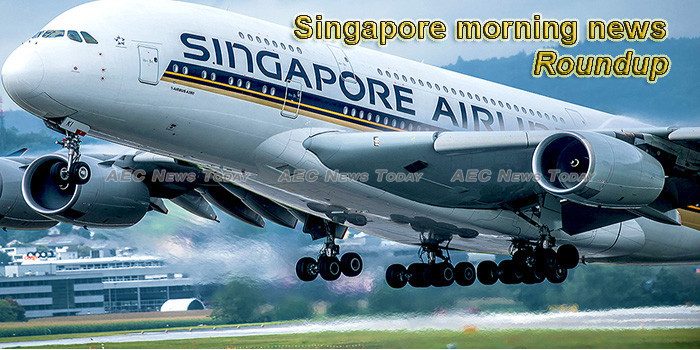 Singapore police crush vice syndicate with China’s help
A transnational vice syndicate has been smashed in a joint operation by the Singapore Police Force and China’s Ministry of Public Security (MPS).
— The New Paper

Trade war ceasefire sparks stock rally across Asia
Shares rebounded across the region yesterday after the trade war truce between the United States and China and an oil price rebound sent relieved investors racing back to the markets.
— Straits Times

Singapore’s US$200k starter salaries: Why education pays the price
An academic arms race is raging – and it is bad news for everybody.
— South China Morning Post

COI conclusions have completely missed addressing the culture of fear
The high profile committee of inquiry (COI) for the biggest hack to ever hit Singapore in the form of the widely publicised SingHealth data breach is finally wrapped up with a summary of recommendations put forth.
— The Online Citizen

Bicentennial logo launched, design reflects 700 years of history
As efforts ramp up to commemorate the 200th anniversary of the arrival of Sir Stamford Raffles in Singapore, the office in charge of next year’s activities has launched the bicentennial logo.
— The Straits Times

What happened to the values which our Founding Fathers built this nation?
Dear Fellow Singaporeans, It has been a turbulent period for both TOC’s Mr Terry Xu and myself, since our undue “arrests” a fortnight ago.
— The Online Citizen

PM Lee says will lead PAP in next election, but 4G leaders will be ‘in the thick of things’
Prime Minister Lee Hsien Loong says he will still take the lead for the People’s Action Party at the next General Election in terms of setting the agenda, working out the policies and campaigning for the party.
—Channel News Asia

Potential issues in a Heng succession
The murky waters in and around political succession in Singapore seems to have cleared up somewhat. Speculation on whether former army man Mr Chan Chun Sing (Chan) would take top spot has cooled with the announcement by current Prime Minister Lee Hsien Loong (PM Lee) that the 4G political office holders have chosen Finance Minister Heng Swee Keat (Heng) as their leader who has in turn asked Chan to be his deputy.
— The Online Citizen

Molotov cocktail thrower pleads guilty
On the orders of a loan shark, a young man flung a lit Molotov cocktail at the front door of his neighbour’s flat, which caused a stationary electric bicycle nearby to explode.
— The Straits Times

Hospitality sector could get a RevPar boost by 2019
A muted supply increase in hotel rooms combined with the rise of demand from the leisure segment could work well for hotels’ RevPAR.
— Singapore Business Review

SembMarine may turn in operating profits in 2019 as work ramps up
Now that a large chunk of projects on Sembcorp Marine’s multi-billion-dollar order book is under construction, its management is optimistic that the large-cap offshore and marine group may turn profitable at the operating level next year.
— The Business Times

Millennials in Singapore eager to ride on digitalisation wave
Amid the local workforce’s increasing interest in digital talent, tertiary students in Singapore have been taking an interest in studying Computer Science/Information Technology and Information Systems courses, according to findings from the 2018 BrightSparks Scholarship and Education Survey.
— The Edge

30 Singapore shares that could go on to crush the market in December 2018 and beyond
The Straits Times Index (SGX: ^STI) has rallied 2.1% as of the time of writing today. The spike comes after US President Donald Trump and Chinese President Xi Jinping agreed to a truce on the trade war over dinner on Saturday after the G20 summit.
— Motley Fool sg

Meet Singapore’s robotic police task force
An autonomous car with large wheels, and bearing the police stripes, zips past pedestrians in a neighbourhood. The patrol robot is the newest addition to the Singapore Police Force, keeping a watch on all that it sees and hears.
— Gov Insider

The banana money trail: Prices rising in Singapore, but farmers not gaining
The cost of bananas from the Philippines has shot up, but farmers are struggling with losses, so where is the money from consumers going to, ultimately?
— Channel News Asia

Singapore may allow import of Hong Kong roast goose and other roast meats
Singaporeans who hunger for Hong Kong’s roast meat, especially its famed roast goose, may soon have their fill of it without having to visit the territory.
— The Straits Times

7 in 10 Singapore women worry about affordable healthcare after retirement
2 in 5 of them are either not checking how much they’ve put in for retirement or have no contributions at all.
— Singapore Business Review

$366,000 lost to ‘God of Fortune’ 4D lottery scams between Jan and Oct: police
Thirteen reports of 4D lottery scams, involving some $366,000, were received between January and October this year, said the police on Monday (3 December).
— Yahoo News

MacPherson at 50: Remembering the past and forging the future in one of Singapore’s first HDB estates
As one of Singapore’s oldest public housing estates celebrates its 50th anniversary, measures are in place to ensure it retains its appeal for residents and has a vibrant and viable future.
— Channel News Asia

SS Scuba pays price for illegally selling travel
SS Scuba Pte Ltd has been convicted in the State Courts, 28 November, for carrying on the business of a travel agency without a valid travel agents licence, Singapore Tourism Board reported, Wednesday.
— TR Weekly

NEA, AVA to prioritise checks on food caterers during festive season
There will be increased checks on food establishments during the festive season, the National Environment Agency (NEA) and the Agri-Food & Veterinary Authority of Singapore (AVA) said on Monday (Dec 3).
— Channel News Asia