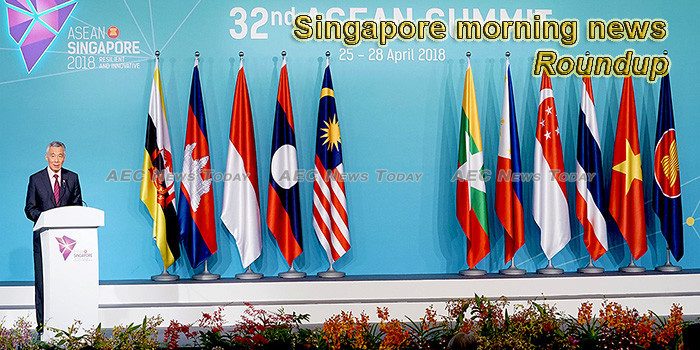 A new maritime dispute: Issues of nationalism and sovereignty fray Malaysia-Singapore ties
As Malaysia withdraws its challenge against Singapore on the Pedra Branca ruling, another high-profile maritime spat has been ignited.
— Asean Today

Indonesia tsunami: Singapore leaders express condolences
Singapore leaders on Sunday (Dec 23) expressed their condolences after a tsunami struck coastal areas around the Sunda Strait between the islands of Sumatra and Java in Indonesia on Saturday night. At least 200 people have died and hundreds more have been injured, according to Indonesian authorities.
— Channel News Asia

2018: Fighting the stifling dark forces of Darth Vader in Singapore
This was how I summed up 2017 at the end of that year: “We are truly in the post-Lee Kuan Yew era. Almost all the significant events that have taken place point sadly to a decline in a perception that Singapore is in the hands of an exceptional leadership.”
— The Independent

What next for smart nation Singapore? Getting citizens and SMEs to embrace digital
Mr Chan Cheow Hoe, the country’s first Government Chief Digital Technology Officer, is pushing for more in the civil service to think of citizens as their “customers” when developing digital services, but also asks for people’s patience when these services do go down.
— Channel News Asia

When Singapore heats up, poorer households use more water, richer ones turn up the air-con: Study
Sunny Singapore can get a little too hot sometimes. And when it does, citizens seek refuge in air-conditioned rooms and take showers.
— Business Insider

Commentary: That Singapore must cope with food disruption and vulnerability is our reality
Singapore has excellent logistics, infrastructure and a trade eco-system, but we cannot assume there would no disruptions to our food supplies, says Paul Teng.
— Channel News Asia

Under-16s can still ride e-scooters under new rules
Children aged under 16 will still be able to ride e-scooters despite a new requirement that kicks in on Jan 2 for people aged 16 and above to have the vehicles registered.
— Straits Times

Stopping stray UAVs in Singapore
Measures are in place in Singapore to prevent illegal drone use like that which disrupted flights at London’s Gatwick Airport for 36 hours from last Wednesday.
— Straits Times

Harsher punishment for security officers who sleep on the job or act unprofessionally from Jan 1
Private security officers who slack off, sleep on the job or come to work drunk can face tougher punishment from next year, as the police seek to boost the industry’s professionalism and bolster Singapore’s defences.
— Straits Times

GovTech partners with hackers to uncover weakness, avoid getting hacked
A joint press release by the Government Technology Agency of Singapore (GovTech) and Cyber Security Agency of Singapore (CSA) reveal the government’s collaboration with local and overseas ethical hackers to search for vulnerabilities in SG’s IT systems for a fee.
— The Independent

SG is world’s 3rd richest country based on GDP
Based on an International Monetary Fund report, size is not always equivalent to wealth or scarcity when it comes to the world’s richest or poorest countries. With Gross Domestic Product (GDP) pegged to the purchasing power parity (PPP) per capita, the IMF declared Singapore the 3rd richest country in the world. In 2017, the small […]
— The Independent sg

Muted trading expected in Asian markets this week
Markets in Singapore and across most of Asia look set for quiet trading this week as worries continue to mute investors’ appetites for eating, drinking and merrymaking.
— Straits Times

Ensign sees big potential in Asia cybersecurity
The official inquiry into June’s SingHealth cyber attack has yet to submit its report, but a clear message has emerged from the extensive sessions – cybersecurity needs to be taken more seriously in Singapore.
— The Business Times

Ailing firms find new lease of life in real estate
When the going gets tough, many companies turn to property as a possible panacea – with several of them unveiling plans in recent months to diversify into the sector.
— The Business Times (paywall)

The Big Read: Breaking Singapore’s workaholic culture
For Singapore workers to continue putting in the same long hours as their cohorts of yesteryear would mean less or even little time to care for their ageing parents, experts say.
— Channel News Asia

Changi passenger traffic up 4.5% in November
Traffic to and from India jumped 14%, making it ahead of Changi’s top 10 markets.
— Singapore Business Review

SoftBank Vision Fund in talks to invest $1.5b in Southeast Asia’s Grab
SoftBank Group Corp is nearing a deal to invest $1.5 billion in Grab, three times a previously expected $500 million, as Southeast Asia’s biggest ride-hailing firm looks to expand, a person with knowledge of the matter said.
— Deal Street Asia

Tech: Year of smart moves
Big steps in the e-payments scene here were made in 2018, as Singapore moved closer to its aim of becoming a cashless society.
— Straits Times

Pair of rental-flat-living “kaypoh makciks” turned a drug-ridden estate in S’pore into a big family
They may be low in income, but their love for their neighbours overflows in richness.
— Mothership

Why Millennials Should Start Investing Immediately
The earlier you start investing, the earlier you can reach your financial goals.
— Motley Fool sg

StarHub launches entertainment awards show at MBS in Singapore
Telco StarHub brought together some of Asia’s leading entertainment personalities at the Marina Bay Sands in Singapore for its inaugural ‘Night of the Stars’ awards on December 22.
— Mumbrella

‘I cried every day’: Why Singapore’s vets might be depressed
Studies around the world have long indicated a greater tendency for animal doctors to take their own lives. Now, in Singapore, the issue of mental well-being in the profession is slowly coming into focus.
— Channel News Asia

Low-GI meals put to the taste test
Close to half a million people in Singapore have diabetes, while another half a million are at high risk of getting it.
— Straits Times

Reindeer magic
A photo illustration of sculptural reindeer antlers against a bokeh effect of yellow-orange lights for the festive season.
— Straits Times