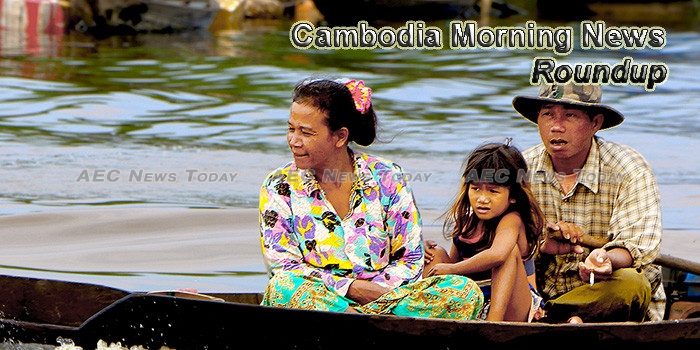 Why The Cambodia Daily Must Pay Its Tax Bill or be Shutdown
Unless an (unlikely) miracle occurs, when tomorrow’s edition of The Cambodia Daily rolls off the printing press it will be the end of a tradition. Presented with a $6.3 million tax bill at the beginning of last month, the 24-year-old publication will close; and with it a big chunk of modern-day Cambodia journalism history.
—AEC News Today

Cambodia’s Worrying War on Free Speech
The Hun Sen government is attempting to do through legal means what it had once done through violence.
—The Diplomat

Cambodian paper shuts with ‘dictatorship’ parting shot
One of Cambodia’s most stridently independent newspapers, The Cambodia Daily, published its last edition on Monday with the headline “Descent Into Outright Dictatorship” as it closed amid a crackdown on critics of Prime Minister Hun Sen.
—Reuters

Sokha arrested for ‘treason’, is accused of colluding with US to topple the government
Police yesterday arrested Cambodia National Rescue Party leader Kem Sokha over allegations of treason, with Prime Minister Hun Sen accusing the opposition president of conspiring with the United States to oust his regime.
—The Phnom Penh Post

Capital’s mobile F&B chains show signs of settling down
Mobile food and beverage carts are doing brisk business, filling gaps in the country’s crowded matrix of restaurants and cafés, and competing on price and convenience.
—The Phnom Penh Post

Starbucks here for the long haul
US-based coffee giant Starbucks first entered the Cambodian market in 2015 with a small kiosk in Phnom Penh’s airport terminal. Since then it has expanded in the capital, while opening its first branch in Siem Reap last month.
—The Phnom Penh Post

ANA marks one year since expanding flight route to Cambodia
It has already been one year since Japanese airline All Nippon Airways (ANA) started daily flights between Tokyo Narita airport in Japan and Phnom Penh through its Star Alliance carrier, and the company says it is committed to expanding its services in the Kingdom in the future.
—The Phnom Penh Post

Malware vulnerability high in Kingdom, report notes
Cambodia is among the most vulnerable countries in Asia when it comes to viruses, spam, spyware and other cyberthreats, according to a recent report from Microsoft.
—The Phnom Penh Post

Videos of Blinged-out Weddings of Cambodia’s Elite May Damage Ruling Party’s Brand
When two scions of the ruling Cambodian People’s Party (CPP) elite wed in June, they posted a series of videos on YouTube and Facebook celebrating their union — and their wealth.
—VOA Cambodia

Indonesia Morning News For May 16