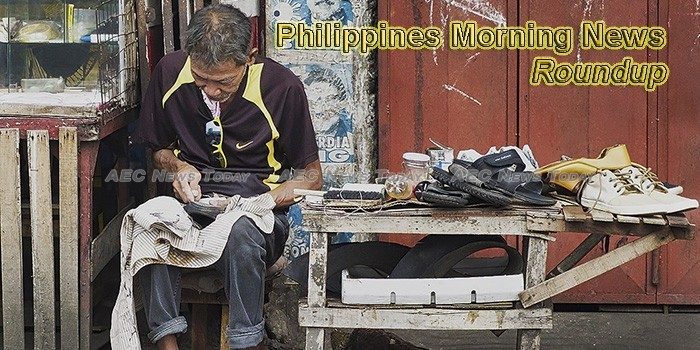 Global Ferronickel to raise over P500 million from share sale
GLOBAL FERRONICKEL Holdings, Inc. (FNI) has priced its follow-on share sale at a discount, which will allow it to raise just over P500 million or half of its original target of P1 billion.
— BusinessWorld Online

5 PH universities among the best in S.E. Asia
Five universities in the Philippines notched spots in this year’s Quacquarelli-Symonds (QS) University Rankings.
— Manilastandard.net

IN 5 YEARS: 3rd telco must invest P200B
Companies vying for the slot of the Philippines’ third telecommunication player are expected to spend at least P40 billion a year for the medium term — or the equivalent of P200 billion in five years — and provide service to at least 30 percent of the population each year, the Department of Information and Communications Technology (DICT) said.
— Malaya

DoE upbeat on adding 10,000 MW to supply
THE Department of Energy (DoE) on Tuesday expressed confidence that it would add about 10,000 megawatts (MW) by 2021 to bolster the Philippines’ power supply.
— The Manila Times

Philippines plans to borrow from China-led AIIB
The government is eyeing possible loan assistance from China-led Asian Infrastructure Investment Bank (AIIB) for the construction of health care facilities, school buildings and roads in the country, according to the Department of Finance (DOF).
— The Philippine Star

EU donates new equipment to boost BI’s border security mission
The Bureau of Immigration (BI) has received from the European Union (EU) brand-new equipment and gadgets to boost its border patrol mission and prevent the entry of undesirable aliens.
— Inquirer.net

PET fines Marcos, Robredo P50,000 each for violating subjudice rule
THE Supreme Court sitting as the Presidential Electoral Tribunal (PET) ordered the camps of former senator Ferdinand Bongbong” Marcos Jr. and Vice President Maria Leonor “Leni” Robredo to pay a fine of P50,000 each for violating the gag order it issued in February in connection with the ongoing recount of votes for the 2016 vice presidential race.
— Business Mirror

Boracay crime rate down by 80% since closure
Index crimes or crimes committed against persons and property in Boracay dropped by almost 80 percent since the world-famous island-resort was closed to tourists.
— The Philippine Star

Gov’t rejects all tenders for T-bonds as rates rise
THE BUREAU of the Treasury (BTr) rejected all bids for the five-year bonds it offered on Tuesday as the market sought higher rates due to expectations of more policy adjustments from the local central bank.
— BusinessWorld Online

Foreigners still banned from owning lands even under federal gov’t
Full foreign ownership of lands in the country will still not be allowed even under a federal form of government and that the national government would still hold the majority in revenue allocation, according to the draft on the reforms in the economic provisions under the proposed shift to the federal structure of government.
— Manila Bulletin

Drug tests for President, other execs, backed
Several senators have backed a proposal for all public officials, from the President down to the village councilors, to undergo mandatory drug testing, saying this would allow the officials to set an example for the public amid the government’s campaign against drugs.
— Philippine Daily Inquirer

PH still far from becoming PWD-inclusive, says UP study
Only 60 percent of local government units have a Persons with Disability Office (PDAO), according to a study by the UP Center for Local and Regional Governance (UP CLRG) on persons with disability (PWD) inclusion in the Philippines.
— Rappler

Palace backs arming of priests: ‘If they qualify, there’s no problem’
Malacañang on Tuesday expressed support for applications of priests and religious workers to carry firearms outside their homes for self-defense amid concerns of the killings of Catholic priests in the past months.
— Philippine Canadian Inquirer